Riparian (river and streamside) vegetation provides habitat for many species of breeding, migrating, and overwintering birds. In the western United States, riparian zones make up <1% of the land area, yet they support the most diverse bird communities in the Pacific Northwest. The structurally complex and diverse plant communities that make up riparian habitats are among the most vulnerable country-wide and in this region. Therefore, the protection and restoration of riparian habitats is a priority.

While most of our landscapes in the Western United States are dominated by plant communities that are tolerant to dry conditions (e.g., coniferous woodlands and grasslands), the riparian habitats along our rivers, streams, and freshwater lakes are characterized by broad leafed trees and shrubs that are associated with wetter conditions (e.g., willows, alders, big leaf maple, cottonwoods, and ash). These deciduous plant communities make up small pockets of riparian habitats that are essential to many bird species year round. The plant communities are rich in insect life and therefore insect eating birds such as warblers, vireos, and flycatchers are abundant in riparian areas. Many songbird species, including Tree Swallows, Warbling Vireos, and Yellow Warblers breed primarily in riparian habitat, feeding their chicks on the massive influx of insects in late spring. During early spring and fall, riparian areas provide essential stopover habitat for a huge variety of migrating birds including Orange-crowned and Wilson’s Warblers. Songbirds that migrate to overwinter in the lower Pacific Northwest from their northern breeding grounds (e.g., Golden-crowned Sparrows) take advantage of the seeds and berries produced by riparian plants. In addition, resident birds such as Black Phoebe and Song Sparrows rely on riparian areas year round. Riparian habitats in the Pacific Northwest have been heavily degraded or completely lost due to human activity. The most significant threats to these important habitats are agriculture and urban development. Other threats include logging, mining, and invasive species. Agricultural areas most often occur along our rivers where nutrient rich soils are concentrated; therefore agriculture can alter natural floodplains and impact riparian vegetation. In addition, fertilizer and livestock feces can pollute our rivers and riparian systems, which further damages habitats and disrupts food webs. Urban centers in the West are almost always located near rivers, placing additional demands on the resources rivers provide. Urban development often results in the complete loss of riparian habitats. Invasive species also degrade riparian habitats. For example, the now ubiquitous Himalayan blackberry forms dense thickets in riparian areas, displacing native vegetation. The many threats to riparian habitats have added up to the loss or degradation of a huge proportion of riparian habitat in the Pacific Northwest.

Bird species that rely on riverside vegetation are heavily affected by the removal and alteration of riverside habitats. Yellow-breasted Chats and Willow Flycatchers are two Oregon Conservation Strategy species that rely totally on riparian vegetation to breed in the West. The Yellow-billed Cuckoo, a candidate for Washington Species of Greatest Conservation Need, used to breed in riparian areas of Washington, but are now only a rare summer visitor and migrant. With the recent publication of research indicating the alarming loss of birds (especially songbirds) nationwide, it has never been more important to protect the key breeding, migration, and overwintering habitat that riparian areas provide year round. The widespread loss and alteration of riparian habitat also has far reaching consequences on many other native Pacific Northwest fish and wildlife species. For example, healthy riparian habitats are essential for the survival of our at-risk salmon populations. Healthy riparian vegetation improves in-stream conditions for these fish by cooling stream temperatures through shading, filtering agricultural runoff, and providing a source of large woody debris and in-stream nutrients. In turn, these anadromous fish are a critical part of the riparian ecosystems. These fish spend most of their lives in the Pacific Ocean, however, they migrate upstream to breed and die in our rivers and streams, bringing with them nutrients that are essential to the health of our watershed. Declines in salmon populations mean a decline in nutrients, which negatively effects other wildlife, especially mammals and birds.

Healthy riparian habitats benefit birds, fish, and other wildlife, and they benefit humans. Riparian vegetation is critical for maintaining water quality and recharging groundwater, which we rely on for clean drinking water, safe aquatic recreation, productive fishing, and more. In addition, it protects riverbanks from erosion and provides a buffer during flood events, ultimately protecting our homes, property values, and our safety. 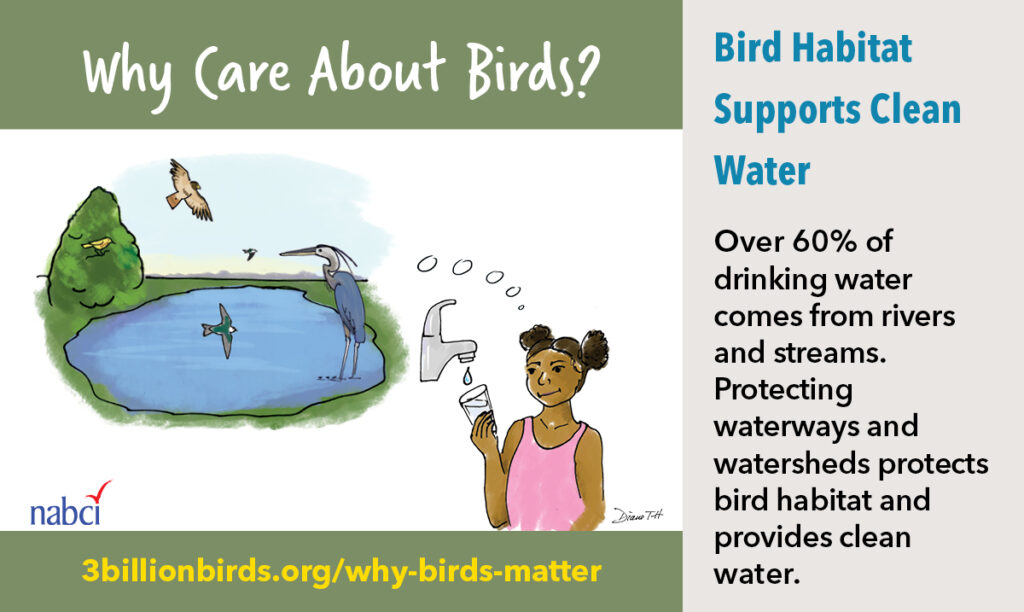 Healthy riparian areas are important in wilderness ecosystems and rural areas, and they also provide excellent wildlife habitats, as well as recreation opportunities, in urban areas. Urban riparian areas serve as important wildlife corridors by providing green space in otherwise developed landscapes. Riparian areas also offer excellent birding and nature viewing opportunities, often within easy access of urban centers. In many urban areas throughout the Pacific Northwest, restoration projects are in progress to mitigate some of the damage done to these crucial habitats and to improve access to natural spaces for city residents.

Fortunately, a growing number of people recognize the importance and fragility of riverside ecosystems. Watershed councils, state agencies, and environmental nonprofits throughout our region are working to restore degraded riparian areas and ensure that remaining riparian vegetation continues to provide crucial wildlife habitat. Protecting and restoring riverside vegetation both in our wild lands and in our cities is essential for maintaining healthy populations of a huge proportion of our birdlife, and can enrich the quality of life for human residents as well. While there are many approaches to wildlife conservation, Partners in Flight Conservation emphasizes “focal species” and draws attention to habitat attributes most important in a functioning riparian ecosystem. Focal species are highly associated with particular habitat features or conditions. By managing for these focal species, other species with similar habitat needs may also be conserved.