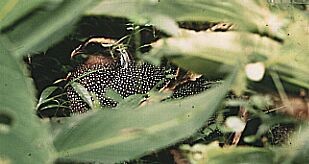 A large brown pheasant of low hill forest, as well as the transition zone from lowland to hill forest. Shy and extremely difficult to see, and highly restricted in range. Most sightings are at dancing grounds, where males have cleaned the leaf litter from a large patch of the forest floor. Male has a gigantic tail longer than his body and a very long crest that is dark on the top and white below. Female is much smaller and shorter-tailed. Males give long, loud whooping vocalizations during the breeding season. Similar in shape and size to Great Argus, but separated by many details, including the less extensive and duller bluish facial skin, the more complicated facial pattern and crest, and the duller pinkish-colored rather than reddish legs.