Birds and their sounds have been a part of the arts for centuries. In 1924 Ottorino Respighi requested that a recording of a nightingale be played in his composition The Pines of Rome. Respighi’s artistic choice was controversial at the time; his contemporaries thought it more appropriate to use the orchestra to imitate bird song than an actual recording. Respighi, however, was determined to use a real bird’s vocalizations—his bird had to speak for itself. His use of a Common Nightingale’s song was likely the first-ever example of pre-recorded audio in the concert hall.

[T]here is the consummate knowledge of music in a single bird… briefly [are] all the devices in that tiny throat which human science has devised with all the elaborate mechanism of the flute. (Pliny the Elder)

Since then, the influence of bird vocalizations in art has been particularly broad and wide-ranging. And sound archives like the Macaulay Library are a source of that inspiration for many artists.

A multimedia archive housing over 800,000 audio recordings of birds, the Macaulay Library at the Cornell Lab of Ornithology is a true treasure trove of avian diversity. Although many people only recognize the collection’s research and educational potential, numerous artists have taken advantage of the archive to create enriching works of art, from music to film, and poetry to sculpture. By incorporating bird sounds in their art, artists hope to draw attention to environmental issues, foster an appreciation for nature in a broader audience, and create space for deeper reflections.

As a vital piece of our planet’s biodiversity, birds are like a strand in a huge, beautiful, complex tapestry and art can help us connect with them in different ways. Musician, recordist, and soundscape ecologist Bernie Krause likes to remind his listeners of the bigger picture, or the “The Great Animal Orchestra.” To him, a soundscape (such as one might hear while standing in a forest) is a single unit, and birds are simply part of that whole, just as the violins are one element of the entire orchestra. In our current biodiversity crisis, this reminder is especially pertinent. If we lose one part of the orchestra, we lose an irreplaceable part of the whole, and eventually the entire masterpiece may fall apart. Art offers another way to connect with nature—to understand it and to cherish it.

“Art speaks to our innate desire to express ourselves,” says Ben Mirin, an ethnobiologist and sound artist currently pursuing a PhD at Cornell University. For Mirin, also known as DJ Ecotone, this involves a unique combination of beatboxing and wildlife (especially bird) sounds. When he first began experimenting with bird sounds in New York City, he used Macaulay Library recordings to create beats for his hip-hop shows. Since then he has appeared on television for National Geographic, given multiple TED talks, and served as the first Artist in Residence at the Bronx Zoo. Mirin’s insatiable desire for new sounds lands him in the furthest reaches of the forest, such as Madagascar and Borneo, where he eagerly records treetop hoots and screeches with his parabolic microphone. Ultimately, he hopes to bring his world of sounds down to those otherwise unable to hear them. In a world of cities, smog, and smartphones, it can be difficult to discover the riches of the outdoors first-hand. Experiencing “The Great Animal Orchestra” isn’t always easy.

Seven-time Grammy winner Paul Winter, often considered the pioneer of “earth music,” brings nature to even more people. His diverse experiences have set him on a collision course with both human and (non-human) animal sounds. In his recent composition “The Well-Tempered Wood Thrush,” Winter weaves a Macaulay Library recording of a Mourning Dove with his own recording of a Wood Thrush. These birds’ aural dance with the arpeggios of the saxophone breathe freshness and freedom, and, for some, offer an intimate connection with the earth we call home. Many of Winter’s compositions feature music from the Macaulay Library, each with its own unique ties to place, species, and beauty.

“Earth Music” is also making its way into the electronic scene. A group of musicians and DJs recording under the name Shika Shika released two albums featuring bird songs and calls from the Macaulay Library to raise awareness of endangered species in Central and South America. They turned bird sounds into danceable electronic beats and the proceeds from the albums go straight to local conservation organizations.

Bird sounds are also essential for creating a poignant scene in the movies and theater. Fawkes in the Chamber of Secrets screams a dramatic Limpkin call from the Macaulay Library as the phoenix comes to Harry Potter’s aid in the boy’s time of desperate need. Indiana Jones, Ratatouille, and The Big Year also utilize recordings from the Macaulay Library.

In the play “Raven Brings Light to the People,” by the Kakeru Physical Theater Company from Shearwater Productions (Ithaca, NY), Macaulay Library sounds were the backdrop to their reenactment of a First Nations’ story. “Kakeru performs stories that illuminate the world we live in: earth and environmental sciences, plant and animal physiology behaviors,” Artistic Director Holly Adams says in a video about the project. Audio of birds helps her company connect their audience with the world.

Bird sounds also make their way into poetry. “The nighthawk’s cold voice split open the night,” writes Sarah Rackowski in her poem “The Nighthawk,” a piece as evocative as any movie. Its vivid descriptions are bolstered by her careful attention to Macaulay Library media, including several recordings. “I needed information on exactly how common and Antillean nighthawks fly and the vocalizations they make while in the air,” Rackowski explains. Artists like Rackowski rely on the Macaulay Library to accurately depict birds in their art, as precision is important for many artists. 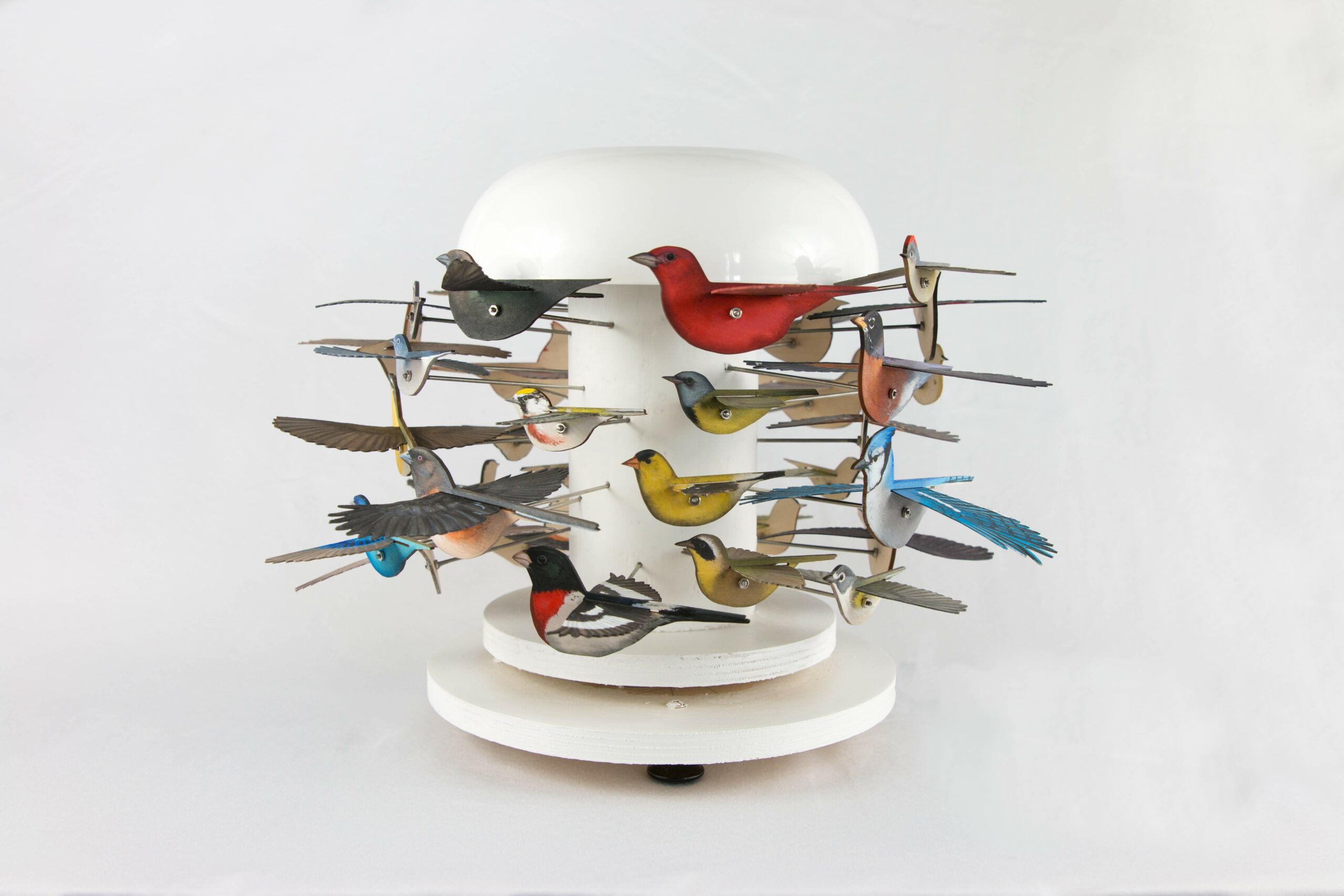 Even physical art can benefit from a catalogue of sounds. Shae Warnick created “Alexander’s Dawn Sonata” from paper, wood, and recordings from the Macaulay Library. On her website, Warnick explains her ideas behind the project: “inspired by old Victorian bird trees and toy carousels, these birds swarm together in a twirling mass and sing a dawn chorus that represents a fanciful version of what [Victorian naturalist Alexander Wilson] might have heard at the turn of the 19th century.” (Watch “Alexander’s Dawn Sonata” in action.) Warnick also designed a unique pillow, called “Alexander’s Nocturne,” that plays Macaulay Library recordings of nocturnal species.

Bald Eagle by Elizabeth Turk from the series: Echoes of Extinction. Photo by Eric Stoner, courtesy of Hirschl and Adler Modern, New York

Sculptor Elizabeth Turk uses the Macaulay Library to illuminate the problem of extinction, an ever-growing issue in current times. She creates visual representations of bird song, relying on the waveforms of extinct and endangered species to craft oscillating pillars in her project Echos of Extinction. On Catalina Island in California, Turk also made an interactive exhibit called Tipping Point, where sound sculptures of threatened species, based on vocalizations from the Macaulay Library, mix with cages, mirrors, bird silhouettes, and dancers. Turk’s exhibit emphasizes humans’ involvement in the natural world and asks, “is the environment at a tipping point because of humanity’s choices?” Turk’s goal is to create an empathic response to nature, and she increases her impact by letting visitors “experience sound through movement and thoughtful action, not just a visual acceptance of extinction.” When we see beauty, we do not wish for its extinction, and when we “see” bird song through Turk’s art, we hope our legacy is not its silence.

It is our duty to give back to those avian muses who have given us so much—not extinction or silence, but life and abundance. Mirin agrees, and he notes that art and what we call science shouldn’t be so separate after all. “Art is universal, born from raw human experience,” he says; “and it can be a bridge into the world of science that allows more people to engage and ultimately to have a voice in building knowledge and improving the future of our planet.” In a world where science, even conservation, can sometimes feel distant and elitist, music and other art build bridges and fuel connectivity. Or as Stephen Jay Gould put it, “we will not fight to save what we do not love.”

The next time you come across a recording of a nightingale, play it and listen. How does its song stir you?