Unlocking the mysteries of nature is what biology is all about. Scientists are constantly assessing and reassessing the assumptions and techniques they use to learn about the organisms they study. Oftentimes this search for knowledge is like a puzzle, finding the pieces that fit together in the right sequence to create new knowledge. Like puzzles, this search can lead to dead-ends and frustrating moments too. Researchers at the University of Montana Bird Ecology Lab recently attempted to understand a new technique for determining the age of Black-capped Chickadees, a key step in understanding the population dynamics of bird species.

Much like social scientists studying human populations, biologists are interested in tracking changes in populations of animals. In order to do so they must be able to accurately describe a population’s demographics, such as what are the ratios of males to females? Young birds to older birds? A recent landmark study showed rapid declines in North American bird populations over the last 40 years. Building an accurate demographic profile is the first step to understanding these declines. A key 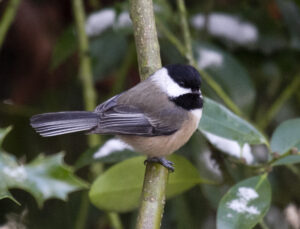 source for these vital rates in songbirds is data from bird banding stations. Scientists catch birds in specially designed nets called mist-nets. After retrieving a bird from a net, researchers place a small aluminum band on the bird’s leg with a unique 9-digit number, marking the bird as an individual. After placing a band on the bird, scientists attempt to determine the age and sex of the bird.

Scientists have a variety of techniques to determine a bird’s age. The Identification Guide to North American Birds, Part 1 by Peter Pyle (often referred to as The Pyle Guide) is the primary source of aging and sexing techniques, as well as species specific information, for bird banders in the US and Canada. However, aging birds is not as straightforward as counting the rings on a tree. Pyle cautions that “determinations should be based on a synthesis or combination of all available characters…” Imagine trying to determine the age of a group of strangers solely through visual clues. Some might be taller or shorter, but there are tall kids and short adults. Some might have different color hair, but people gray at different ages. Only by combining a variety of traits could you arrive at estimates of the age of individuals in the group, perhaps only into general age-classes (child, young adult, middle aged, etc.). We often have similar issues aging birds, even while holding them in the hand.

A common technique for aging birds between the summer and early winter is examining their skulls. Like human babies, the bones in a newly hatched bird’s skull are not fully developed. Over the first six months or so of a songbird’s life they grow a second layer of bone in their skulls, a process that can be tracked through the translucent skin of most songbirds. Another common aging technique is analyzing a bird’s feathers. Like a bird’s skull, there are detectable differences between the feathers a bird grows in its first six months of life and subsequent molts.

Black-capped Chickadees defy both techniques. They are non-migratory cavity nesters that breed earlier in the spring than many migratory songbirds. As a result young birds finish growing the second layer of bone in their skulls by early fall. There is also less variation in the appearance of the feathers of younger and older birds than other species. “Chickadees are notoriously difficult to age by feather shape,” said Tricia Rodriguez, an Avian Ecologist at the UM Bird Ecology Lab. “And because their skulls are not always helpful, we wanted to investigate other techniques to age Black-capped Chickadees.” 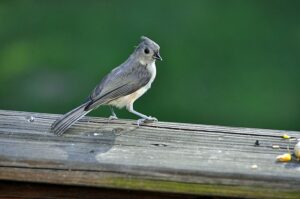 The Pyle Guide’s account for Black-capped Chickadees states that “the roof of the mouth color may vary with age”, a trait that holds true for species in the same Family as Black-capped Chickadees such as Tufted Titmouse. In Tufted Titmouse the lining in the roof of the mouth transitions from a grayish-pink in young birds to black by the time they are about a year old. The UM Bird Ecology Lab documented the color of the roof of Black-capped Chickadees mouths in birds whose age they were able to verify through skull examination. They collected this information from 185 birds (44 adults and 141 young birds) over the course of several years, scoring the color of the roofs of mouths on a 1-5 scale of lightness to darkness. They found that young birds tend to have lighter mouth lining color and older birds tend to have darker mouth lining color. And while that relationship was statistically significant, the variation was so high that they determined the color can only be used as a potential supporting character in aging chickadees. However, the Bird Ecology Lab did not consider the study a failure. “Now we know that what holds true for Tufted Titmouse does not hold true for Black-capped Chickadees” Rodriguez noted. “This will save other bird banders time when attempting to age this species and contributes to the information for the species – ultimately leading to better techniques for aging Black-capped Chickadees.”

*For more information about work at the UM Bird Ecology Lab, visit their Facebook page or via the web: http://hs.umt.edu/birdecologylab/. For the link to the publication, email megan.fylling@mso.umt.edu.