On the heels of its Mountain Bluebird record earlier this year, the recently completed fieldwork for the second Wisconsin Breeding Bird Atlas (2015–2019) now has another significant footnote — the state’s first confirmed breeding record of Black-bellied Whistling Duck (Dendrocygna autumnalis).

The Black-bellied Whistling-Duck (BBWD) has long been a species of the far south, the heart of its range occurring across Central America and barely extending into northern Mexico and south Texas. However, in recent decades this distinctive duck has expanded its range and increased in numbers across the southern United States. 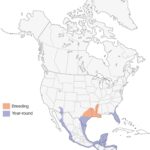 Known for wayward individuals wandering northward in spring and late summer, Wisconsin’s first record of BBWD came in 1998, according to the Wisconsin Society for Ornithology. After several additional records through 2002, the species has occurred more frequently over the past decade. Six records occurred from 2011–2014 and then in 2019, BBWD was documented in six Wisconsin counties, including an impressive group of eight birds in Outagamie.

In 2020, in addition to a long-staying Milwaukee bird, a single BBWD was reported in La Crosse first in early July and again in mid-August. Then, on September 11, Andrea Frisch spotted one at Myrick Marsh and spread the word to local birders. Gwyn Calvetti headed out hoping to find the bird, even though Andrea warned it had flown off. What Gwyn found was even more unexpected — an adult BBWD with at least 13 tiny chicks! 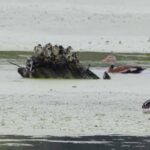 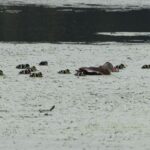 Gwyn Calvetti photographed Wisconsin’s first known family of Black-bellied Whistling-Ducks at Myrick Marsh in La Crosse on 11 September 2020. See all of Gwyn’s photos on this checklist.

Given its rapid range expansion, many birders and biologists predicted BBWD might someday nest as far north as Wisconsin. In 2019, multiple family groups were documented in Missouri and southwestern Illinois, both well north of typical breeding haunts. (Even more shocking were two families of Fulvous Whistling-Ducks at the Illinois site.) But no one expected this state first to come so soon. The location may also have been surprising to some as Horicon Marsh and other large wetlands in Wisconsin’s southeast glacial plain are known for attracting many rare waterbirds. The Mississippi River corridor, as seen in Illinois’s recent nesting records, does make sense, however.

The La Crosse brood was relocated later the same day by local birder, Dan Jackson. Subsequent visits have failed to find the family, although a single adult was detected several times. Interestingly, unlike most other ducks, this species has a strong pair bond so it’s possible this lone bird has been the male while the female may be tucked away nearby with her brood. Certainly, there are many remote areas where the birds could be finding food and shelter out of human sight. 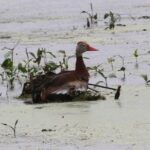 Visitors looking for this special family, which was spotted at the south end of the marsh north of the Myrick Park center, are encouraged to report their sightings to www.ebird.org/wi.