The 2019 Atlas Rally Series was a big success—participants gathered tons of data and had a blast doing it. This season will bring new events and locations.

When veteran birder Caroline Heald arrived at the Twin Lakes State Park Virginia Breeding Bird Atlas Rally in May of 2019, she didn’t know what to expect. On one hand, the 69-year-old had been birding for more than two decades—but had always done so alone. On the other, she’d only recently discovered Atlasing and the VABBA2.

“I was a little nervous going into the event,” Heald confides with a laugh. “I’d never birded with other people before, and, because I was so new to the Atlas, I worried about messing up, or slowing people down.” However, she was ushered into the fold immediately. Calling the rally “a true birds-of-a-feather situation,” though surrounded by new faces, she felt among friends.

“Everyone was so knowledgeable, and friendly, and welcoming, and helpful, my reservations just evaporated,” says Heald. “It was clear we were there because of our mutual love of birds, and our desire to contribute and make a difference.”

She joined a team of about 20 Atlasers hailing from throughout the state and points beyond. Splitting into small groups, they canvassed under-birded—and, in some cases, totally ignored— priority blocks in the park and surrounding areas. Together, the group made significant progress in more than 10 blocks. They focused on early successional habitats and found breeding evidence for many species, including Yellow-breasted Chats, Prairie Warblers, Grasshopper Sparrows, Blue Grosbeak, Bobolink, Summer Tanager and Loggerhead Shrike. Additionally, they recorded the first county record for a Mississippi Shrike and logged much-needed nocturnal birding hours.

“Twin Lakes was the first rally of 2019 and it was a real success,” says Peele. “It showed us that working in these under-surveyed areas pays off bigtime. The birds are there—we just have to get out into new areas and put the time in to find them.”

Speaking on a personal level, Heald calls the Twin Lakes Rally a fantastic learning experience. Over the course of the weekend, she had the chance to bird alongside VABBA2 director and avian ecologist, Dr. Ashley Peele, as well as regional coordinators like Lewis Barnett.

“Their level of knowledge was pretty awe-inspiring,” says Heald. “I picked up so many tips and tricks—it’s hard to believe it all happened in the course of just a few days. … I walked away energized and excited to take home what I’d learned.”

Heald was inspired and devoted the next 6-8 weeks to tackling incomplete priority blocks near her home in Castleton. Introduced to the rewards of birding with others, she partnered with a group of field-tripping Northern Virginia Atlasers to complete more high-priority blocks.

The latter was part of a larger, independent blockbusting initiative led by Region 2 coordinator, Kurt Gaskill. The effort mostly targeted areas of the state with large coverage gaps, but that were beyond easy reach for participants. Included were blocks in Alleghany County, on the Northern Neck, and in southside Virginia near Emporia. To increase the likelihood of detecting higher level breeding behaviors, Gaskill visited each on three separate occasions. The trips also included time for nocturnal surveying.

“This was a major  investment,” says Peele. “Kurt was driving hundreds of miles and making three multi-night trips per region to survey to these blocks.” Given his years of experience and  skill as a birder, “he was able to gather a great deal of valuable data.”

Heald says her experiences both with Gaskill and at the Rally have made her an infinitely better birder—and deepened her appreciation for VABBA2 citizen-scientists. Together, they’ve left her anxiously anticipating the 2020 season.

“I arrived at Twin Lakes with a very basic, and probably partially confused understanding of Atlasing,” says Heald. Working with other volunteers taught her to slow down and observe birds’ specific behaviors, versus simply tallying species. “I said to myself, ‘Wow, this is gonna bring a whole new dimension to my birding.’”

Heald’s intuition proved correct: Atlasing has since brought greater ornithological understanding and a deeper sense of intimacy between her and the birds.

“It’s like a gateway into the world of these beautiful animals,” says Heald. “I loved birds before, but now that love has grown even stronger. Learning to see how they interact with one another and the different habitats has been an incredible gift.”

Neither Heald’s glowing review, nor the success of the Twin Lakes event were isolated. (For more, read Peele’s highlights from the Hungry Mother, Natural Tunnel and Staunton River rallies.)

“Last year’s rally series brought major benefits,” says Peele. “We collected a ton of data where we needed it most and, better yet, we had a really great time bringing our volunteers together and working as a team.”

More than 50 participants attended an additional three events in state parks in southwest and southcentral Virginia. Together, they surveyed a whopping 76 priority blocks—most of which were previously untouched. They spotted an average of about 67 species per block, with observations of breeding activity numbering well into the thousands.

The push helped bring total VABBA2 block completion to more than 40 percent. Meanwhile, priority areas with less than half an hour of survey effort dropped from 27 percent to just 7 percent. 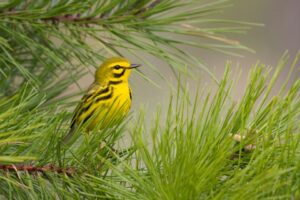 “Going into 2019, there was a troubling hole in our distribution data for these species,” says Peele. Detections were patchy, at best. “Now, because of our hardworking and dedicated volunteers, we’re starting to get a much clearer picture of the distribution of these birds, which is crucial to the project’s ultimate success.”

Some rally participants—like Carlton Noll of Richmond, or Charlottesville-based blockbusting duo, Guy and Susan Babineau—attended more than one event.

“I had such a great time at the first one, I decided to do to a second,” says Noll, whom was one of the VABBA2’s most prolific volunteer contributors in 2019. He enjoyed meeting other Atlasers and teaming up to gather data. “It was neat to work closely with people whose names I’d previously only seen on eBird, or on the [VABBA2] Facebook page. Everybody had different skillsets and backgrounds, and brought something unique to the table. We put in some serious birding hours, but we had so much fun along the way.”

The Babineaus together attended the Natural Tunnel rally and a blockbusting fieldtrip to the Northern Neck organized by the Virginia Society of Ornithology’s Meredith Bell. Guy flew solo for the Staunton River State Park event. Both enjoyed birding in interesting new areas and cited opportunities to socialize and work closely with other atlasers as a major draw.

“First and foremost, we had a fantastic birding experience,” says Susan. Breeding confirmations at Natural Tunnel alone included Wood Thrush, Black and White Warbler, Blue-Headed Vireos, and many others. “We also heard Swainson’s Thrush in rhododendron thickets along mountain streams, which was a treat, as none of our group had encountered them outside of the Great Dismal Swamp.”

Guy says the events introduced them to new friends too. They also enabled the couple to reconnect with a pair of former Blue Ridge Young Birders Club members, now college students working as VABBA2 field technicians.

“We had a blast at the group dinners and hanging out talking at campfires,” says Guy, whom took on partial coordination duties for Region 4 in 2019. He likens rallies to a bird club fieldtrip on steroids—and as the president of the Monticello Bird Club, he should know. “It’s great to be around like-minded people that’re so passionate and knowledgeable. It was really, really cool.”

Noll, Heald and the Babineaus say they look forward to attending as many Atlasing rallies as possible in 2020—particularly those in southwest Virginia. Their reasoning is twofold. First, the area boasts fascinating habitats and spectacular high-elevation species. Second, as of today, most of the region’s priority blocks remain less than 25 percent completed.

“The primary focus of this final season is going to be to survey as many incomplete blocks in the Mountain Valley Region as possible,” says Peele. The stakes are high, because “early trends in the Atlas dataset suggest that many of our high-elevation songbird species—for instance, Canada and Black-throated Blue Warbler—have similar, or possibly increasing distributions since the first Virginia Breeding Bird Atlas was undertaken 30 years ago.”

“It’s going to require a lot of effort to pull it off,” says Peele. “But if I’ve learned anything in these past four years, it’s that our volunteer birders are some of the most determined and hard-working people out there. I have confidence we can work together to make it happen.”