A grid of 1,302 atlas blocks overlay Maryland and DC and form the basic method of mapping each species’ distribution and breeding status. Each block is approximately 3 x 3 miles and is named after the USGS quad map it is in—each block is 1/6 of a quad map—and a two-letter direction indicates where in the quad map the block is. For example, a block in the southeast corner of the Kensington quad map is named “Kensington SE” while a block in the center-west of the Kensington map is named “Kensington CW”. 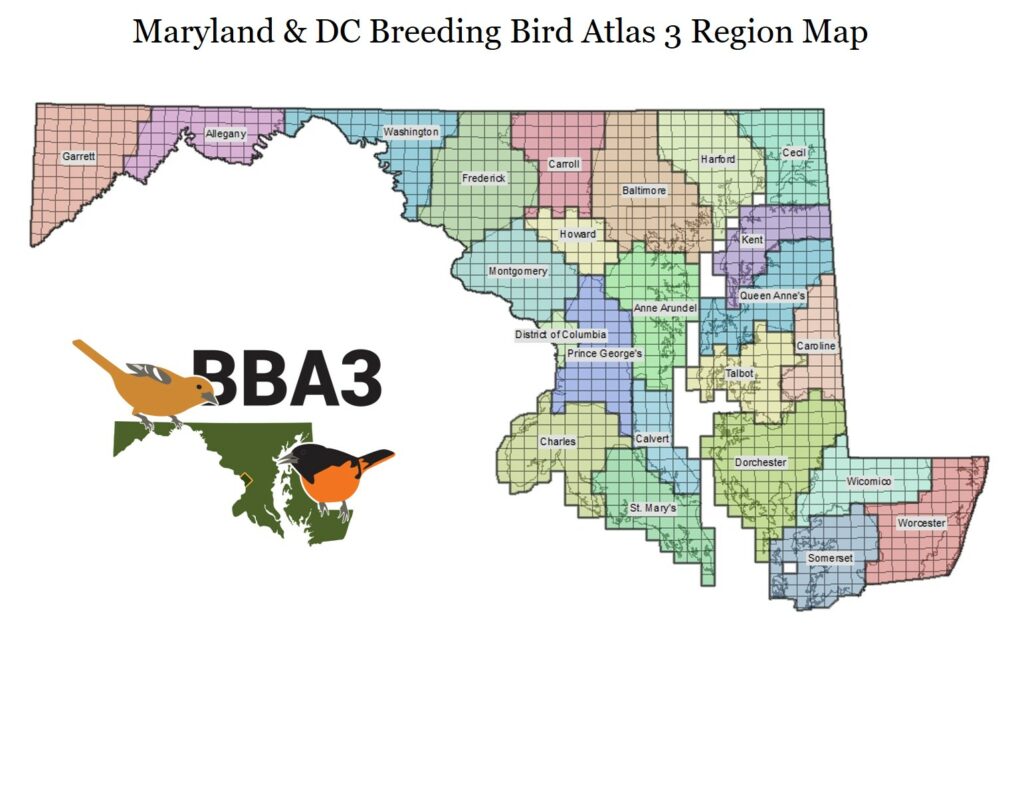 To ensure uniform coverage across the whole region, each block must meet a set of targets by the end of the Atlas. Each block needs to have 20 hours of atlasing effort, at least one hour of nocturnal effort, at least 70 species in rural areas or 40 species in either urban and agricultural areas, or blocks that are mostly water. Each block must have no more than 25% Possible codes and at least 25% Confirmed codes. Finally, there should be checklists in all habitats and all seasons.

Anyone can atlas any block at any time, but to help ensure each block throughout the region meets its coverage targets, atlasers can sign up as the primary atlaser for a block. Signing up for a block doesn’t mean you are the only person who will atlas that block; instead, it means that you agree to be responsible for ensuring that block will meet its coverage targets by the end of the Atlas. To sign up for a block, contact the appropriate County Coordinator.

We used the centermost point of each block to determine which blocks were assigned to each county. Each block was assigned to whichever county that point was located in.  This resulted in a slightly different block distribution for each county compared to the previous atlas. Additionally, more blocks have been included in this atlas; virtually every block that has land in it has been included in the atlasing effort for BBA3.

Use the block tool to search for a block near you, download block maps, and identify block names for your eBird checklists.

When you click on the link to the Atlaser Block Tool below, it opens a program called ArcGIS Online. This internet-based web application was designed to show atlasers the BBA3 block grid over various types of base map layers, as well as the blocks that have been adopted by primary atlasers. When you zoom in to an area (using the + / – buttons in the upper right or the wheel on your mouse) and click on a block, you will also be shown a link that will allow you to download a pdf map of that block. The website also allows for bookmarks, measuring distances, and determining latitude and longitude coordinates. Click on the various icons in the upper right of the screen for various mapping tools.