Looking to give your summer birding a bigger purpose? Birders are asked to hit the north woods this summer in search of one of the state’s rarest and most highly sought breeding species, the Connecticut Warbler. Read on to find out how you can help.

The Connecticut Warbler breeds primarily in the boreal forest of northern Minnesota and Canada, with smaller numbers here in Wisconsin. Populations have declined by 60-70% since 1966 in most areas, leading various conservation groups to designate them a conservation priority. In Wisconsin, they are a Species of Greatest Conservation Need and may be considered for state Endangered or Threatened status by 2025, in part due to steep declines observed in the recently completed Wisconsin Breeding Bird Atlas. 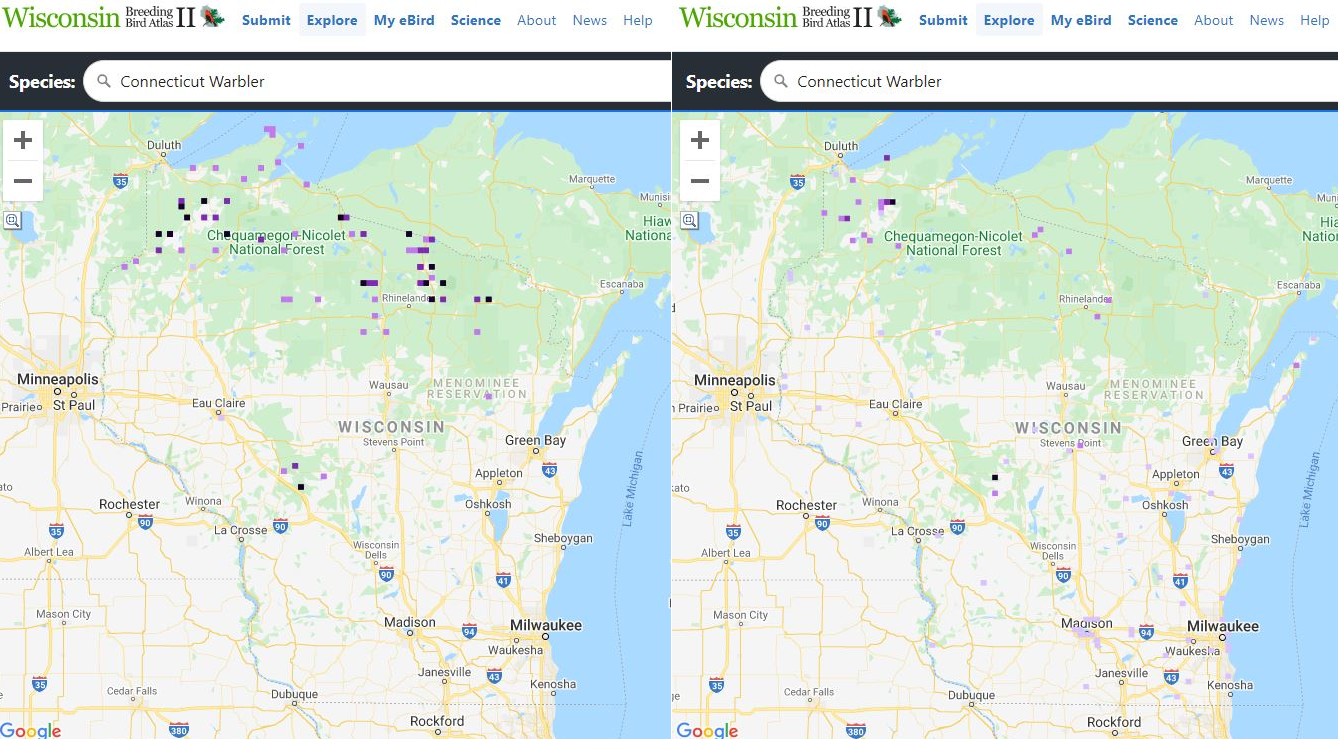 To help fill gaps in survey coverage and paint the best picture of the Connecticut Warbler’s breeding status in the state, Wisconsin DNR is conducting targeted surveys in summer 2021 in areas of historical occurrence and high-quality habitat across north-central and northwestern Wisconsin. Birders can help by visiting Connecticut Warbler breeding habitat from June 10 to July 20 and reporting any observations of this species to eBird, along with appropriate photo or audio documentation.

DETAILS ON HOW TO HELP

What part of the state should I look in?
Visit counties with breeding season records during one or both atlases, as shown in the maps above or viewed here. Most effort should occur in the far north, although Jackson County and vicinity also deserves some attention. Note: New observations are NOT needed from locations with known sightings from the past three years.

What habitat should I focus on?
The target habitat in much of northern Wisconsin is black spruce swamp with large/mature trees, open mid-story, and well-developed ground layer. In the pine barrens of northwestern Wisconsin and Jackson County, focus on mature stands (>25 years old) of jack pine with dense overstory, open mid-story, and well-developed ground layer. Connecticut Warblers occasionally occur near mature red pine or mixed red pine – jack pine stands in these areas.

When should I visit?
Breeding season observations are desired so visits should focus on June and July. Because Connecticut Warblers are notoriously late migrants in spring and adults may depart south by late July, the recommended survey period is June 10 to July 20. The best chance of detection is June 10 to July 1 when males are most actively singing.

Are there survey protocols I need to follow?
For the most part, no, these are casual surveys simply aimed at finding Connecticut Warblers. You may bushwhack into a remote bog, walk a forest road, or even drive slowly along a road through suitable habitat, stopping periodically to spend several minutes listening. Territorial males tend to be loud, frequent singers (sometimes from high in tree tops) so hearing one is much more likely than seeing one. As such, mornings from first light to about 9:00 am are often best. Avoid rain or windy days that make detecting birds difficult. Use of audio playback (i.e. playing bird songs from your phone or other device) is not recommended.

However, if you detect one or more Connecticut Warblers, please do the following:

1. Use your phone, camera, or other device to photograph the bird or record its song. This is important documentation because this species is often misidentified.
2. Record the latitude-longitude of the bird’s approximate location as determined by GPS or aerial imagery (e.g. Google maps).
3. Record a brief description of the habitat where the bird was detected, to the best of your abilities. Try to include dominant tree species present, an estimate of tree density (high, med, low), and average diameter of canopy trees. 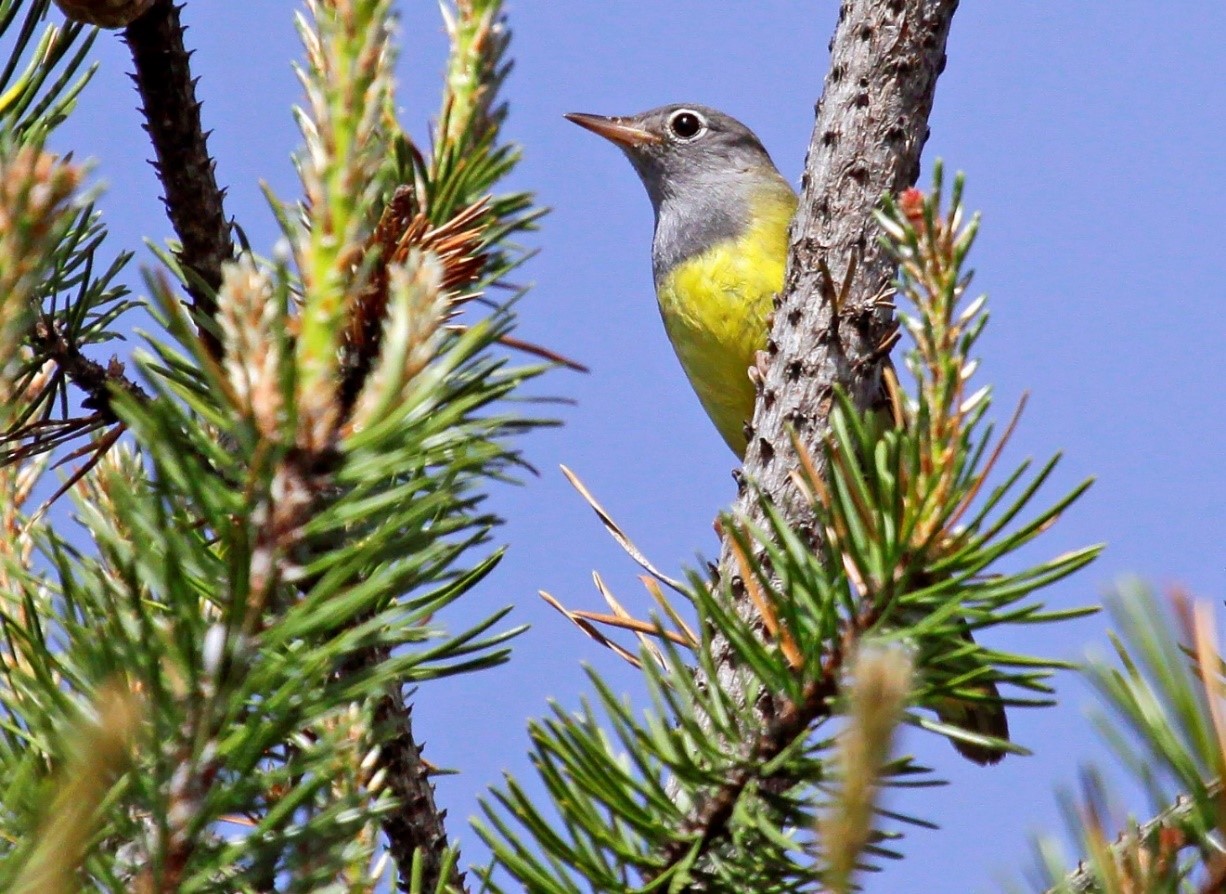 How do I report my results?
All results should be reported via eBird. Use the Stationary or Traveling Count option, being sure to avoid long (> 5mi) traveling counts. If you don’t find any Connecticut Warblers, then you will just be reporting all the other birds you found. If you do find one or more Connecticut Warblers, please record the location and habitat info in the species comments field and provide your media documentation using the Add Media button after submitting the checklist.

If you have any questions regarding this effort, please contact Ryan Brady at ryan.brady@wisconsin.gov. Otherwise, thank you for your help and best of luck finding the fantastic Connecticut Warbler!