Fire is inherent to the American west and natural fires have played an important role in shaping our western forests. The benefits and impacts of fire are usually framed around risk to humans, but many wildlife populations depend on the resulting changes in the landscape. In the western United States, hummingbirds are among the animals affected by the fire landscape–naturally occurring wildfires can be beneficial, enhancing habitat conditions that are important to hummingbirds. The interplay between hummingbirds and fire results from the ebb and flow of maturing and regenerating habitats and highlights the intriguing relationship our smallest of birds have with an imposing natural event. More information about the relationship between hummingbirds, fire, and habitat restoration has been summarized by the U.S. Forest Service and Western Hummingbird Partnership in Effects of Fire and Restoration on Habitats and Populations of Western Hummingbirds: A Literature Review.

The Western Hummingbird Partnership strives to identify the needs of western migratory hummingbirds and to identify gaps in our knowledge, so that land managers can incorporate specific conservation actions for hummingbirds into restoration and revegetation on a large scale. While we know that hummingbirds depend on the nectar that flowering plants provide, we have few data on floral nectar preferences, on the intersections of plant and hummingbird phenologies, and on the influence of fire on hummingbirds. 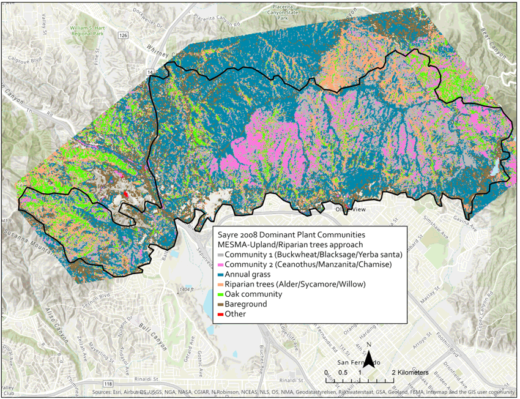 Two studies are helping us fill these knowledge gaps. In California’s Angeles National Forest, a unique team comprised of NASA’s Jet Propulsion Lab, Environment for the Americas, Los Angeles Audubon, Cal-Poly Pomona, and the Western Hummingbird Partnership combined on-the-ground bird and habitat surveys with remote sensing of the forest’s vegetation to examine changes in habitat over a decade after fire swept through, burning over 11,000 acres and destroying more than 600 structures. The results of the project tell the story of self-regeneration in one of the driest, most fire-prone areas in the United States. The study shows how hummingbirds use the landscape and the plant communities they frequent, depending largely on Black Sage and Yerba Santa flowers. These plants are fire resilient and among the earliest to regenerate after fire. A decade after the fire, these have self-restored, covering more of the area than before the fire. These details offer lessons for land managers who need to inform decisions about restoration priorities after a fire in chaparral habitats. 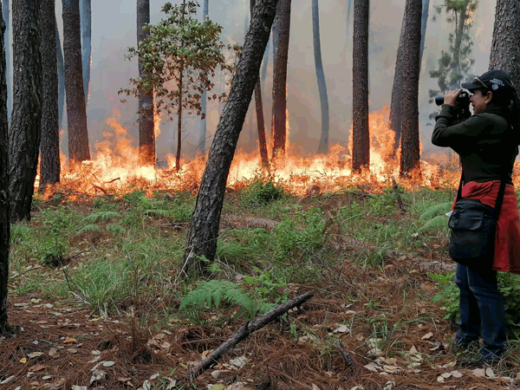 Over 1,600 miles to the south, in the Sierra de Manantlán Biosphere Reserve, Dr. Sarahy Contreras and her team at the University of Guadalajara-CUCSUR have formed an equally unique partnership with the Reserve, an ejido, and the Reserve’s gateway community in Ahuacapán, Mexico to study hummingbirds and fire from a different angle. Migratory hummingbirds on their wintering sites in Mexico are challenged by the loss of traditional fires that provided forest openings and the floral nectar resources they need. Changes in fire regime are resetting the timing of fire practices earlier, removing resources as migratory hummingbirds arrive. Contreras organized prescribed burns to create the forest openings that support the flowering plants migratory hummingbirds need.

These two projects are developing practical solutions for hummingbird conservation on their breeding, migratory, and non-breeding sites. In Mexico, the project will result in a manual for the use of hummingbird conservation through fire. In California, the information is already being used to recommend a new technique for tracking the regeneration of vegetation communities after fire and the plant communities hummingbirds need.