An expedition team in Venezuela, led by ornithologist David Ascanio and supported by American Bird Conservancy (ABC), rediscovered the Urich’s Tyrannulet last month. The tyrannulet was first described in 1899, but it has only been spotted two other times; once in the 1940s and again in 2005. With so few records, the Urich’s Tyrannulet is one of the most poorly known birds in South America, and with its cloud forest habitat being cleared for agriculture, scientists fear this endemic species could soon be at risk of extinction.

The expedition team proved that the Urich’s Tyrannulet still occurs in Venezuela by capturing the first clear photos and the first-ever recording of its call—shedding light on its behavior and ecology.

“It’s like a little tiny Shrek,” says Ascanio of the olive-green bird, which is similar in color to the popular movie character. “It’s not as striking as many of the other birds in the same forest, and it has a shrill call, but if it’s there it means that the forest is healthy. It’s aligned with the presence of all these other wonderful forest birds and other species. I was shaking with excitement when we first saw it!”

“Urich’s Tyrannulet was one of only sixteen species of birds in all of South America that no one had reported in eBird in the past 10 years, so it immediately stood out to us as one of the most poorly known birds on the continent,” says John C. Mittermeier, Director of Threatened Species Outreach at ABC. “Considering that it is also endangered and that much of the habitat in its small range has disappeared since it was last seen, trying to find the tyrannulet and confirm that it had not gone extinct was an important conservation priority for us.” 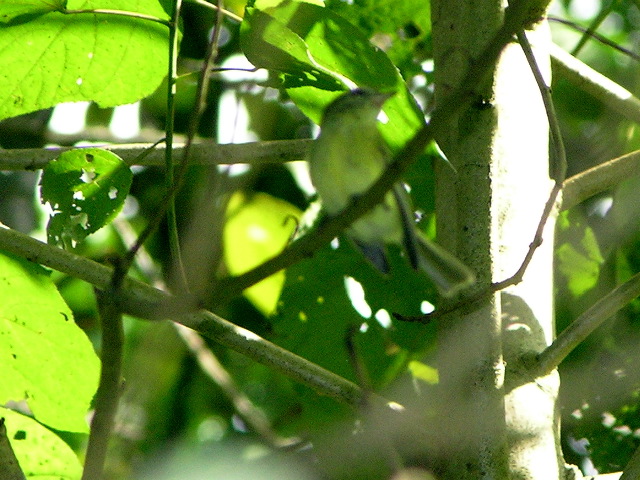 Thanks to Ascanio and his team’s discovery, some aspects of the Urich’s Tyrannulet’s behavior and habitat have been brought to life. Ascanio and his team have archived their photos and audio recordings in Cornell Lab of Ornithology’s Macaulay Library where they are publicly available for research and conservation efforts. Along with the new findings on where this bird lives, this information can help conservation groups begin taking steps needed to protect it.

The expedition team originally hoped to revisit the location where the last confirmed Urich’s Tyrannulet sighting had been made in 2005 by Ascanio and Mark Sokol, a music professor and fellow birdwatcher. But in the years since the sighting, the forest where Ascanio and Sokol had seen the species had been almost completely clear-cut and converted to grassland.

Forced to find a new location for the bird, the team used satellite images and suggestions from local people to identify two sites that seemed potentially promising. They also received a lead on a third site from an unexpected source: Ascanio was scrolling through Instagram when he noticed a photo of a thickly forested mountainside alleged to have been taken near Yucucual in the state of Monagas, not far from a location where a specimen of Urich’s Tyrannulet had been collected in 1943.  He contacted the photographer, Carlos Matheus, and after hearing a bit more about the forest, Ascanio decided to add the location to their tyrannulet search.

When the team members arrived in the mountains, they found to their dismay that one of the three sites had already been heavily degraded, with many of the forest-dwelling birds gone. At another, it rained so hard that it was impossible to search for birds. In the area around Yucucual, however, they found a beautifully forested hillside, just as in the Instagram photo. And, with luck, the weather was perfectly clear.

Even in this beautiful forest, however, finding the first Urich’s Tyrannulets in over a decade was no easy task. The team searched for 10 hours before, suddenly and much to their delight, a pair of the small greenish-olive birds swooped down and perched on a branch in the lower part of the canopy. The next morning, the team was able to find a second pair and record their calls for the first time.

Hope for the future

With so much of the forest in the area gone, Yucucual-Mata de Mango may be one of the only places left where the Urich’s Tyrannulet still survives. Ascanio hopes that with the help of the local community, this forest will become a destination for birders and ecotourists, and that the habitat, the tyrannulet, and the many other unique species living there will be protected for years to come.