Worldwide, the cost of bird collisions with planes has been estimated at $1.2 billion per year. Information on bird movements throughout the year can help avoid damage to aircraft and risk to passengers. Scientists from the Cornell Lab of Ornithology and partners have been looking for patterns in bird strike data from three New York City area airports. Their findings were recently published in the Journal of Applied Ecology.

“Out of all the bird strikes recorded at Kennedy, Newark, and LaGuardia airports during a six-year period, the highest number occurred during migration, especially during the fall, perhaps due to many inexperienced young birds born earlier in the year,” explains lead author Cecilia Nilsson. “Ninety percent of the strikes involved a migratory species. Our model predicts that the risk for damaging strikes during periods with very high migration intensity increases by as much as 400% to 700%.” Nilsson led this study as a Rose Postdoctoral Fellow at the Cornell Lab, and is now at the University of Copenhagen in Denmark. 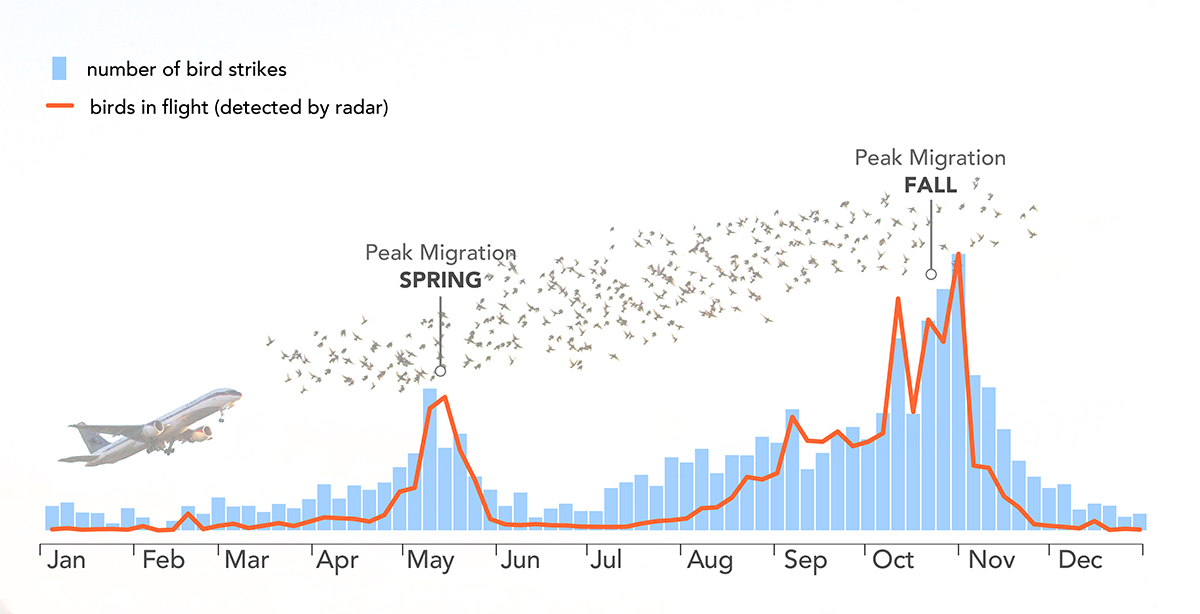 Graph shows the number of bird strikes per aircraft movement (blue bars) and level of bird movement (red line), averaged for each five-day period for the years 2013 to 2018 and combined for three New York City commercial airports. Both spike during migration, especially in the fall. Graphic by Jillian Ditner, Cornell Lab of Ornithology.

Study authors used weather surveillance radar from two nearby stations to learn when migration was the most intense at the airports studied. Data from eBird helped define which species occurred near the airports throughout the year. A third source of information came from an invaluable dataset of detailed bird-strike records kept by the Port Authority of New York and New Jersey, which operates the three airports. Species that most often caused damage were assigned a hazard score.

“The damage caused by a bird strike very much depends on the weight of the bird struck and the tendency of that species to move in flocks,” says Nilsson. “When large bodied birds are moving through, the risk for damaging strikes is the highest.”

Species with high hazard scores include Canada Geese, Great Blue Herons, Mallards, and Turkey Vultures—with Canada Goose being the species most likely to cause damage. The greatest number of bird strikes at the three airports involved a familiar medium sized songbird, the American Robin.

Commercial aircraft are most vulnerable to bird strikes during takeoff and landing where birds and planes share the airspace; military aircraft are also at risk at the lower altitudes, because they fly low and fast during training exercises. At cruising altitudes aircraft are generally too high to encounter most flying birds.

“It’s important to realize that the timing and species composition of bird movements will differ for each location,” Nilsson points out. “But both the eBird data and the radar data are continental datasets so the method used in our study can be applied to other airports to save time, money, and possibly lives.”

The use of material in this story is protected by copyright. Use is permitted only within stories about the content of this release. Redistribution or any other use is prohibited without express written permission of the Cornell Lab of Ornithology or the copyright owner.