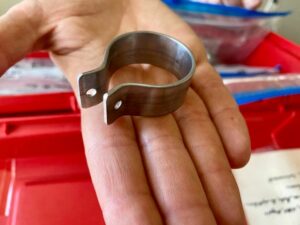 At any given time, there are many different patients at Montana Fish, Wildlife and Park’s Wildlife Rehabilitation Center in Helena, Montana. But these aren’t your average patients. These patients have beaks, feathers, and wings! The Center takes in injured and orphaned birds from around the state of Montana, patches them up, and then releases them back into the wild. Today Ali Pons, who runs the wildlife center, is doing a check up on a Northern Goshawk that will soon be released. She is testing wing mobility, making sure the bird is at a healthy weight, and also placing a small band around its leg with a unique identification number on it.

“The Montana Wildlife Rehabilitation Center began banding all releasable rehabilitation birds this past year to obtain data on the success of the birds after they leave the Center,” says Ali. She says the only reason that they wouldn’t band a bird before release is if they did not have a band the appropriate size for the bird or they weren’t authorized to band that species of bird. Keeping track of how released birds are doing is not the only benefit of banding the rehab birds. Once back in the wild, those unique bands can be spotted and reported by birders and scientists and entered into a data system! 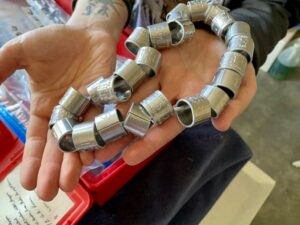 Banding birds is a practice that has been around for many years and is one of the first ways that scientists began studying animal migrations. Scientists band birds of all sizes, from hummingbirds to swans! The U.S. Geological Survey manages the Bird Banding Laboratory and all of the data that tracking banded birds provides. According to the U.S. Fish and Wildlife Service, “Information from bands subsequently found and reported to the Lab provides data on the distribution and movements of species, their relative numbers, annual production, life span, and causes of death. Such information increases our knowledge and understanding of birds and their habits and assists us in their management and conservation.” (“USFWS – What is the Bird Banding Program?” 2018)

So what does it take to band a bird at the Wildlife Rehabilitation Center? Well, it can look a little different depending on what species you are working with. Most birds are hooded, which means a small leather hood is placed over their head. “Hoods are used to keep the bird calm by eliminating visual stimulus”, Ali explains. Once the bird is calm, a tool is used (photo 1) to measure the bird’s leg and find a band size that will be safe and comfortable for the bird.

There are several different types of bands that the center uses. The “Butt End” band (photo 2) is used for birds with smaller legs such as loons, American Kestrels, and Great Blue Herons. A Locking Band (photo 3) is used for slightly larger birds like Red Tail Hawks, and Great Horned Owls. The third kind of band is the Rivet Band (photo 1). These are used for Golden and Bald Eagles! 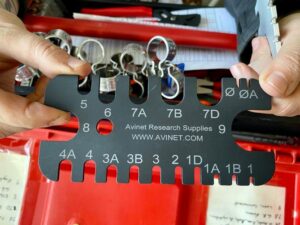 It takes a lot of practice to safely and effectively put a band on a bird. It has to fit just right and Ali emphasizes, “You have to make sure that there is nothing on the band that will poke into the leg or get caught in something and injures the bird”. Once these birds are banded and the staff at the Wildlife Center has determined that they are strong and healthy enough to survive in the wild, they are released! These birds are now wild, and free, and contributing to science! (Photo of the previously mentioned Northern Goshawk being released!)

You can contribute to science by reporting any banded birds that you spot to the USGS Bird Banding Lab at reportband.gov.

“USFWS – What Is the Bird Banding Program?”Official Web Page of the U S Fish and