Fire season is tough in Montana. Wildfires threaten human lives and wreak devastation on property. Smoke generated from severe fires can affect air quality and overall quality of life hundreds of miles away. As we approach fire season, we thought it was worth reviewing what comes in the years following a severe burn. There is a certain magic that happens after an impenetrable wall of fire moves through. The year following a fire, one can picture a forest floor now carpeted in wildflowers and morel mushrooms; the brilliant blue flash of Mountain Bluebirds hovering above them, searching for insects in beams of late-afternoon light; Calliope Hummingbirds zipping through fields of fireweed; and the commanding “Quick, three beers!” from a singing Olive-sided Flycatcher atop a charred snag. 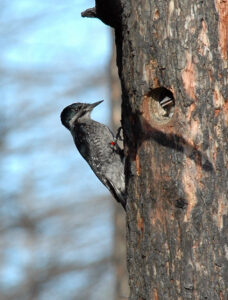 Scenes like these are common in recently burned forests. Research over the last three decades by the University of Montana scientists suggests severe fires are a natural and inevitable part of our forest ecosystems. Furthermore, a distinct community of plants and animals have evolved to depend upon the environments created by fire. Some birds, like the Black-backed Woodpecker, would hardly be found in Montana at all without severe fires. Bicknell’s Geranium seeds can lay dormant in the soil for more than a century, waiting for a fire to remove their competitors from the forest floor before germinating. For the University of Montana Professor Emeritus Dick Hutto, the very existence of these organisms speaks to the essential role of a severe fire in the environmental history of western forests.

Hutto first noticed the unique biological communities ignited by severe burns following the notorious fires in Yellowstone National Park in 1988. After surveying birds in the years following that fire, he identified 15 species that were more abundant in recently burned conifer forests than in any other vegetation type or condition in the northern Rockies. Hutto continued surveying birds throughout the northern Rockies. After surveying more than 16,000 locations between 1988-2003, he found that “data from across every vegetation type in the northern Rockies show that burned forests are occupied by some species to the near exclusion of other vegetation types.” These included the Black-backed Woodpecker, American Three-toed Woodpecker, Mountain Bluebird, and Tree Swallow.

The vast majority (96%) of Black-backed Woodpeckers were detected in burned forest conditions, where they feed on the larvae of wood-boring beetles drawn to the burnt, defenseless trees. Hutto asks, “if you don’t have severely burned forests, where will viable populations of these species exist?” But woodpeckers are just one part of the rich ecological community that thrives in burned conditions.

Recently burned forests are home to a variety of organisms specially adapted to their habitat’s unique, ephemeral conditions. They are a caravan of biological rarity, setting up shop wherever fires occur. Hutto lists a series of unique adaptations that organisms use to thrive in these unpredictable, temporary patches of habitat, “…everything from a jewel beetle’s ability to find and use the wood in recently killed trees, to the woodpecker’s black back that perfectly matches the burned trees they feed on, to the seed coat hardness in, say, Ceanothus shrubs which requires intense heat to germinate, to the cones of many conifer tree species that are serotinous and require intense heat to open.”  To Hutto, these special adaptations are no accident. They are the result of evolutionary pressure over millions of years, shaping these plants and animals to thrive in this specialized ecosystem.

At a time with an increased focus on fire suppression and timber harvesting techniques designed to reduce fire severity, Hutto argues this rich biological heritage must not be forgotten. He believes it’s a mistake to characterize western forests as historically devoid of severe fire. In a 2008 paper in Ecological Applications, he argues “…life-history adaptations of organisms are underused as sources of reliable information in the debate about what constitutes ‘natural’ forest conditions and fire regimes.”  The overwhelming reliance of Black-backed Woodpeckers in the northern Rockies on burned conditions suggests that Black-backed Woodpeckers have long occupied these habitats. Their adaptations, shaped over evolutionary time, tell their own story about a forest’s past. They speak to conditions more ancient than any living tree’s burn rings can tell us about historic fire regimes in these forests. 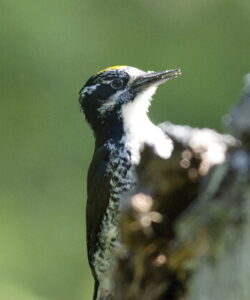 Eliminating all severe fires would lower the biodiversity of forests, says Hutto. In order to mimic natural conditions, fires that pose no threat of immediate harm should be allowed to burn. The mosaic of habitats created by the patchwork forest –all at different stages of post-fire succession and severity – could result in a forest more closely resembling its historic appearance, a key goal of restoration. Even more critically, salvage logging (the practice of removing trees in recently burned forests) removes a key resource a specialized suite of organisms rely on. Many forest managers would argue that a very small proportion of trees are taken out of any burned landscape, but often times, the places that are the best for birds and other wildlife are the very places that are selected for salvage logging. Hutto encourages birders and other nature enthusiasts that enjoy these unique places to “get active about opposing proposals to salvage log the most unique and ecologically valuable vegetation condition on the landscape.”

Many stakeholders have a seat at the table when it comes to managing forest fire. Human safety, forest economics, forest fuel loads, fire crews, and wildlife conservation must all be accounted for. It is a crowded and sometimes messy table, but it’s important to keep them all in mind when managing forests. We still have a lot to learn about wildfire management and the way it changes landscapes. But for the birds, a forest fire is a restorative and vital part of life.

Written by Mike Krzywicki. Follow UMBEL on Facebook and Instagram to learn more about birds and ongoing research conducted at the University of Montana. If you have any questions about his research please contact Dick Hutto at hutto@mso.umt.edu.