Have you ever wondered about the chirp, buzz, drum, or squawk you hear while walking in nature? Have you wondered if those sounds have meaning embedded in them? While those sounds may not sound like much to us, the animal communication network has been evolved over millions of years and each sound conveys a specific message. Bird vocalizations can be territorial, between mates, or to warn about impending danger.

For over a decade, researchers at The University of Montana have investigated how these “distant early warning” systems work.  Their results have shed light on these amazing shared communication networks: the alarm calls of animals can “encode” detailed information on the threat levels posed by a predator; they specify they type of threat (e.g. flying raptor, perched raptor, snake on the ground, etc.); and many mammals and birds all listen to and understand each other’s messages. 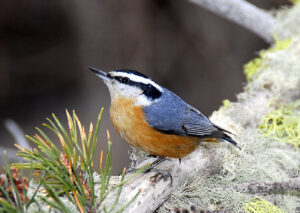 A new study from these researchers at the University of Montana has focused on how Red-breasted nuthatches treat direct, verified information about a predator, versus indirect, unverified information about a predator from listening to the alarm calls of others.  The study took advantage of the fact that nuthatches eavesdrop on the calls of chickadees and communicate messages to nearby birds, not unlike a “retweet” on social media. How birds respond to alarm calls – and relay the message to others – can quite literally mean the difference between life and death. Researchers experimented with different types of threats to nuthatches, including Great Horned Owl (a lesser threat since they tend to target larger prey) and Northern Pygmy-Owl (a highly dangerous threat to songbirds). Their research also took into account whether messages from their own species were more important than those from chickadees.

top scientific journals in the world.  The story was also picked up by National Geographic. 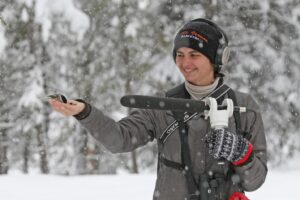 It is also interesting that the research is entirely a “Montana product” that resulted from a collaboration between three academic generations of researchers at University of Montana.  Professor Erick Greene, is the “academic grandfather”; Nora Carlson, a former undergraduate student in UM’s Wildlife Biology program, is the “academic granddaughter”;  Nora went on to do her PhD with Chris Templeton at University of St. Andrew’s in Scotland.  Chris was a graduate student with Erick Greene, and so he is the “academic son.” Nora Carlson is the first author on the study, and it grew out of her undergraduate senior project.

To see some amazing video of the original “social network”in action, check out story that aired on KPAX news.