Each year countless birds migrate between the Americas, making an arduous round-trip journey from breeding grounds in the north to wintering habitat in the south.  Bird enthusiasts are familiar with the colorful maps that depict the extent of each bird species range, but until recently, technological limitations have hindered our understanding of how birds travel from one end of the Americas to the other. Recent advancements in tracking technologies are rapidly filling in the gaps. 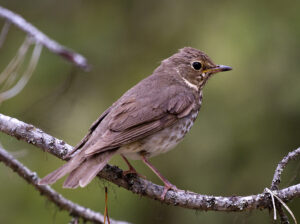 A few months ago we shared a story about new research tracking the movements of Swainson’s Thrushes that breed in British Columbia and migrate through Montana’s Bitterroot Valley using Motus, a network of automated radio telemetry receiving towers that track the movement and behavior of flying animals. Thirteen Swainson’s Thrushes were banded and tagged with small transmitters by Joely DeSimone from the Breuner Lab at the University of Montana, and Maggie Blake from the University of Montana Bird Ecology Lab, both part of a team studying migration physiology at MPG Ranch, a conservation property in the Bitterroot Valley.

Motus is a new approach and still under development, with hundreds of established receivers already functional, and dozens more planned in the next year. This network helps fill in critical links about natural history. For example, we can fill in critical links like overwintering locations, migration routes, and how birds use the landscape as they migrate. Yet, many more towers are needed to achieve full coverage. So, it was with some surprise that researchers recently learned about a Swainson’s Thrush they tagged in the Bitterroot Valley of Montana was found in northern Colombia last fall. The bird was tagged on August 30, 2019, and was detected passing by a tracking tower near Colombia’s Caribbean Coast on October 9th—traveling over 3,000 miles in 40 days!

Ornithologists began marking birds in a systematic fashion to study migration in the late 19th century. For most of the 20th century, small aluminum bands placed on bird’s legs were the primary tools for studying the movement of songbirds. If scientists in another location captured the bird, there was evidence of individual migration. Yet the odds of recapturing a bird at the modest number of bird banding stations scattered throughout the Americas is very low, and even when it occurs, little can be discerned about the bird’s movements between the two captures. “We can only learn so much from banding alone,” notes Megan Fylling, an Avian Ecologist at the University of Montana Bird Ecology Lab working on the Swainson’s Thrush project. But scientists had few other options. Satellite and radio tracking systems developed to study the movements of other animals in the late 20th century were too large for songbirds.

A biologist’s first priority is the safety of their study animal, and tracking devices used to study raptors and other large birds like Argos Tags are too heavy for small birds to wear without impeding their flight. “We won’t put anything on a bird that exceeds 3% of its body weight” reports Fylling. Swainson’s Thrushes typically weigh only 30-35 grams, meaning transmitters should not be more than one gram. For a long time, this threshold limited what scientists could learn about the migratory movement of songbirds. 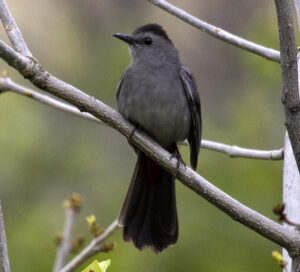 In the last decade, new data-logging devices weighing as little as 0.35 grams were developed. Smaller than a thumb-nail with a short antenna unobtrusively sticking off the back of the bird, these tracking devices allowed scientists to track the movement of small birds for the first time throughout their entire migratory journey. Yet retrieving the data still required re-capturing the same bird.  Fylling used these tags, as well as tiny programmable GPS units, in a previous study of the overwintering behavior of Gray Catbirds in the Bitterroot Valley from 2012-2018.

Over several winters Fylling learned a lot about the migratory movements and wintering ranges of multiple Catbirds, and the paper resulting from this effort is currently in review for publication. “The biggest limitation for us was the expense of each unit and the challenge of finding and re-capturing birds the following breeding season,” said Fylling.

The new Motus network of towers used in the Swainson’s Thrush study has the potential to improve our understanding of where individual birds are migrating without the expense and effort of recapturing them. The network is made up of hundreds of towers laid out in an array, and when results from many receivers are combined, it can help scientists track animals across a broad scale. If all goes according to plan, Fylling can expect to pick up detections from tagged birds flying past towers to and from their breeding grounds for up to 2 years. “In just the last ten years, the technology for tracking small animals has improved by leaps and bounds. We have seen units get smaller, cheaper, and more precise. What we thought wasn’t possible just a few years ago is becoming widely used by biologists. Even more astounding is that we can get the data from the birds without even recapturing them” said Fylling. Echoing Fylling, PhD student Joely DeSimone sees a benefit in not having to catch a bird again to track its movements: “Motus makes it easier to study birds outside of the breeding season, such as birds at stopover sites during migration, or birds that have unpredictable movements such as Pine Siskins.” 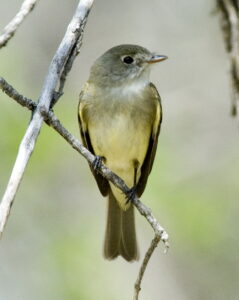 The detection of a Swainson’s Thrush at La Finca de Las Palermas in Cordoba, Colombia, highlights the benefit of this new tool. The antennae that picked up the Swainson’s Thrush was installed for a study by SELVA, a Colombian conservation non-profit researching migratory birds’ use of lowland tropical dry forests in Caribbean Colombia. Their primary goal using Motus was to track the stopover behavior of several species of interest, including Montana breeding birds like Yellow-billed Cuckoo, Willow Flycatcher, and Alder Flycatcher. Swainson’s Thrush is not a common species at Las Fincas. According to Camila Gomez, a researcher at SELVA, the Swainson’s Thrushes are likely headed for “the montane forests further south” to spend the winter. However, this detection highlights how little we know about the exact movement of birds throughout their migratory lifecycle, as well as the benefits of a tracking infrastructure that makes collaboration between researchers easy. An antenna setup for one research goal can also aid other scientists.

Like SELVA, PhD student Joely DeSimone wants to learn more about the way birds use stopover sites during migration. “This is just one bird, so we can’t draw any conclusions from this one data point”, said DeSimone. “But I am interested in how conditions during stopover affect a bird’s migration, so if we get more detections like this, we’ll be able to see if a bird’s experience [in the Bitterroot Valley] — how much it eats, how much fuel it stores, and how quickly it can prepare for flight — affects its overall migration speed”. In fact, DeSimone has already been able to calculate migration speed for several Gray Catbirds with Motus tags moving through the Gulf Coast, an impossibility a decade ago. Learning about how and where birds use habitat is crucial for developing strategies to conserve birds whose complex lives unfold at a trans-continental scale. For scientists like DeSimone and Fylling, more answers simply beget more questions.

*Written by Mike Krzywicki. Follow UMBEL on facebook to learn more about birds and ongoing research conducted at the University of Montana. If you have any questions about these research studies, please contact Megan Fylling at megan.fylling@mso.umt.edu or Joely DeSimone at joely.desimone@umconnect.umt.edu .