Do birds that breed in the same area share the same wintering areas? Do they use the same migratory routes? What are the conservation implications for species with distinct populations that have different migratory habits? Knowledge of migratory connectivity (geographically linking the life cycle in migratory species) has been difficult for songbirds. Traditional methods for tracking bird movements, such as bird banding and recovery, yield relatively few results. Researchers from the University of Montana are using Motus transmitters, an exciting new technology, to learn more about the habits of Swainson’s Thrushes passing through MPG Ranch in the Bitterroot Valley on their spring migration north. 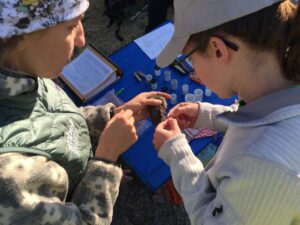 Swainson’s Thrushes breed throughout much of North America’s boreal and montane forests. Although they are somewhat drab and secretive, their spiraling, ethereal song is a favorite among birders. Unfortunately, their numbers are declining throughout their range, though no one knows exactly why. The thrushes are true long-distance migrants and many have studied the behavior and systematics of the species. According to Megan Fylling at the University of Montana Bird Ecology Lab, “there are two major subspecies groups of Swainson’s Thrush. One group is Pacific coastal, and the other group is everywhere else.” Breeding Pacific Coast thrushes migrate south along the west coast of North America to spend the winter in southern Mexico and Central America.

The inland thrushes breeding in North America work their way to the southeast United States, where they cross the Gulf of Mexico to winter in Venezuela and Colombia. Scientists think these populations were separated sometime during the Pleistocene ice age, which leads to distinct genetic and phenotypic (observable) traits. They suspect that the migratory routes of the two different populations of Swainson’s Thrushes during migration reflect their pattern of expansion at the end of the Pleistocene. Ongoing research by Dr. Kira Delmore in British Columbia supports this idea. British Columbia has both coastal and inland breeding populations of Swainson’s Thrush. Despite being closer to the Pacific Coast than the Gulf of Mexico, inland breeders in BC cross the Northern Rockies and the central US in order to cross the Gulf of Mexico, just like Swainson’s Thrush that breed in Manitoba or Maine. But how do scientists track these movements?

Motus is a network of automated radio telemetry receivers that tracks the movement and behavior of flying animals. Motus receivers are deployed as an array throughout areas of interest, and that network has gained a lot of momentum recently, spreading across several continents with a stronghold in North America. It is a novel and promising tool for tracking movements in birds and bats. The animals wear tiny transmitters that emit a uniquely coded radio frequency that is detected by Motus receivers when they fly past. Historically, tracking technology for small birds was limited by the size of units that could be safely put on a songbird without compromising their ability to fly. Even sophisticated tools like GPS tracking devices were limited because the units were unable to remotely send information to researchers. In other words, a scientist had to catch a bird again after the initial capture to retrieve the information. 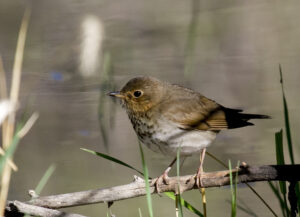 Motus is also highly collaborative. Antennas pick up signals from any tag on the Motus frequency, regardless of what scientists deployed the unit. For example, Fylling and her collaborators were inspired to put tags on Swainson’s Thrushes this spring after a receiver on MPG Ranch detected several thrushes from Delmore’s team in British Columbia. Fylling wants to know if the Swainson’s Thrushes that migrate through western Montana during spring migration will fly to British Columbia, or perhaps another breeding location. She hopes this pilot season will contribute to our understanding of migratory connectivity in Swainson’s Thrushes. Like any migratory bird, understanding how the different pieces of this species’ life history fit together is essential for developing conservation strategies to protect them.

*Follow UMBEL on Facebook to learn more about birds and ongoing research conducted at the University of Montana. If you have any questions about her research, please contact Megan Fylling at megan.fylling@mso.umt.edu