Millions of birds migrate across North America from their breeding to their wintering grounds each fall. So many birds fill the sky during this migratory period that their movements are detectable by Doppler radar. Counting these mass movements is important for monitoring bird populations. Most species of songbirds migrate at night, when the skies are safer and the weather calmer. Flying under the cover of darkness makes identifying species and counting numbers challenging for ornithologists. Fortunately, many songbirds have distinct calls that they make while migrating. Because they typically make these calls at night, scientists refer these vocalizations as nocturnal flight calls (NFC’s). Microphones and recorders can be deployed remotely to record these NFC’s. Researchers from MPG Ranch, Project Night Flight, and the University of Montana have been working with Five Valleys Audubon and Five Valley’s Land Trust to document NFC’s at a conservation property in the Missoula area. They data they collected contained a wealth of information about migration timing, abundance and species diversity, and what species were using the property for stopover (refueling during migration). 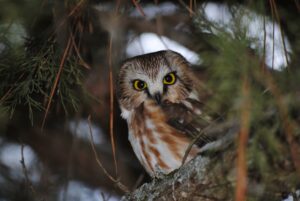 Migrating at night makes a lot of sense for birds. It makes them harder for predators to detect, weather patterns are generally calmer at night, and traveling at night allows them to maximize daylight to search for as much food as possible before continuing on their migratory journeys. However, flying at night makes counting numbers of migratory birds challenging for scientists. Radar images can give estimates of raw abundance, but don’t tell researchers anything about the species detected. They also don’t reveal anything about the where birds are choosing to stop to replenish their energy stores before setting off on the next leg of their journey.

Knowing who is using stopover sites and how they use them is important for conservation. Using acoustic monitoring devices called Autonomous Recording Units (ARU’s), scientists can detect the movement patterns of birds flying at night by documenting their calls. The ARU consists of a microphone attached to a tall pole and a recording unit. It can detect bird calls 600 meters up in the sky within 300 meters of the microphone. Information from these ARU’s can tell scientists about timing of migration, use of stopover habitat, and abundance and species diversity.

Researchers from MPG Ranch and the University of Montana placed an ARU at the Line Ranch in Missoula, on a Conservation Easement secured in collaboration with Five Valley’s Land Trust. In 2018, the ARU recorded Nocturnal Flight Calls each night from late July through late October. Cedar Mathers-Winn, a Biologist and recent graduate in the Master’s program at the University of Montana specializes in the field of Bioacoustics, or the study of animals’ sounds. Mathers-Winn analyzed the many hours of recordings, matching the NFC’s to species or groups of species. The unit recorded around 6,000 individuals belonging to 30 unique species. Sparrows, thrushes, and warblers were the most commonly detected groups of birds. By isolating calls detected near sunrise, researchers were also able to determine what birds were using the conservation easement as a stopover site. They found that about 1,300 birds of 21 species used the Line Ranch as a stopover site.

The ARU detected a variety of other birds that do not make nocturnal flight calls, including hard-to-detect species like Northern Saw-whet Owl. Two Montana species of concern, Lapland Longspur and Veery, were also recorded by the ARU. The majority of Veery detected used the Ranch as a stopover site. Insights like these inform decisions by scientists and land managers looking to conserve critical habitat. The data from the Ranch also shows that critical habitat comes in all shapes and sizes, and that maintaining open space near urban areas can be just as important as large-scale reserves for birds that travel thousands of miles through mixed landscapes during migration.

*Follow UMBEL on facebook to learn more about birds and ongoing research that is being conducted in western Montana. If you have any questions regarding the Bioacoustic research please contact Cedar Mathers-Winn at cedar.mathers-winn@umconnect.umt.edu or Debbie Leick at dleick@mpgranch.com