We often think of nests as safe, cozy spaces. Humans decorating their homes or tucking away under a blanket on a cold rainy day sometimes refer to themselves as ‘nesting’. The reality for birds is often quite different. Nests are stationary objects full of helpless eggs or nestlings, an attractive target for predators. Different species of birds experience different predation rates on their nests. Because nest predation rates have a large impact on the dynamics of bird populations, understanding more about what increases or decreases a species’ risk of predation is important for understanding the evolution of its life history. The difference in the structure of a bird’s nest could be one factor responsible for varying predation rates. 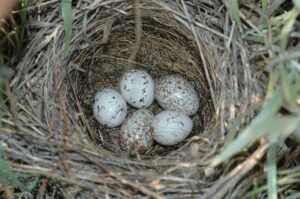 It is commonly accepted that enclosed nests are safer than open cup nests. The reasoning behind this is intuitive. The contents of an enclosed nest, be it eggs or nestlings, are less exposed than the contents of a nest without walls or an enclosed roof. In addition, enclosed nests could muffle the sounds made by nestlings begging for food, also reducing the risk of predation. However, “if enclosed nests are so much safer, why are open cup nests more common among songbirds?” wondered James Mouton, a PhD student in the Martin Lab at the University of Montana. Reviewing the scientific literature, he found that scientists have conducted little rigorous direct testing of the idea that enclosed nests are safer. Mouton tested this concept through a clever combination of observational and experimental data on the breeding breed community in Malaysia’s Kinabalu Park.

A popular park for tourists, the infrastructure and relatively good road system made the park a great tropical study site. Although the vegetation could be challenging, with spiny plants and a razor sharp understory, Mouton described the insects in Kinabalu as “not that bad for the tropics”. Technicians and graduate students at the Martin Lab tracked the success/failure of over 5,000 nests in Kinabalu’s mid-elevation tropical forest over a nine year period. This provided Mouton with a wealth of information about predation rates on nests for different species. The Martin Lab also banded thousands of adult birds over the same timeframe. They measured the mass of each bird captured, obtaining an average body size for many species breeding in the park. Mouton also measured the diameter and height of 1,061 nests. This allowed him to estimate the overall size of different enclosed and open nests. After sifting through the observational data, Mouton devised an experiment to test whether a nest’s structure had an impact on the detectability of the begging call of nestlings. 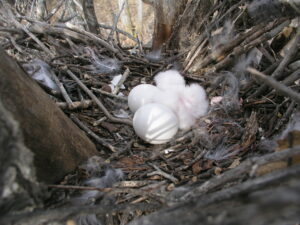 Kinabalu has a diverse array of predators that will eat eggs or nestlings. The two most common predators, the Bornean Green Magpie and Mountain Treeshrew, both rely on auditory and visual cues to hunt. Mouton’s nest measurements gave him an index of how visible a nest might be to predators, but he also wanted to examine whether a nest’s structure impacted the detectability of sounds coming from them. He placed decoy eggs inside recently used but vacant nests of Bornean Whistler and White-browed Shortwing. He then played begging calls from Mountain Wren Babbler from some of each nest type, comparing the predation rates from these nests with nests that had no begging calls. His results defied expectations.

Data collected by the Martin Lab over the last nine years show that birds with larger bodies have a reduced risk of nest predation. However, Mouton found that overall nest size had a greater impact on a nest’s predation risk than whether it was enclosed or open. The larger a bird’s nest was relative to its body size, the more likely it was to be predated. His data show that enclosed nests are larger than open nests for birds of a similar size, so the argument could be made that enclosed nests increase the risk of predation. The results from the nestling begging call also surprised Mouton. Enclosed nests with begging calls had higher predation rates than those that did not, while predators attacked the decoy eggs in open nests at about the same rate as those without begging calls. Mouton suspects that the benefits of an enclosed nest may have more to do with protecting eggs and nestlings from weather than predation than previously recognized. Perhaps there is something to ‘nesting away on a rainy day’ after all.

*Follow UMBEL on facebook to learn more about birds and ongoing research that conducted at the University of Montana. If you have any questions about his research, please contact James Mouton at James@moutons.org