As we close out 2020, there is a lot to be forgotten, but more to be remembered! It was a “record breaking” year for many aspects of Maine eBirding and this post will highlight a few metrics from the past 366 days.

2020 was the first year since 2004 that no “state firsts” were reported in Maine, though there were a handful of new county records. eBird county lists are far from “official,” lacking many historic records, but in 2020 all but two counties (Oxford and Sagadahoc) added at least one new species. Most counties added 2-4 but the top gainers were Hancock with 5, Franklin with 6, and Kennebec with 7. 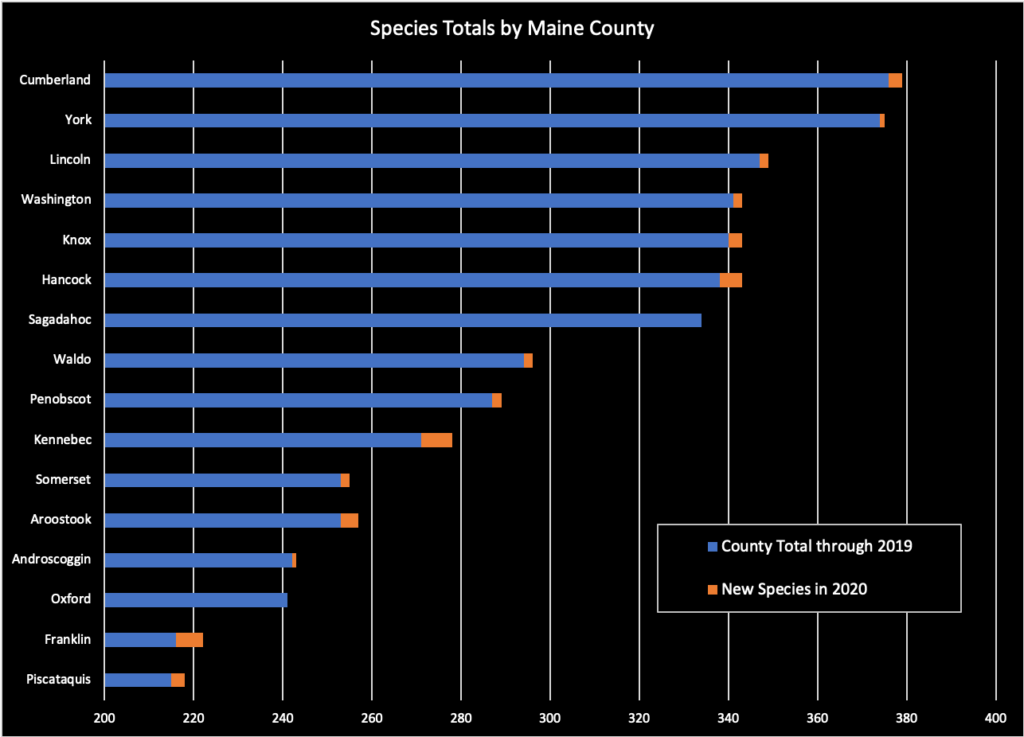 A record number of checklists were submitted in Maine this year with over 93,20! 83,300 of those were complete checklists. This represents an annual growth of 17% over 2019’s count. Charted below are the number of complete checklists submitted in Maine for each week over the year, comparing 2016 through 2020. Interestingly, the weeks beginning 22-May through 1-Jul all had fewer checklists submitted in 2020 than in 2019. This drop is fairly localized to Maine with no other New England states, or the national average, showing a similar decline. Those weeks do represent the periods when all of Maine’s birding festivals would have brought hundreds of birders to Maine, however those were all canceled or went virtual in 2020, so perhaps this represents part of COVID-19’s impact to Maine’s birding tourism and community. 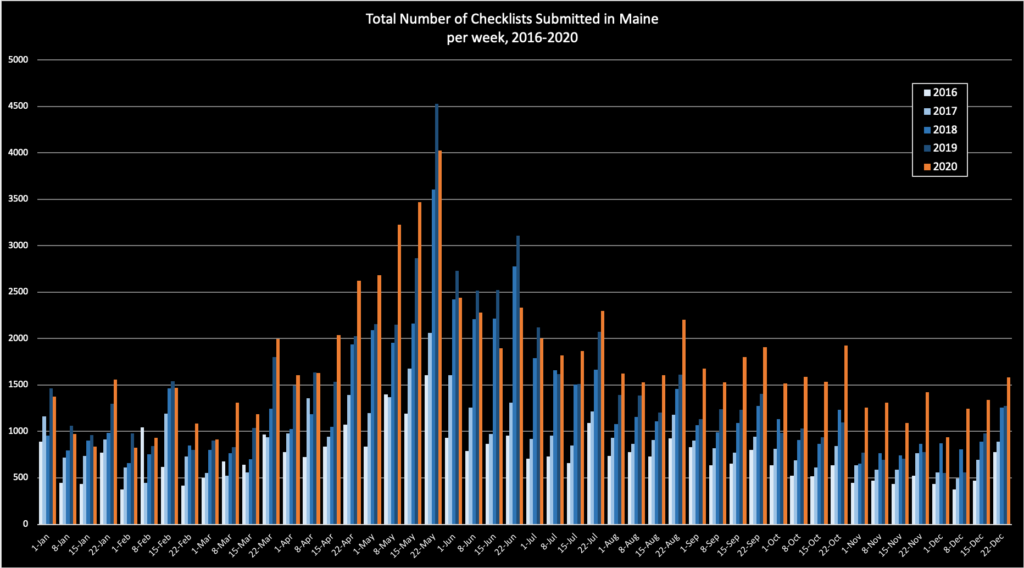 Over 43,700 photos and more than 2,300 audio recordings were uploaded to the Macaulay Library from Maine in 2020. These are impressive numbers, especially given the 24% and 49% growth respectively over 2019 submission numbers. This bring the total media files from Maine, since eBird “joined forces” with the Macaulay Library in September 2015, to 177,400+ photos and 7,350+ audio files. 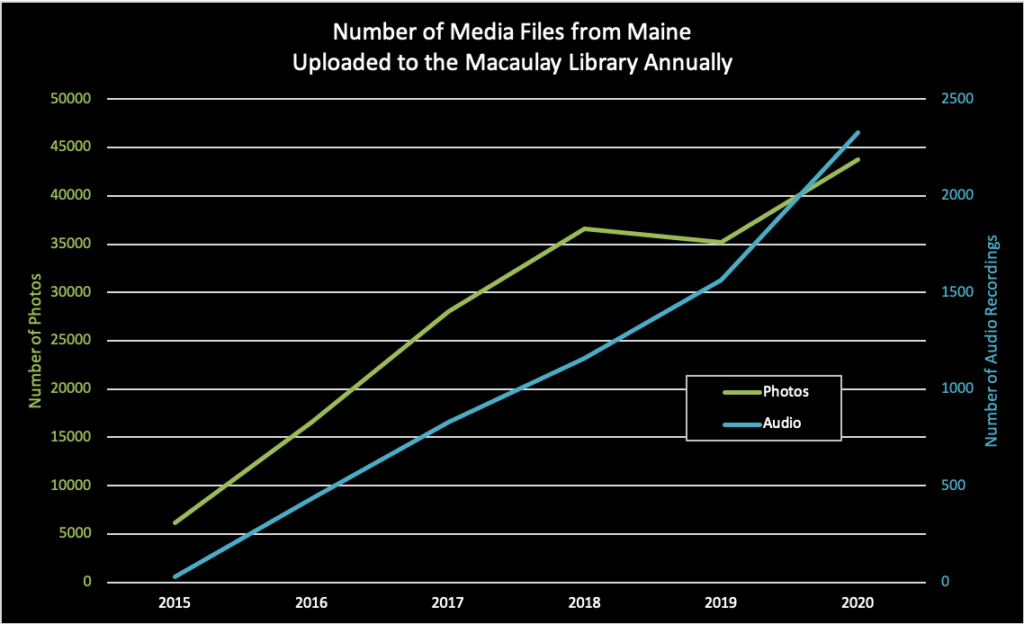 The top rated photo from Maine in 2020 was Luke Seitz‘s stunning Clark’s Grebe, Maine’s second record, that was seen on Togus Pond in Augusta from 8-15 August 2020: 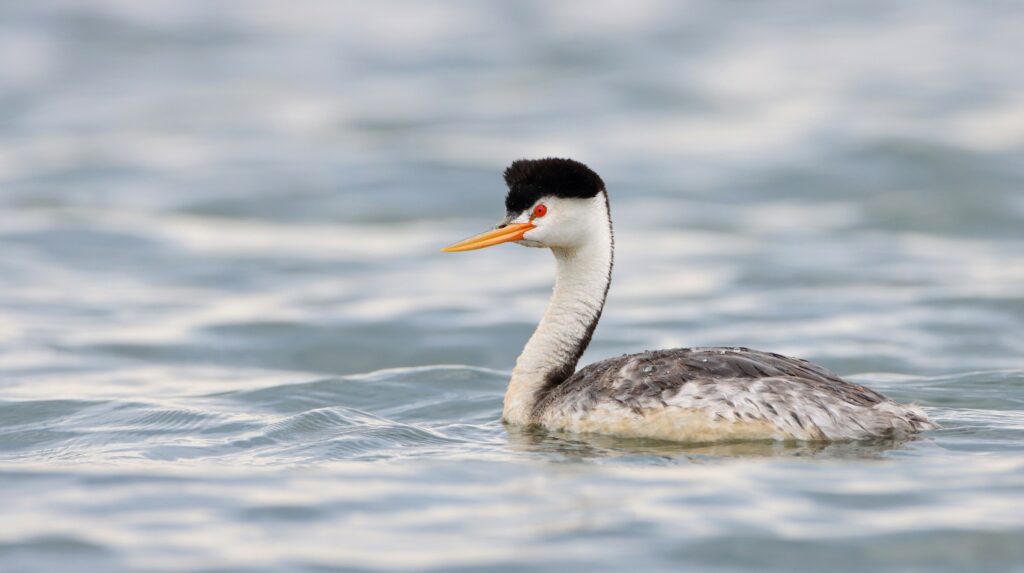 2020 was the “half-way point” for the Maine Bird Atlas (2018-2022) and your contributions in eBird will help make the project a success. 33% of Priority Blocks were completed by the end of the 2020 breeding season, plus 213 species have been confirmed breeding state-wide. Going into the last week of December there were 442 blocks completed for the Winter Atlas.

Data collected as part of the Maine Bird Atlas will provide a comprehensive understanding of the distribution and use of resources by Maine’s breeding and wintering birds and will be invaluable in guiding future species status assessments, priority species’ needs, and identifying and conserving high value wildlife habitats.

Make a resolution for 2021 to keep eBirding and help complete the atlas!