The biggest birding day of the year — Global Big Day —took place on Saturday May 9, 2020. More than 50,000 people from around the world joined in to record their sightings. Close to 300 participants from throughout the West Indies recorded 345 different species of birds! Cuba had the most species by country (135) followed closely by the Bahamas (126) and Puerto Rico (125). Regionally, 1,051 checklists were submitted, 205 more than last year. That’s an incredible achievement — way to go birders!

This year was quite a different experience as much of the world remains under stay at home orders or is following social distancing guidelines. Certainly many of the great open spaces that are go-to spots for birders were not open to the public for safety reasons. Nevertheless, eBird recorded a 32% participation increase from Global Big Day 2019 and more than 120,000 eBird checklists were submitted.  Many of us,  birding from our backyards and balconies, contributed valuable knowledge about our urban and garden  birds. Indeed, there has been a new and renewed interest in and appreciation of the wildlife in our yards, a silver lining to this pandemic.

For the first time, and what we hope to now have as a yearly tradition, BirdsCaribbean formed a Global Big Day fundraising campaign involving a friendly competition between teams of birders to support the Journal of Caribbean Ornithology (JCO). JCO is BirdsCaribbean’s in-house, peer-reviewed scientific publication has served our community for 32 years and counting and needs help to keep its publications free and open-access to the world.

Over 160 people from across the globe joined one of seven teams and have so-far raised  over $15,000, closing in on our original $20,000 goal! The seven teams varied greatly in size and geography but all had the common goal of seeing as many species as possible in a single day. Overall, the teams recorded a whopping 1,485 species in 43 countries – 106 species of which are endemic to the West Indies. 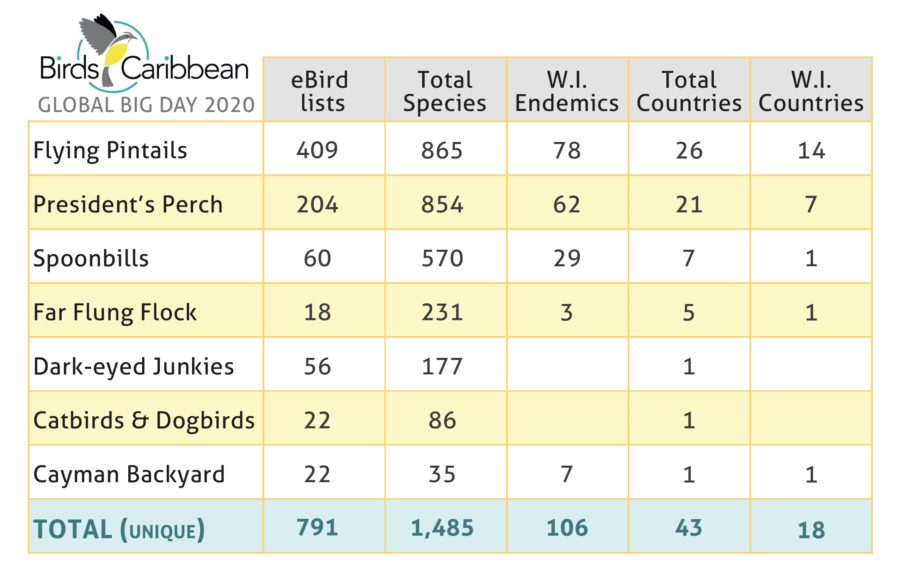 The Flying Pintails, led by Executive Director Lisa Sorenson, claimed the title for the most species (865) and the most West Indies endemics (78) recorded. This was the largest team by far, composed of 73 different individuals submitting eBird checklists from around the world. President’s Perch, a team of 32+ led by BirdsCaribbean President Andrew Dobson, came in a close second with 854 species and 62 West Indies endemics.

However, smaller and more local teams also had their advantages. When the total amount of species seen was divided by the number of people on the team, Far Flung Flock came in first, with an average of 33 species observed per person. The Dark-eyed Junkies observed a whopping 177 species, which is very impressive because their team of 16 were all based in the same country. Congratulations and thank you to all the teams for your enthusiastic participation; we will be sharing more about our experiences in a second GBD 2020 blog article. 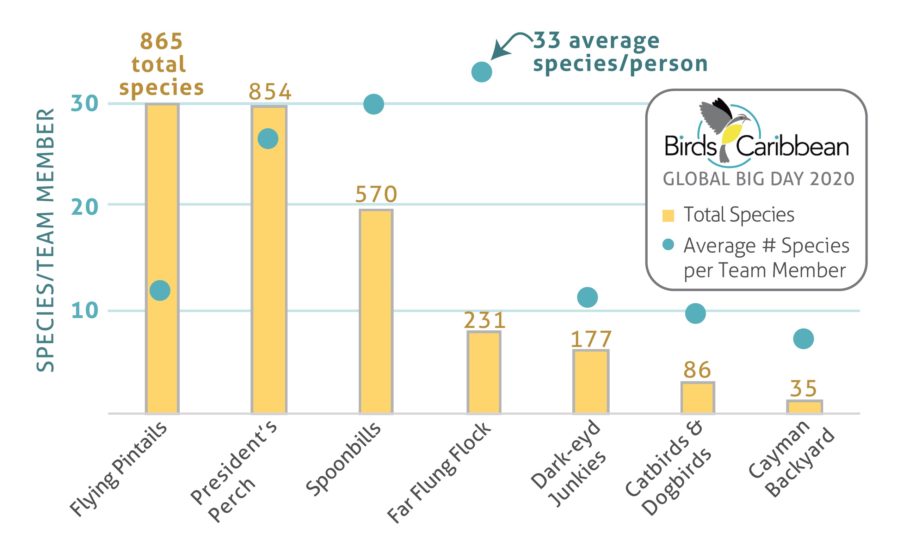 The outstanding eBirder of our Global Big Day campaign was Miguel Garcia Cruz (Mexico) of the Flying Pintails, who over 11 hours recorded an incredible 114 species! He was followed by Daniel Hernandez (Mexico) of President’s Perch, who recorded 113 species. What a close finish!  Both win a year’s membership in BirdsCaribbean and some awesome BC swag!

Special commendations go out to the following birders who had 15 or more endemics on their GBD checklist on May 9th:

Closing in on our Fundraising Goal and Thank You!

The Flying Pintails to date are in the overall lead for fundraising efforts, with over $6,600 and counting. Though when we account for team size, Far Flung Flock is far ahead, with Catbirds and Dogbirds not too far behind.  A huge THANK YOU to all who have supported our campaign either through a donation and/or by joining one of the birding/ fundraising teams. It was an incredibly fun day and we look forward to doing it again next year. In the meantime, if you are able, please donate to our campaign to support science and conservation of Caribbean birds.  We are very close to our $20,000 goal, your gift could put us over the top!

Team Profiles and Results on eBird

You can visit each birding team’s page profile on eBird to see maps of the team’s  countries/ islands where birds were sighted and their checklists. You can also visit each team’s GoFundMe page and donate to specific teams to help them reach their fundraising goal, or donate to the general campaign.