As a young teacher at Geelong High School in 1979, I was looking for an activity to engage students for the last few days of the school year. Being a keen birder, I decided to offer the students the opportunity to survey the adjoining parkland, Eastern Park (eBird hotspot Eastern Park (Geelong)), to find out what bird species were present. This student project, which continued for many years, also grew on me. I soon found myself spending many enjoyable hours surveying the birds and taking notes on numbers, distribution, and behaviour, including feeding and breeding. I have continued this project uninterrupted for the past 37 years.

In September 1990, I added three 2-hectare, 20-minute survey sites within the park and began regular quarterly surveys which I continue to this day. The three sites represent the main habitats of the park – playing fields, Geelong Botanic Gardens, and open parkland (eBird Hotspots Eastern Park—Stormwater Harvesting Lake, Geelong Botanic Gardens, and Eastern Park—Northern Section, respectively). Perhaps fortuitously, the site I had chosen to represent the playing fields was re-developed as a stormwater harvesting lake. 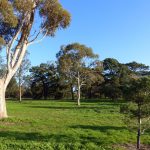 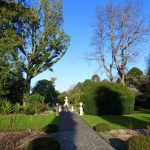 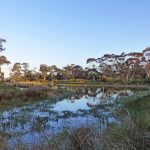 By August 2016, I had contributed 876 checklists to eBird Australia for Eastern Park. Just over 150 species have been recorded and 52 species have bred or attempted to breed. The data presented in this article is based on day lists for all sites combined. Eastern Park is an area of 80 ha set aside by the colonial government in 1849 as a botanical reserve. From the beginning, conifers were planted as the preferred trees. Today the park consists mainly of open spaces containing a large collection of conifers, along with avenues of sugar gum Eucalyptus cladocalyx. Within the park is the Geelong Botanic Gardens, a 4 ha area with much greater vegetation diversity, both structurally and botanically. There have been no particularly major changes to the vegetation in the park over the survey period. Senescent pine trees have been replaced with more pines, and small patches of native plants have been established. From the late 1980s to the mid-1990s, a small wetland within the park provided habitat for waterbirds such as Dusky Moorhens, but this fell into disrepair and unfortunately has not attracted waterbirds for many years. A stormwater harvesting lake, established in April 2012, once again attracts waterbirds to the park; Australasian Grebes have bred on the lake several times and Dusky Moorhens have returned. A number of species are always present in good numbers. These are the common farm and town birds of southeastern Australia: Australian Magpie, Red Wattlebird, Magpie-lark, Little Raven, Common Blackbird, Silver Gull, Spotted Dove, Grey Butcherbird and Masked Lapwing. Brown Thornbills and White-browed Scrubwrens are also always present, but in lower numbers, and restricted to the denser vegetation of the Geelong Botanic Gardens. 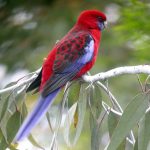 Crimson Rosellas are found in the park from autumn until spring. 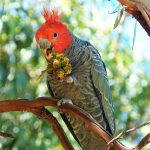 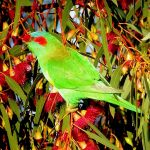 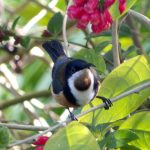 Some species are regular seasonal visitors. A colourful favourite is the Crimson Rosella, generally an autumn-spring visitor, but summer records are not unknown. Regular autumn-winter visitors are Yellow-faced Honeyeaters, White-naped Honeyeaters, Golden Whistlers, Gang-gang Cockatoos and Pink Robins. Australian Hobbies are more likely to be seen from late winter until early summer. Black-faced Cuckooshrikes are recorded more frequently in spring. Purple-crowned and Musk Lorikeets usually arrive in good numbers in late summer to feed on nectar and pollen from the Sugar Gums, which flower profusely at this time of year. The Eastern Spinebill is usually an autumn-winter visitor, although from 1993 to 2006 this species was frequently present through the spring-summer seasons when breeding was recorded. Marked changes in species composition within the park have taken place since 1979. Galahs, Rainbow Lorikeets, Eastern Rosellas, Pied Currawongs, Yellow-tailed Black-Cockatoos, Crested Pigeons and Noisy Miners have all arrived and become established over this period. With the possible exception of the Yellow-tailed Black-Cockatoo, these species have all expanded their range in southeastern Australia in recent decades.

The Eastern Spinebill is usually an autumn-winter visitor, although from 1993 to 2006 this species was frequently present through the spring-summer seasons when breeding was recorded.

Rainbow Lorikeets arrived in the 1980s and are now common.

Eastern Rosellas arrived in the early 1990s and are now common.

Pied Currawongs arrived in the mid-1990s and by 2005 were present year-round.

Yellow-tailed Black-Cockatoos were not recorded before 1997, but are now frequently recorded.

Crested Pigeons arrived at Eastern Park in 2009 and are now frequently observed.

Noisy Miners arrived in the park in 2010 and stayed to breed. 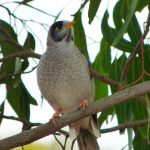 Noisy Miners are a recent arrival. 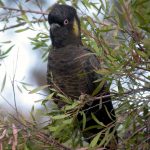 The Yellow-rumped Thornbill population has become much reduced in the park.

Yellow Thornbill, once frequently recorded, have not been seen since 2005. 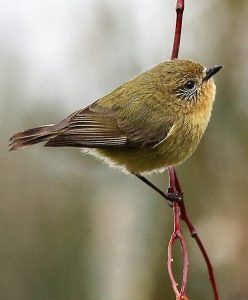 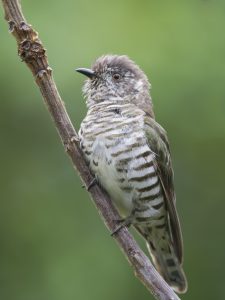 Another species that was once numerous and widespread is the Willie Wagtail, now less numerous and more restricted in distribution across the parkland; other species such as Common Starling, Silvereye, European Goldfinch, Laughing Kookaburra, Rufous Whistler and Scarlet Robin have decreased in frequency over the years. Rufous Whistlers, once frequent spring visitors, are now rarely observed.

Shining Bronze-Cuckoos rarely, if ever, visit now that their hosts, the thornbills, have declined in number.

Willie Wagtails, once recorded in good numbers across the park, are now scarce.

Over the years there have been many birding highlights. Two stand out: 1) a female Australian Hobby returning with prey and perching at distance from the nest tree in a vain attempt to get at least one of the nestlings to take its first flight, and 2) a male Collared Sparrowhawk flying unseen above my head into a copse of pines trees, uttering an unfamiliar call, to deliver prey to the female which came from the nest to greet him. Each of these pivotal observations led to many hours of enthralling observation of the breeding behaviour of these wonderful species. Ever so rarely, species such as Black-eared Cuckoo, Blue-winged Parrot, Swift Parrot, Red-rumped Parrot, Weebill, Satin Flycatcher, Black Falcon, Peregrine Falcon and Wedge-tailed Eagle have put in cameo appearances. 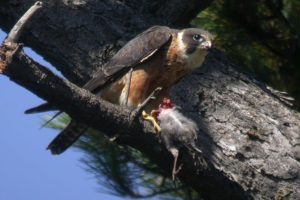 Female Australian Hobby returns with Common Starling prey for nestlings that are almost ready to fledge. 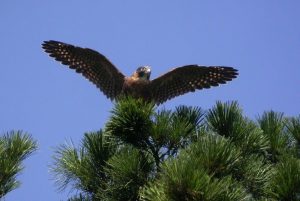 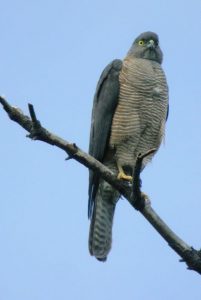 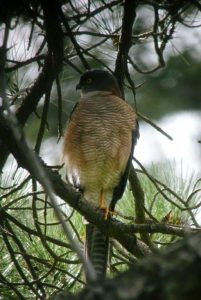 This study has documented the considerable changes in the bird life of Eastern Park that have occurred over the past 37 years. In doing so it shows the value of long-term surveys of local sites and of common species. I encourage all observers to submit their records to eBird Australia. Doing so builds a picture, in a readily accessible database, of the birdlife over time at their local patch, providing invaluable insight into local dynamics.

Inspired by Craig’s story to start your own patch?

It’s as easy as starting to count the birds in a spot you like to visit. In fact, if you regularly search for birds on your way home, during lunch, or do a monthly Atlas checklist, you may already have one! Check out how to make your own patch here – it can even be your own backyard.

Already have a patch? We’d love to hear from you!

Craig thanks the many people who contributed to this story:

My thanks to all the students who assisted me, to the town planners of early Geelong who had the foresight and initiative to set aside Eastern Park, and to eBird for providing a wonderful repository for the data. My thanks and gratitude go to Margaret Cameron and Elizabeth Macpherson for their encouragement through many years of this project, and to Richard Alcorn for his assistance with producing this report. All photographs by Craig Morley except Yellow Thornbill (David Tytherleigh) and Shining Bronze-Cuckoo  (John Barkla).