The time for Christmas Bird Counts is upon us and with it comes the first opportunity to document a breeding bird record for the FINAL Atlas field season.  What species starts setting up breeding territories during the months of frigid temperatures, biting winds, sleet, and snow?  Virginia’s largest breeding owl species, the Great-Horned (Bubo virginianus).

Did you know?: The latin name for Great-horned Owl is Bubo virginianus, because the species was first documented in the Virginia colonies in the mid-1700s by European naturalists.  While they breed throughout North and parts of South America, this impressive nocturnal hunter is forever tied to the Commonwealth of Virginia.

By December, Great-horned Owls may be engaging in pair-bonding behaviors with their mates, as well as prospecting for a breeding territory.  These owls tend to maintain the same partners, year after year.  Reaffirming their pair-bond often manifests as complex vocal duets.  When out birding in the pre-dawn hours or taking a hike through dark woods, keep your ears tuned for the low-pitched hooo hoodooo hoooo hoo ‘song‘ of the male and a slightly higher pitched response from the female.  Hearing these duets is a good indicator that you are near the territory of a breeding pair, whether it is too males counter-calling or pair duetting.  If you’re lucky, you might get to hear the strange, nasal barking guwaay call of female, when she’s responding to a courting male. 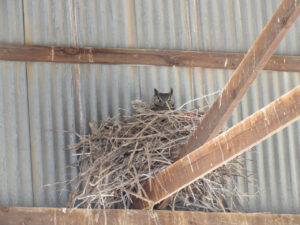 Like many birds, Great-horned owls exhibit a high-level of site fidelity, meaning that they will return to the same location year after year.  If you know of an area where you suspect owls may have bred in the past, return and search it this winter to confirm that hunch.  Often, an owl pair will re-use the same nest site, resulting in massive nests after years of additions and repairs.  The winter months are the best time to spot such nest sites, since leaves are not yet obscuring it from view.  Size, structure, and placement of nests is similar amongst the large raptor species, including Bald Eagle, Red-tailed Hawk, and the Great-horned.  If you’re lucky enough to find a suspected raptor nest on your winter birding trips, consider visiting it periodically to find out if it is active and what species is in residence.

While CBC protocols do not require nocturnal surveys, many intrepid birders get out for an early (or late) owl hunt in their assigned areas.  If you’re able and willing to do this, it is a great opportunity to log this species as a potential breeder.  As the season progresses and eggs are laid, Great-horned Owls tend to vocalize less making detection more difficult.  Now is the time to check this species off the list for VA BBA blocks in need of nocturnal survey.

If you do document a Great-horned Owl this Christmas season, please report it to the VABBA2 ebird portal via your computer at ebird.org/atlasva or your smartphone, by setting the portal to the VA Breeding Bird Atlas. 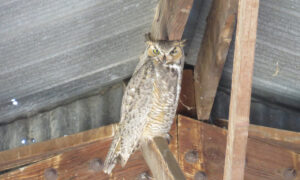 For those of you who are ready to dive into Atlas effort for 2020, there are many Atlas priority blocks that still need nocturnal effort.  If you’re interested in seeing what blocks do or do not have nocturnal effort in your neck of the woods, check out the Atlas Effort Map.

This map allows you to select different data layers to display, including the nocturnal effort map.  Clicking on this layer will allow you to see what priority blocks still need nighttime survey hours.  Perhaps your Christmas Bird Count route overlaps one of these priority blocks!  If not, you can still contribute your owl observations through the Atlas eBird portal.