The work carried him up and down the East Coast, but was primarily based in Florida. There, Epperson ventured into forests, dunes, marshlands, swamps and islands looking for rookeries and nests, and compiled exhaustive inventories of species. His research informed related land management and conservation plans—most notably in the Lyonia Preserve, where he helped grow the Florida Scrub Jay population from one bird to the fourth largest in the state.

The work was adventurous. It required spending long hours alone in isolated backcountry areas, sometimes for days on end.

“There were some hardships with weather and such,” says Epperson, 60. “But all things considered, for a guy like me, it was the greatest gig in the world.”

Epperson became a consultant in 1986 after years of working for the U.S. Fish and Wildlife Service, where he helped reintroduce species like Andean Condors, Whooping Cranes and Bald Eagles. Before that, he’d researched Ruffed Grouse as a graduate student at the University of Tennessee and earned a degree in forestry and wildlife ecology from Virginia Tech.

Epperson’s track-record of ornithological experience began with his parents teaching him to ID birds at feeders surrounding their home near Virginia’s Peaks of Otter.

“I caught the birding bug early, around the age of eight,” he says with a laugh. The activity quickly became a guiding obsession. “Luckily, I was able to figure out how to make a living at it. Otherwise, [trying to spend so much time in the woods hunting down birds] might’ve been problematic!”

Epperson retired to the mountains of Bedford County in the mid-2010s. He soon joined the Lynchburg Bird Club and assumed the post of field trip coordinator. But transitioning to casual birding proved tough. The VABBA2 arrived as a welcome, science-driven respite.

Its size and scope were attractive, says Epperson. “I understood this was an extremely important conservation effort and, given my expertise, wanted to pitch in as best I could.” 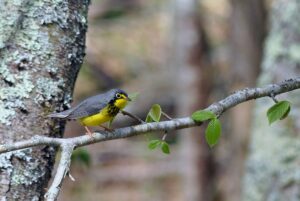 Epperson’s contributions have been prolific. He signed up to bird in dozens of priority blocks in Bedford County and surrounding areas. He advocated for club participation and led Atlas-focused fieldtrips. He became an on-call resource for local eBird initiates, breeding code issues, questions of identification, canvassing efforts, you name it.

When asked about the over-the-top efforts, Epperson responds with humor and humility.

“The advantage of volunteering is, I can wake up and not have to go birding,” he says. “I can play hooky and not feel bad about it.”

That said, most mornings find him reaching for his binoculars. To date, he’s spent more than 350 field-hours working on the project and logged breeding confirmations for about 110 species. The tally includes a slew of fascinating Region 9 finds—and a number of firsts.

In Amherst County, Epperson and his mother, Betty, spent more than an hour stalking a male Black-throated Blue Warbler along a rural a country road. Eventually, the bird led them to a nest with chicks. Another time, it was Canada Warbler. Both remain lone Lynchburg-area VABBA2 breeding confirmations for either species.

“To me, Atlasing is kind of like a sport,” says Epperson. “There’s definitely a unique pleasure in getting these confirmations”— particularly the ones that require added work and strategy to achieve.

Entering the VABBA2’s final season, Epperson has upped the ante. He’s leading a taskforce of about a dozen Lynchburg Bird Club members to finalize around 30 priority blocks in Bedford, Campbell, Amherst and other surrounding counties.

Shutdowns related to the COVID-19 pandemic have made achieving that goal harder.

“We’ve had to cancel all our club field trips, which were going to target these areas exclusively,” says Epperson. But that doesn’t mean he’s giving up. To the contrary, “We’ve just had to get more careful with organization and coordination.” 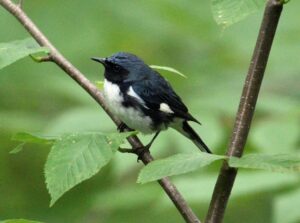 He and others—including Amherst’s Donna Mateski de Sanchez and VABBA2 director Dr. Ashley Peele—have compiled an online spreadsheet tallying remaining atlasing hours and species confirmations for each block in their local area. They’re using it, along with group text messages, conference calls and emails, to divvy up assignments and maximize both efficiency and safety. To minimize traveling distances, they’re reaching out to volunteers who live near targeted blocks.

Though safety precludes carpooling, team members sometimes drive separately and converge on an area ‘together, but separately.’ They use cell phones or walkie talkies to communicate and report interesting finds.

“From a conservation standpoint, [the VABBA2] is too important to just completely throw in the towel,” says Epperson, emphasizing the project is in its final year. “We’re staying motivated. We’re keeping safety in mind and adapting our methods accordingly.”

In this case, adaptation includes following COVID-19 guidance, including:

Looking ahead, he hopes other members of the birding community will follow suit in adapting their birding to fit within coronavirus safety guidelines.

“On the bright side, I think this is a great time for folks to be doing more birding,” says Epperson. Faced with a deluge of bad news, atlasing is like a health tonic—and it fits within the parameters of acceptable health-related outdoor activities as outlined by Governor Northam’s stay-at-home order.

“You get out there in nature and focus on the birds and the worries start to melt away,” says Epperson. “To me, it’s equal parts pick-me-up and respite. I almost always feel a little better after I’ve been out birding.”

And isn’t that something we could all use a bit more of right now?