The sun is rising over rural Buchanan County and 20-year-old Logan Anderson is sitting on the hood of his car on the shoulder of a gravel fire road, listening intently. He spends exactly five minutes scribbling in a field notebook, noting species of birds, how many of each he sees and hears, and about how far away they are.

Maybe two minutes in, Anderson homes in on a sound previously experienced only through digital recordings and speakers—the call of a Mourning Warbler! His heartrate quickens. 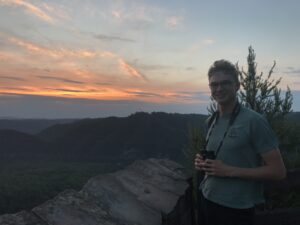 “For me it was a life-bird, so I got really excited,” says Anderson, a rising junior studying wildlife conservation at Virginia Tech. Everything inside of him was screaming, ‘Run and go look, see if you can find it!’

Instead, Anderson gritted his teeth and focused on the task at hand: It was the spring of 2019 and he’d been hired to conduct abundance surveys for the Virginia Breeding Bird Point-Count (VABB-PC), a sister project of the VABBA2. The comprehensive study is the first of its kind in state history and will provide instrumental data for future conservation efforts. Life birds could wait.

“That said, as soon as the time was up, I dropped everything and started trying to find that bird,” Anderson confesses with a laugh.

Playback and pishing led to aggressive responses— “a loud, slow, churring song similar to a [Kentucky Warbler], but choked on marbles,” he says. It was coming from dense undergrowth on a near hillside. Anderson kept at it and, minutes later, the gorgeous yellow-bellied bird swooped in, lighting on a branch not five feet away. Anderson froze, held his breath, watched in wide-eyed rapture. 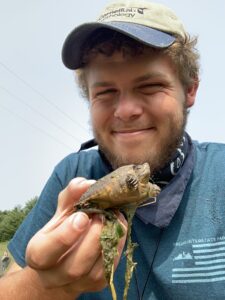 “The second it flew away, I was grabbing for my phone,” he says. He scrambled to dial long-time friend and fellow field tech, Andrew Rapp, a student of environmental science and wildlife biology at William & Mary. “We’d made a pact where, whenever we saw something interesting, we had to call the other immediately. … He answered and I just started going nuts, shouting like crazy about what I’d just seen.”

By then, Rapp and Anderson had been camping together for a few weeks. They would spend the better part of two months doing so while birding for the VABB-PC and VABBA2 in remote areas throughout far southwestern Virginia. Looking back on their time together, they agree: Such experiences were par for the course.

“I was getting valuable field experience, and, don’t get me wrong, that was great,” says Rapp. But immersing himself for weeks on end in one of Virginia’s premier birding hotspots with a good friend?

Rapp and Anderson met as young teens through Charlottesville’s Blue Ridge Young Birders Club. Rapp helped found the club in 2012. Anderson grew up in Lynchburg and discovered it a few years later.

“I decided to go to a meeting and try it out, and got hooked right away,” he says. Though he’d been birding since the age of 5—and became a self-identified zealot after spotting his first Blackburnian Warbler in the eighth grade—Anderson had almost never done so with other kids. To find dozens of passionate youths congregating regularly to discuss and participate in the activity seemed miraculous.

“We all knew that feeling,” says Rapp. “We understood what it was to love something so much and not have anyone your own age to share it with.”

As such, club members made a point of recruiting peers. They went out of their way to create an atmosphere that was welcoming, scholarly and supportive.

“Those guys knew so much,” he says. Unlike him, many were home-schooled and birding was a part of their daily curriculum. “So, I was kinda quiet at first. I just tried to pay close attention and learn everything I could from guys like [Andrew, Gabriel Mapel and others]. As a result, my birding improved drastically, and it happened really, really fast.” 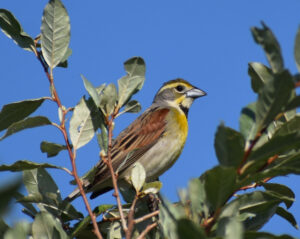 By the time the VABBA2 launched in 2016, Rapp and Anderson were good friends. They and other club members viewed the project as a chance to gain valuable field experience and contribute to a integral conservation cause. Both atlased as much as possible, spending many afternoons and weekends surveying priority blocks near their homes. Anderson learned about the VABB-PC in the spring of his senior year of high school after meeting then field technician and Virginia Tech student, Garrett Rhyne, at a bird-related event.

“Garrett told me about the project and what he was doing, and, to me, it sounded like a dream job,” says Anderson.

Impressed by Anderson’s skills and over-the-top passion, Rhyne recommended him to project director Dr. Ashley Peele. She interviewed Anderson and subsequently offered him a job conducting point-count surveys in Lynchburg and surrounding areas in the spring of 2018. The gig was skill-sharpening and affirming.

“It was hard work, but I was getting paid to go birding, which is the thing I love most in the world,” says Anderson. “There were days when I almost couldn’t believe it. It often felt pretty surreal, especially early on.”

Anderson matriculated to Virginia Tech and continued to bird for the VABBA2. In the winter of 2019, Peele asked if he’d be interested in surveying under-birded areas in far southwestern Virginia for the VABB-PC. Anderson said yes. She then asked if he knew of anyone that would be game to come along? Rapp’s name came immediately to mind.

“When I got the job offer from Ashley, that was a pretty awesome moment,” says Rapp, who hopes to become an ornithology professor at a major university and study birds. Given his professional aspirations, “That was affirming and tremendously exciting.”

Rapp and Anderson started making plans. They spent May through June camping together in parks and living in a rustic cabin while birding in Buchanan, Wise, Tazewell, Scott, and Dickinson counties.

The two woke up predawn to conduct nocturnal surveys and listen for Eastern Whip-poor-will and owls. From 5-10 a.m., they birded in some of the most remote and interesting areas in the state, completing an average of about 25 point-counts each per day. After that, they’d go looking for breeding evidence in places like Breaks Interstate Park, Clinch Mountain Wildlife Management Area, Natural Tunnel State Park, Flag Rock Recreation Area, and more. They reconvened in the evenings—exploring local swimming holes and sharing the day’s birding tales. 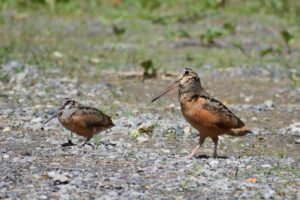 “It’s such a different world down there than what we were used to,” says Rapp. “There wasn’t a single day where we weren’t seeing something exciting and new.”

Of course, there were hardships. For instance, Anderson woke up in his tent one night getting drenched by a rainstorm.

“It took about two seconds to realize I’d forgotten to put on my rain fly,” he says. By then, his sleeping bag was soaked. The mountain night was cold. He bit his lip and went to sleep in the front seat of his car.

Additionally, as with most roommates (or in this case, fieldmates), Anderson and Rapp confess they occasionally got on one another’s nerves. But overall, they agree: The pros eclipsed the cons. Each is looking forward to returning to work for the VABB-PC around June 8.

“I’m not gonna lie, I spent a lot of time this year sitting in class daydreaming, wishing I was back in southwest Virginia with Andrew,” says Anderson. “It was such an amazing time. We had so much fun and saw so many cool things. I can’t say how happy I am to know I’ll be back out in the field and on the job soon.”