College-aged field technicians are gaining valuable professional experience working with the VABBA2—and having awesome adventures along the way.

Did you know that 15 mostly college-aged field technicians have been working with the VABBA2 coordinator  to conduct Virginia’s first comprehensive avian point-count study? Known as the Virginia Breeding Bird Point-Count (VABB-PC) project, the effort launched in 2017 to augment data collected by citizen-scientist volunteers.

The information is crucial for affecting targeted conservation measures.

“Abundance data tells us what number species are occurring in, which is key to building an accurate picture of their current population status in the Commonwealth,” says Peele. “The VABB-PC is going to give us much more accurate population estimates than currently available for many species, as well as density maps to show where they’re more or less abundant across the Commonwealth.”

Combined with the VABBA2, the study will help wildlife biologists, ecologists, and researchers draw better conclusions—and, in some cases, ask better questions—about the status of Virginia’s breeding bird populations, as well as their responses to habitat loss, reforestation and current conservation policies.

“And that will allow targeted efforts in geographic areas where species of greatest concern are most in need of help, or where maximum conservation outcomes can be achieved,” says Peele.

But the VABB-PC has other positive aspects: The project is serving as a professional gateway for next-generation avian conservationists. College-aged field techs gain valuable on-the-ground experience, which boosts résumés and informs decisions about future career tracts—and they’re having a blast along the way.

“I accepted the job thinking of it as, basically, a neat career-building opportunity,” says 23-year-old former (and now returning!)

VABB-PC field technician, Garrett Rhyne. While that was certainly the case, the experience also brought once-in-a-lifetime birding adventures. “I had so much fun and saw so many amazing things. I look back on that time and am just awestruck: I feel incredibly grateful; it that was coolest thing I’ve ever done, by far.”

Interested in learning more about the world and lives of VABB-PC field techs? Below, we profile two of our past technicians. 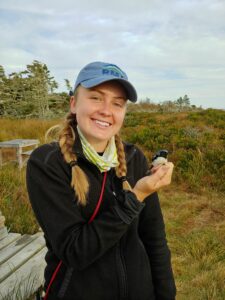 Jessie Wilson matriculated to Bridgewater College with intentions of becoming a veterinarian. Then environmental science electives introduced her to wildlife biology—and everything changed.

“I’d always loved animals, and knew I wanted to work with them as a career, but honestly, it hadn’t occurred to me there were other ways to achieve that goal,” says Wilson, who grew up in Roanoke. While her parents were avid campers and hikers, wildlife conservation wasn’t a topic of family discussion. The word ‘animal’ tended to evoke images of pets and livestock.

Studying with professors in the field was fascinating and revolutionary. Wilson donned waders and explored freshwater ecosystems, took soil samples and catalogued microfauna, hiked in nearby National Forest lands to learn about native trees and plants, and more. Becoming a vet seemed less and less appealing.

“I fell in love with being outside, with immersing myself in and observing nature,” says Wilson, now 23. She subsequently shifted academic trajectories, choosing to double major in environmental science and wildlife biology. Still, she was “pretty clueless about what I wanted to do, specifically. Everything was so new and interesting, trying to focus on one particular thing felt impossible.”

A second semester sophomore ornithology class brought clarity. Learning the basics about birds, behaviors and habitats, something fell into place.

“The more I learned, the more I had to know,” says Wilson with a laugh. She found herself dedicating extracurricular hours to studying guidebooks, researching species, combing local landscapes looking for birds and sharpening identification skills, and more.

“The attraction was magnetic, and it got stronger by the day,” says Wilson. Realizing she was hooked, she “decided to embrace this new passion and basically just dive in headfirst.”

“I was just starting out, so, above all, I viewed the project as a once-in-a-lifetime learning opportunity,” says Wilson. It enabled her to spend hours at a time conducting breeding bird surveys with Puffenbarger. The result was like one long, wildly intensive ornithological masterclass.

“Her knowledge of birds was awe-inspiring,” says Wilson. “I tried my best to stay absolutely focused, take notes, and try to absorb everything. … It felt like I was cramming five years of education into a few short weeks. I learned so, so much.”

The project led to two things. First, it inspired Wilson to pursue a career in avian science and conservation. Second, a position working as a seasonal field technician for the VABB-PC in 2019, at the close of her senior year.

“Getting that [job offer] was encouraging and affirming,” says Wilson. “It told me I was on the right track.”

She spent that May and June conducting about 500 point-count surveys and seeking to confirm breeding birds throughout the Shenandoah Valley. Along the way, she spotted more than 100 species, honed her identification skills, and learned more about the nuances of preferred habitats.

“It was such an amazing experience,” says Wilson. Morning routines often included pre-dawn drives “into the deep mountains, drilling birdcalls along the way. I’d hike into the woods with the sun rising over a beautiful valley and spot something like a Black-throated Blue Warbler with food in its beak flying to a nest of fledglings. To me, it doesn’t get much better than that.”

Meanwhile, Wilson was supercharging her resume.

“Working for the VABB-PC was a big step in making my dream of working with birds professionally come true,” she says. It quickly led to jobs in Nova Scotia and California, helping with migrating songbird studies and recovery efforts for California Condors, respectively. While COVID-19 has brought disruptions, Wilson hopes to resume fieldwork soon. She plans to enter graduate school in the fall of 2021 (she’s unsure of where) and pursue a doctoral degree in avian ecology.

“The VABBA2 truly introduced me to a new world of possibilities,” says Wilson. Working on it and the [VABB-PC] brought “experiences that have laid the groundwork for my career.” 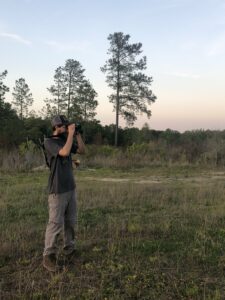 Twenty-year-old VABB-PC field technician, Drew Chaney, has been birding as long as he can remember.

“I don’t have a clue where the interest came from,” he says. “My parents weren’t into it at all. I just have a memory of being about five years old, looking for guidebooks in the library. I remember poring over them, looking at pictures, then going out and trying to find birds in my backyard.”

The efforts marked the beginning of a defining passion. It started with Chaney asking his parents for binoculars to better spot faraway birds. They assented and scopes became a fixture of neighborhood walks and family trips. Reading about regional rarities—the Chaneys were then living in Florida—led to asks about visits to nearby parks and natural areas. Next came joining bird clubs and attending field trips.

“I remember going on my first Audubon walk and spotting a Yellow-billed Cuckoo” around the age of seven, says Chaney. “From that moment, I was totally hooked. Birding was constantly at the front of my mind.”

Chaney’s parents embraced their son’s enthusiasm and worked to build the activity into his homeschool curriculum. The approach led Drew to adapt a more scientific focus. Combined with added time outdoors, it inspired a broader interest in nature: Learning about birds and their preferred habitats morphed into researching native trees, plants, geology and more. By the time the Chaneys moved to Charlottesville around 2008, Drew was set on pursuing a career in avian conservation.

The interest led him to join the recently founded Blue Ridge Young Birders’ Club (BRYBC) around 2014. The organization was the brainchild of a quartet of bird-loving preteens, who’d launched it in 2012 with the help of Monticello Bird Club sponsor, Eve Gaige. Better still, most of its 21 members were home schooled.

“Up to then, I’d almost exclusively birded with older adults,” says Chaney. This was the first time he’d met and had regular access to children whose passion for birding rivaled his own. “For me, it was like finding a home.”

When the VABBA2 launched in 2016, Chaney says participation was a no-brainer. He and other club members began atlasing in local and regional priority blocks immediately. Chaney met VABBA2 director, Ashley Peele, at the 2018 Mount Rogers Naturalist Rally. She was impressed by his volunteer efforts and work conducting biological surveys for the Charlottesville-based Center for Urban Habitats (CUH). Peele offered Chaney a job as a field technician the following year. 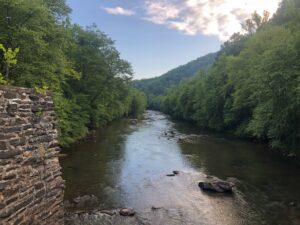 He enthusiastically accepted—and subsequently spent May and June of 2019 conducting nearly 1,000 point-count surveys in the counties of southern Albemarle, Fluvanna, Buckingham and Amherst. Chaney calls the experience valuable and lists a slew of reasons.

“It was a résumé-builder, for sure,” he says with a laugh. The 20-year-old has been attending classes at Piedmont Community College. He hopes his work with the CUH and VABB-PC will lead to a spot at a top university conservation program.

Second, Chaney likens the VABB-PC to a birding-by-ear bootcamp. It also helped him investigate linkages between variations in similar habitats and the species such differences attract. But the best part was getting to deeply explore one of the state’s most under-birded counties.

“If you looked at eBird maps before I started out, Buckingham County had a lot of blank spots,” says Chaney. He combed remote country lanes and fire roads, hiked into obscure public and private lands to fill gaps. “Now, it’s a different story. You could point to pretty much any road on a map of that county and I could tell you what kind of birds are going to be there.”

The work introduced him to rarely trodden hotspots—particularly successional habitats in logging tracts. There, different stages of growth were sandwiched together, often in highly remote areas.

“There was just a tremendous amount of species variation, which, for me, was a really pleasant surprise,” says Chaney. A span of a few miles might bring glimpses of Yellow-breasted Chats, Red Headed Woodpeckers, Ovenbirds, Hooded and Prairie Warbler, Wild Turkey, Northern Bobwhite, White-eyed Vireo, Louisiana Water Thrush, and many more.

Chaney enjoyed the work so much that he hopes to parlay his knowledge into seasonal surveying gigs with breeding bird atlases in other states.

“On the one hand, it’s just such an adventure, you never know what you’re going to see,” says Caney. On the other, he adds with a chuckle, “Can you name another summer job that’s centered around birding for six to eight hours a day?”