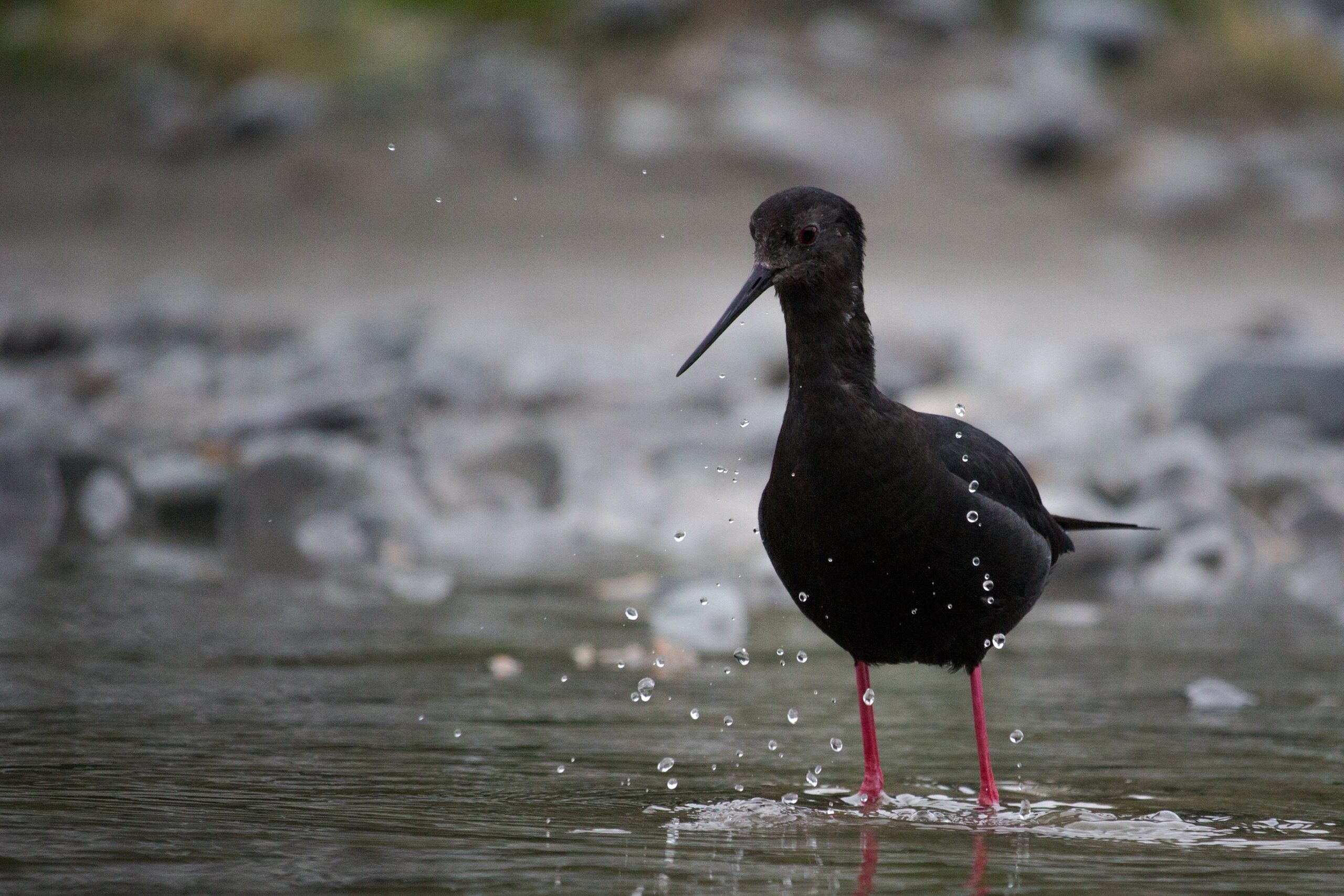 Rare birds are often a birder’s dream to see. A distant vagrant or a rare endemic species can be the highlight of anyone’s day, or even their life! We’re sure as you read this article some rare sightings come to mind as amazing memories. This raises three key questions though:

What is a rare bird in New Zealand?

A species is considered rare in New Zealand if it is seen beyond its known range, or is known to have a very small population, often fragmented and isolated in managed reserves or certain habitats. Rare species, particularly seabirds, can also be found washed ashore around the New Zealand coastline. ‘Wrecks’ of sub-Antarctic species are a regular feature of the New Zealand coastline (Taylor 1999). Over the years Birds New Zealand (formerly the Ornithological Society of New Zealand) has amassed an ever-changing list of rare and reportable species. This list is based on the 1999-2004 NZ Bird Atlas (Robertson et al. 2007) as well as the Checklist of the Birds of New Zealand (Gill 2010) and is under constant review by the Records Appraisal Committee. Reportable species are always being added, and all rare reported birds can be seen on the Unusual Bird Report database. Some examples of a rare sighting would be;

What is a vagrant species?

A vagrant is a bird that has wandered far outside its expected and/or known breeding, wintering, or migrating range. The distance is the key variable here, i.e. a bird spotted just outside its normal range is not usually considered a vagrant species, however a bird spotted hundreds of kilometres from its known range is. These birds can therefore be from other continents and can sometimes have never been seen in an area before. The reason for them veering off course so much is still a mystery, but possible reasons include bad weather, inexperience amongst juvenile birds, genetic abnormalities affecting navigation, naturally inclined wanderers, hitch-hiking species on human vessels, and the pet trade. Examples of vagrant species noted in New Zealand are many, including Chestnut-breasted shelduck, Northern shoveler, little egret, black kite and buff-breasted sandpiper.

Understandably these rare species can create a lot of excitement amongst local birding communities and are one of many great joys birders experience. One of the key parts of such a discovery is documenting what you found. This not only allows that unique bird report to be appreciated and possibly found by others, but also to help gather good data and information for New Zealand Ornithology. These rare birds may only visit once or twice, but your record could be the first of what then turns out to be a new coloniser. Species we are now well accustomed to were once rare bird sightings, such as the first record of black-fronted dotterel in 1955 (Brathwaite 1955), and the first record of a welcome swallow from Stewart Island in 1954 (Sansom 1954).

Amidst the excitement of seeing a rare or unusual species, it’s important to keep your cool and start getting evidence! This evidence can be detailed notes, photographs, sound recordings or videos. This is your chance to provide unmistakable evidence to support your unusual observation. The more evidence you provide the better, so detailed notes on how you identified the species (particularly how you differentiated it from other species), alongside a handful of photographs or a short video is far better than just a quick note. Once you’ve taken all of those and enjoyed viewing the species, without disturbing it unnecessarily of course, what is the next process in New Zealand? Well, the first place to note your sighting would be eBird and then potentially with New Zealand’s Records Appraisal Committee.

We would already hope that at that stage you’re likely to be compiling your sightings into a complete checklist in eBird to submit to the NZ Bird Atlas! If so, what you will have noticed when searching for that rare or unusual species, or submitting a high count, is that the eBird app, or the portal, will likely have flagged an automatic data quality filter. These are set to detect rare/unusual species or counts on everyone’s checklists for a group of expert volunteer reviewers to check. These filters help continuously capture and monitor data quality. Before you can submit the checklist, eBird will ask you to ‘fix’ certain accounts online as shown below:

A rare sighting of an Okarito kiwi (Rowi): 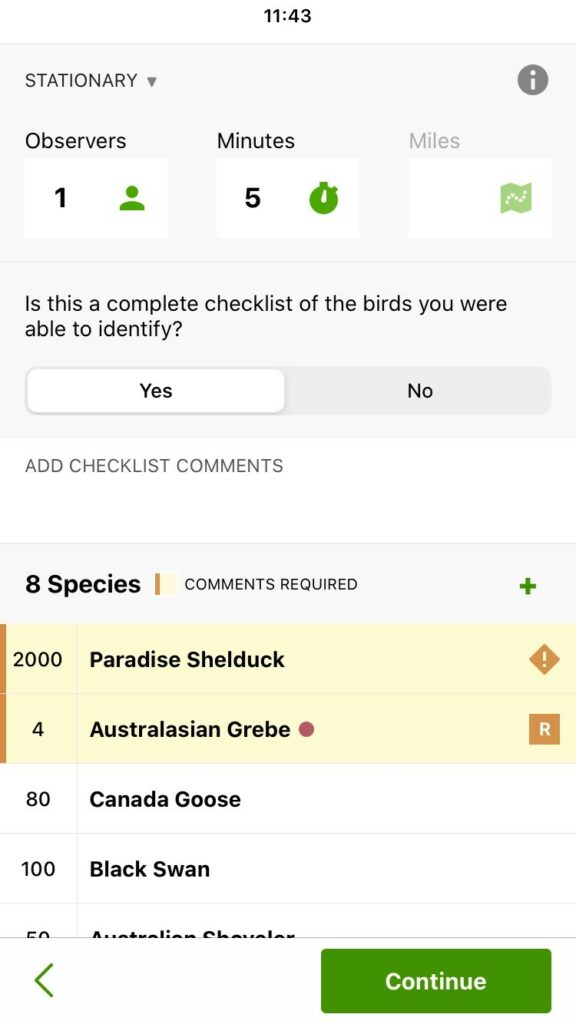 eBird won’t let you submit the checklist until you’ve provided your detailed comments, so this is another reminder that you need to gather some evidence! eBird has provided some fantastic guidance on reporting species. Remember you don’t need an expensive camera or microphone to provide valuable evidence, a photo taken through binoculars or a sound recording from your smartphone are still valuable pieces of information! Don’t forget to include notes on how you distinguished it from other species. This will make it easier for the volunteer reviewer to accept or correct your sighting, saving both you and them time!

A recent example of using photos to document a rare sighting of gull-billed tern by Glenda Rees. Notice she has added photos and comments, and submitted it as part of a complete checklist – awesome work Glenda!

Once you’ve submitted your rare or unusual sighting to eBird and the NZ Bird Atlas portal (if the sighting is between 1st June 2019 – 1st June 2024), it may be tempting to think you’re finished, but there is now a potential second step we’d expect you to do! Any species that is on the list of reportable species, and/or not in the Checklist of the Birds of New Zealand (Gill 2010) should then be reported to the Records Appraisal Committee as soon as possible. It may constitute the first recorded sighting for the species in New Zealand, and so there will likely be many birders wishing to try and see it too remember! Sightings can be submitted online, simply fill in the online reporting form here. Unusual Bird Report (UBR) forms can also be downloaded at the bottom of the page, and completed forms submitted to the Records Appraisal Committee secretary.

If you have any queries or comments regarding the species listed, please email the Bird New Zealand Records Appraisal Committee Convenor.

Using eBird you can sign up for Rare Bird Alerts as well as get help listing your Target species, i.e. species you haven’t detected in this year, a certain month, or even a custom time. This can help you to hopefully see some rare birds or birds you’ve not yet seen before! You can find lots more information about this in this eBird Help Centre article.