Did you know that cuckoos cough up pellets much like owls? Or that their egg is one of the largest relative to body size of any bird? Or that cuckoo chicks have one of the shortest development periods of any bird? Their silent skulking in dense thickets, combined with a short breeding cycle, makes cuckoos notoriously difficult birds to confirm breeding. This month we spotlight one of the cuckoo species that breeds in NY, the Yellow-billed Cuckoo, although many of the tips also apply to Black-billed.

The diet of adult and nestling cuckoos is similar. They tend to rely most heavily on caterpillars, including hairy caterpillars that are inedible to many other birds. The caterpillars’ hairs pierce the cuckoos’ inner stomach lining and eventually this interferes with digestion. At that point, the cuckoo coughs up a pellet of stomach lining and hair, and carries on munching caterpillars, repeating the process as needed. Other important diet items include katydids, grasshoppers, and cicadas.

Their nest is a flimsy affair constructed mostly of dry twigs, somewhat recalling the notoriously poor structures that doves deem nests. Eggs are often visible through the nest’s exterior. Whether they build a shallow cup or just a platform, they build the well-concealed nest on a horizontal branch or wedged into a fork 3–20 feet off the ground. Cuckoos have something of a continuous construction technique, where males add to the nest throughout incubation. Their strategy of quickly building a loose structure with ongoing reinforcement supports their approach to reproduction: make the most of an abundant, ephemeral food source.

Both cuckoos are facultative brood parasites, meaning that they will lay their eggs in other birds’ nests if they want to. They may parasitize their own species, their sister cuckoo species, or other species such as American Robins, Wood Thrushes, Chipping Sparrows, or Gray Catbirds. Cuckoos likely parasitize nests more often when food is abundant and energetic constraints are lower. On the other hand, Brown-headed Cowbirds—an obligate brood parasite—are unable to successfully parasitize cuckoo nests because cowbird eggs take longer to incubate than cuckoo eggs.

Both cuckoos are widespread across the state at lower elevations outside the Adirondacks. They require dense, shrubby areas near water, such as thickets at the edges of orchards, agricultural fields, urban parks, and roadways. Cuckoos are more abundant in years when more food is available, such as tent caterpillar, gypsy moth, and cicada outbreaks.

As denizens of thick, scrubby vegetation, the easiest way to find them is by listening for their distinctive song and calls. They tend to be more vocal on cloudy days, giving them the name “rain crow” in some parts of their range. They are also vocal at night, so you may hear them if you are after dark.

Kowlp call. An accelerating series of ka syllables that transition to several repeated kowlp notes. Given from a high perch, concealed in foliage, in fight, or upon landing. (Black-billed Cuckoos give a faster series of ka syllables and don’t have the kowlp ending.) Kowlps mostly given by males (undocumented in females) and may help in defining territories and to call mate to him.

Knocker call. A moderately rapid series that has been likened to the sound of a door knocker striking its plate. Given by both sexes, probably to communicate about feeding and nest tending duties.

Coo call. A coo note repeated 5–11 times at regular intervals. After a 7–10 second pause, the coo series is repeated. Typically given from an exposed perch. Given by both sexes during courtship. While not as dramatic to our ears as the kowlp call, the coo calls function as their song.

Yellow-billed Cuckoos lay an exceptionally large egg for their size—one of the largest relative to their body size of any bird—that promotes the embryo’s rapid development. Incubation requires a mere 9–11 days and the nestling fledges at eight days old—also one of the shortest cumulative development periods known among birds. But this expeditious progress comes at a hefty cost for the female: producing one egg requires about a third of her daily energy intake. Every other day, she lays one of her clutch’s 2–3 light-blue eggs. Incubation begins after laying the first egg. To offset the substantial cost of egg production, the male does the majority of incubation. During the day, both sexes share duties equally. At night, the male takes over. The chicks hatch asynchronously; if there is insufficient food available for the entire brood, the parents will remove the youngest from the nest.

One of the advantages of entering breeding codes on every checklist even if you’ve already documented the behavior, is that we gain a fine-scale look at breeding phenology. If we plot each breeding code by date of observation, we can see when each species is mostly engaged in courtship, nest building, or raising young. The phenology chart for Yellow-billed Cuckoo based on data from 2020 (below) shows that they arrive and start singing in mid-May. Courtship courtship takes place mostly in June. There were few observations of nests and basically no observations of nest building, but presumably these behaviors also occur in June because fledglings and young are observed in July and into August. 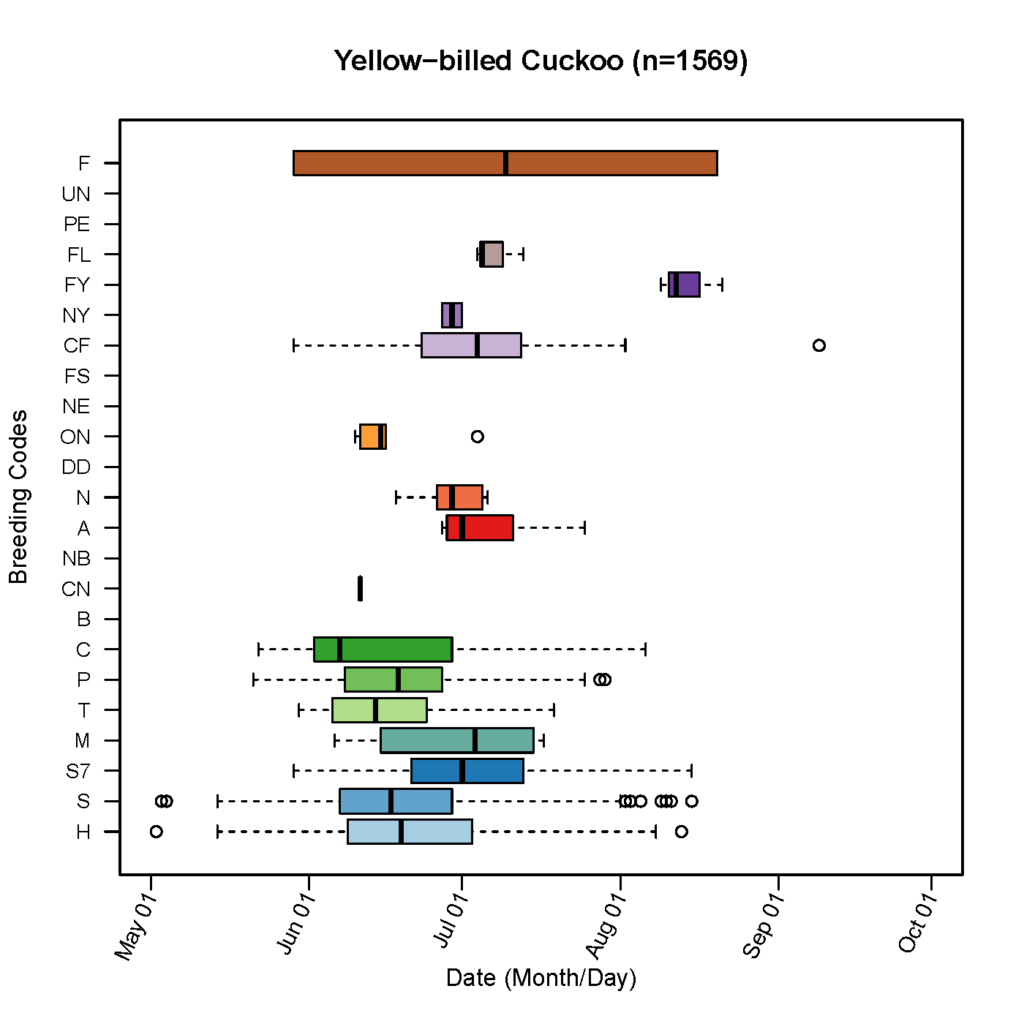 Breeding phenology plot showing the time of year each breeding behavior was recorded for Yellow-billed Cuckoo based on 2020 Atlas data (1569 observations through September). Standard box plots with median and first and third quartiles plotted. Based on raw, unvetted data.

Late-August–early-October: loafing, getting fat, and staging for migration

The secretive nature of cuckoos makes them hard to find, and their short nesting and fledgling period makes it hard to confirm breeding. Here are some of the more common behaviors you might observe.

Copulation. Perched on a branch, the female leans forward and cocks her tail upright, then tucks it low, repeating the tail pumping several times. The male watches from a nearby branch, snaps off a twig, and flies toward the female. He lands on her back, and offers her the stick—if a female is truly lucky, she might receive a caterpillar. The pair holds either end of the stick and commences copulation. Three to five seconds later, the deed is done and the male flies to a new perch, still holding the stick.

Territoriality. More study is needed. While there are some observations of birds displacing intruders (akin to typical territorial behavior), some studies suggest that neighboring birds will space their breeding attempts apart in time so that they aren’t raising young at the same time.

Agitation/mobbing by other birds. You may be able to find a cuckoo on nest by the behavior of other birds. Birds that are subject to nest parasitism by cuckoos, such as Wood Thrush, American Robin, and Gray Catbirds, may mob and attack cuckoos when the cuckoos come and go from their nest. This can alert you to probable nesting of the mobbing species and possibly indicate the nesting location of the cuckoo.