Piping Plovers are iconic birds of coastal dunes, but did you know that they also nest inland on the Great Lakes?

There are three distinct populations of Piping Plovers. The Atlantic Coast and Northern Great Plains populations are federally listed as threatened, and the Great Lakes population is endangered. Most of us are familiar with the coastal population on Long Island (we confirmed them breeding in 26 blocks this year), but one of the conservation success stories of the last few years is the return of a few individuals to Lake Ontario. And this year we celebrated two fledglings (see above photo)!

Two fledglings might not sound like a big deal, but it is. The Great Lakes Piping Plover population has never been abundant, with a historical high of at most 800 pairs, but after a low of 12 pairs in 1990 it is making a slow comeback. In 2020 there were 64 pairs across the Great Lakes with one pair was on NY’s shores at Sandy Island Beach in Pulaski (Oswego County). See Atlas block Ellisburg SW.

Plovers returned to Lake Ontario’s NY shoreline in 2015 and have been returning to the same area since. The previous nesting record was in 1984 (documented in the first Atlas) and before that 1955, down from a high of 14 pairs in the 1930s. But now there is a group of dedicated biologists working to create a safe space for them to return and raise young.

Claire Nellis is the Piping Plover Project Coordinator with OPRHP at Sandy Island Beach State Park. She spent this summer at the park monitoring the lone returning pair. Claire and her colleagues installed an exclosure around their nest, put up ropes and signs to block off the surrounding habitat, and educated the public about how to minimize their disturbance of the birds. The exclosure works to prevent predators from getting to the nest and chicks, while a large part of the outreach focuses on keeping dogs on leash. Keeping dogs on leash is so important that they created a leash lending program and loan leashes for free to beach goers that didn’t bring one to the beach. 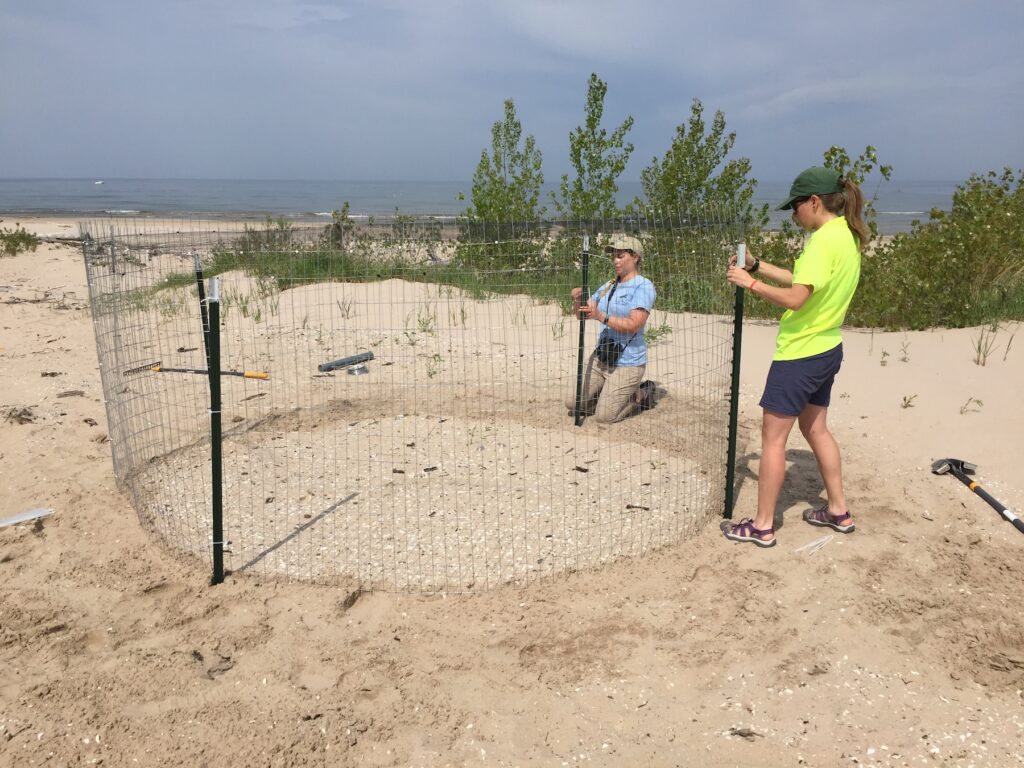 While nest disturbance is perhaps the biggest threat to the returning pair, habitat loss is a more insidious threat to the population as a whole, both on the breeding range along the Great Lakes and on their wintering grounds along the southeast coast. Some efforts are planned to improve nesting habitat in NY at Lakeview Wildlife Management Area just north of Sandy Island. 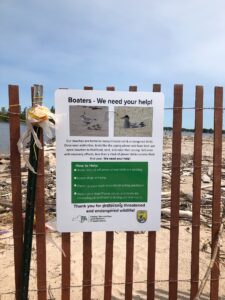 Fencing and educational signs installed around the Piping Plover habitat.

Claire is looking forward to watching more of their entertaining courtship rituals next summer. She describes their courtship display:

“Males will circle over his territory with stiff, deep wing beats while peeping constantly. Males will build scrapes by laying on their belly and pushing sand out in a bowl shape with their back legs. While scraping, the male does quick staccato peeping. The female often observes and seemingly approves or disapproves of the potential nest. Once she has deemed a scrape good, the male lowers his head and fans out his wings and tail near the prospective nest site while the female moves under him. The male may also approach the female standing very tall with his chest puffed out. He will take very short steps kicking his feet high, ‘goose stepping’ over to her. If the female stands, copulation often follows.”

Below is a calendar and short description of breeding behaviors to help you discover this rare species whether on the Great Lakes or Long Island.

Parallel Walk: Individuals from adjacent territories walk shoulder-to-shoulder along the boundary between their territories.

Scraping: Males make a d epression for their nest by digging their chest into the sand and rocks and kicking excess material behind them. He gives a distinctive, rapid peeping only heard during nest scraping.

Tilt Display: Males tilt their heads down 30 degrees while fanning out their wings and tail in front of the female and peeping constantly.

Goose Step: Males approach females for copulation by walking upright with chest puffed out and raising legs and feet out in front of them (like a high marching step).

Stone tossing: Some pairs will line their nest with small rocks and shells in a ritualized manner, usually soon after copulation.

Broken-wing Display: Like other shorebirds, adults will feign injury to lure predators away from the nest and young.

Crouching: If a predator is nearby, they will crouch down low to the ground and use their camouflage to avoid being detected.