Swifts are often described to new birders as “cigars on wings” because of their cigar-shaped body and sickle-shaped wings. When they arrive in the spring, their fast fluttering is a constant sight in cities at dawn and dusk accompanied by their incessant twittering, a fast series of buzzy, insect-like chip notes. While swifts are widespread, much of their breeding biology is still unknown because they spend so much time in the air and nest in inaccessible chimneys and hollow trees.

Nests are built of small twigs adhered to a vertical wall of wood or stone with saliva. Both parents will snap small dead twigs from trees mid-flight with their bill and carry them back to the nest. 4-5 eggs are laid when the nest is only half-finished and both parents take turns incubating and completing the nest. After an incubation period of ~19 days, the nestlings are fed for about a month before they take their first flight and emerge from the nest site. Fledglings return to the nest site for 1-2 weeks longer before they join the adults at communal roosting sites.

Swifts start flying post-dawn and go to roost at or near dusk. While often found during those crepuscular periods by their twittering, they could be nest-building or feeding young during any daylight hours from June into early August.

The best areas to find them are small towns to large cities with un-capped and unlined chimneys, although rural areas with silos or older farmhouses with chimneys should not be overlooked. In the north woods, they may be found many miles from human inhabitation, where they nest in large, hollow, dead trees.

One of the advantages of entering breeding codes on every checklist even if you’ve already documented the behavior, is that we gain a fine-scale look at breeding phenology. If we plot each breeding code by date of observation, we can see when each species is mostly engaged in courtship, nest building, or raising young.

The phenology chart for Chimney Swift based on preliminary data from 2020 (below) shows that swifts arrive at the end of April and start courtship flights in mid-May.  June and July are peak months of breeding activity. In 2020, there were a few observations of birds carrying nesting material at the end of May/beginning of June with birds visiting probable nests through June. Young birds were observed through much of July. Some confirmations can still be made in August or even early September, but beware after early August because Chimney Swifts also use chimneys for roosting as numbers build for fall migration (sometimes in large numbers). Most birds are gone from upstate NY by mid-September with some birds lingering into October in NYC and on Long Island. 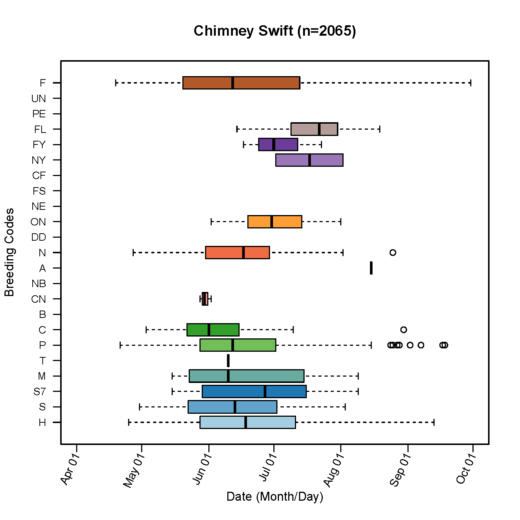 Breeding phenology plot showing the time of year each breeding behavior was recorded for Chimney Swift based on 2020 Atlas data (2065 observations through September). Standard box plots with median and first and third quartiles plotted. Based on raw, unvetted data.

While swifts spend most of their time on the wing fluttering by quickly, it is still possible to confirm this species if you know what to look for and when to look for it. Swifts do not really have a song, and specific breeding vocalizations are not well known, so the S, S7, and M breeding codes should not be used. Adults also have a pouch in their mouth that allows them to carry food unobtrusively, so you won’t see food being carried in the beak.

In appropriate habitat. Any place you see them, where there are houses with uncapped chimneys nearby, would warrant the use of the possible breeding code H to indicate their presence in suitable breeding habitat. Because chimney swifts will also nest in air vents, barns and other out buildings, hollow trees, and caves, there do not even need to be chimneys for nesting habitat to be nearby.

Pairs. Pairs flying close together, mirroring each other’s movements, and be coded as a pair (P). Simply seeing two swifts together in the same place is not sufficient to call them a breeding pair; they should be interacting in some way.

Courtship flights. The aerial courtship displays (C) of swifts consists of a V-display and trio-flights. In the V-display, pairs perform long glides with wings raised in a V-pattern and rock from side to side. This behavior starts within two weeks of arriving back on their breeding grounds and may continue throughout the summer. Trio-flights consist of three birds, one in the lead and two others chasing close behind, likely vying for the right to pair with the lead bird. Contrary to popular belief, swifts do not copulate mid-air.

Probable nests. Repeated flights into the same location. Swifts both roost and nest in chimneys. Swifts will visit roost sites during the day, especially if the weather is poor, but if you see a bird going into chimneys during the day in good weather, then it is reasonable to call it a probable nest site (N). Beware that unmated birds continue to roost communally throughout the summer, so if you see a lot of birds going into one chimney, it’s not a nest site.

Carrying nesting material. Keep a close eye on fast-flying swifts early in the season as this is when you may see them flying low through the tops of trees that have thin twigs. Watch closely to see if these swifts “stall out” in order to snap twigs off for their nests (CN). Sometimes it pays to take a photo and enlarge it later on the screen to confirm a twig was carried off.

Occupied nest. Since swifts rarely enter chimneys except to roost at night or when the weather’s inclement, any swifts entering chimneys repeatedly (~several times per hour) confirms breeding (ON). Once the young hatch, the parents will enter the chimney several times per hour. Be patient and watch closely, as swifts may slip in and out very fast and low and can easily be missed.

Nest with young. Another way to confirm breeding is to listen, usually from inside the house, for high-pitched chatter from the young when a parent brings in food (NY).

Chimney Swifts are listed as Vulnerable by the IUCN and were added to the US Fish & Wildlife Service Birds of Conservation Concern priority list this year. Their population, like so many other aerial insectivores, has drastically declined over the last few decades. Part of the population decline may be due to fewer suitable nesting sites. Modern chimneys are often capped (preventing access) or lined (which don’t provide a surface for them to attach their nest). Insect declines may also be a contributing factor. However, with so much basic biology unknown about this species, particularly on the wintering grounds, it is not clear what the main driver is. Some bird conservation organizations have started installing artificial Chimney Swift towers to provide additional nesting sites.