Among the most easily recognized breeding birds in NY is the Bald Eagle. A symbol of freedom and wilderness, casual and amateur birdwatchers alike enjoy seeing this bird any time of year.

Bald Eagles are readily identified by their sheer size with a 1.6-2.4 m wingspan. The head and tail of adults is a bright white that contrasts with the dark brown body and wings. Their large and powerful bill and talons are a bright yellow. Look for them near water bodies where they can catch (or steal) their favorite prey item, fish. If you see a pair perched side-by-side, you can identify the sexes by size with the female being about 25% bigger than the male.

Their nest is usually placed in a large, prominent tree, often the biggest tree around (e.g., White Pine and Sycamore trees). Nest trees are usually alive and sturdy, capable of supporting their enormous nests. Nests are often placed in a major fork of the tree near the trunk. Nests are on average 1.5–1.8 m in diameter and 0.7–1.2 m tall, with older nests that have been reused for many years being larger (see banner photo). Both adults gather large sticks they collect off the ground or break off from nearby trees which are used to weave the main nest structure. The nest bole is lined with finer materials and downy feathers from the breasts of the adults. They may have multiple nests in their territory that they can use variably from year-to-year or if the first nest attempt fails.

They lay 2 eggs (var. 1-3) spaced out over several days. Incubation lasts for 35 days. Parental care is shared by both adults, but the female does most of the incubation and brooding and the male does more prey capture. Young leave the nest at 11-13 weeks and are dependent on parents for up to another 10 weeks. Full adult maturity, marked by adult plumage and the ability to breed, is reached in the fifth year. The oldest known wild bird, banded in NY in 1977, lived to be 38 years.

Bald Eagles have made a tremendous comeback since the banning of DDT in 1972 and being federally listed in the Endangered Species Act in 1966. Populations have increased so much that they were removed from the federal endangered species list in 2007.

The New York State Bald Eagle Restoration Project began in 1976. Nearly 200 nestling Bald Eagles were collected from the wild (mostly from Alaska), transported to New York, hand-reared (i.e., hacked), and released. The hacking project ended in 1989 when ten breeding pairs were established. The NYS DEC is now engaged in finding, protecting, and monitoring nesting pairs. Bald Eagles are still listed as a threatened species in NY.

The successful recovery of eagles in NY is evident in the distribution maps from the three Breeding Bird Atlas projects. There were only 2 confirmed nests documented in the first Atlas from 1980-1985. In the 2000-2005 Atlas that number jumped to 124. As of this writing, Bald Eagles are already confirmed in 273 blocks, and the second breeding season has only just begun!

One of the advantages of entering breeding codes on every checklist even if you’ve already documented the behavior, is that we gain a fine-scale look at breeding phenology. If we plot each breeding code by date of observation, we can see when each species is mostly engaged in courtship, nest building, or raising young. The phenology chart for Bald Eagle based on data from 2020 (below) shows that nests building takes place mostly in February with pair bonding and courtship mostly documented in February and March. Nests were occupied (i.e., eggs were being incubated) in March and the first half of April. Most nestlings and fledglings are observed in April, May, and June. 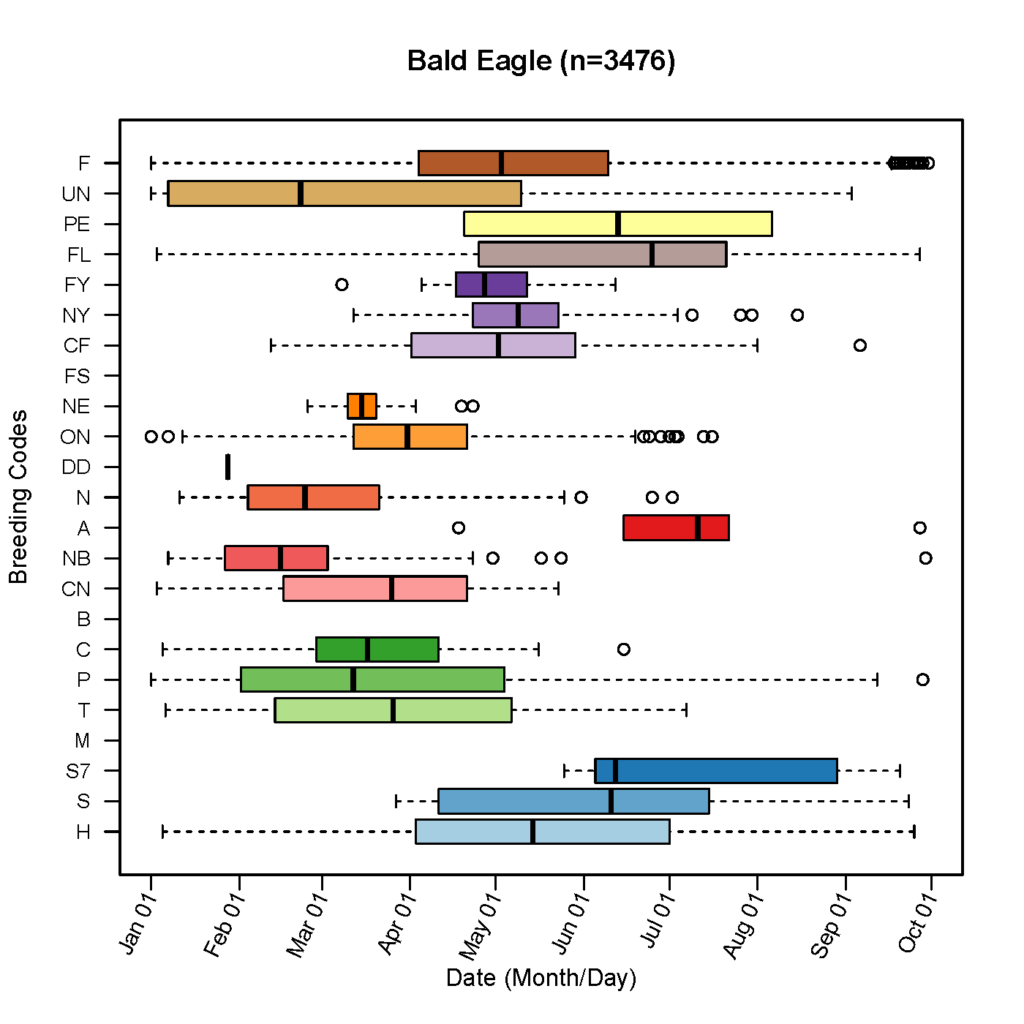 Breeding phenology plot showing the time of year each breeding behavior was recorded for Bald Eagle based on 2020 Atlas data (3,476 observations through September). Standard box plots with median and first and third quartiles plotted. Based on raw, unvetted data. Note that Bald Eagles don’t sing and should not be coded as such.

Cartwheel Display: This is a spectacular courtship display where the pair flies high up in the sky, locks their talons, and tumble down to the ground, only breaking each other’s grip at the last moment.

Chase Display: A courtship display where paired birds chase each other and sometimes lock talons, roll, and dive.

Roller-Coaster Flight: Another courtship display in which an eagle flies high up in the sky and then goes into a deep dive with wings folded in, swooping back up at the last instance to avoid collision with the ground.

Nest Maintenance: Resident birds can be seen carrying sticks and weaving them into the nest for repair any time of year, particularly before egg laying, during incubation, and again in the fall.

Threat Vocalization: Birds give a high-pitched squeal when the nest or young are approached by humans. This is a sign that you should retreat.

Territorial Chasing: Eagles generally avoid fighting and instead opt for the safer method of defending their territory of chasing intruders away. They will also chase away food competitors and nest predators, such as Osprey and Common Ravens.