Observing the spectacular “sky dance” display of the American Woodcock is one of the classic rites of early spring in New York.

Near dusk, a male starts giving “peent!” calls repeatedly from the ground, and eventually launches into the air, flying rapidly upwards in spiraling flight while producing a twittering wing sound. At the apex of his flight, he suddenly goes into free fall, floating back to the ground like a falling leaf while giving a distinctive chirping call. Then, just before reaching the ground, the male will resume powered flight, often landing in the exact same spot where he started, and announcing his return with more peent calls. 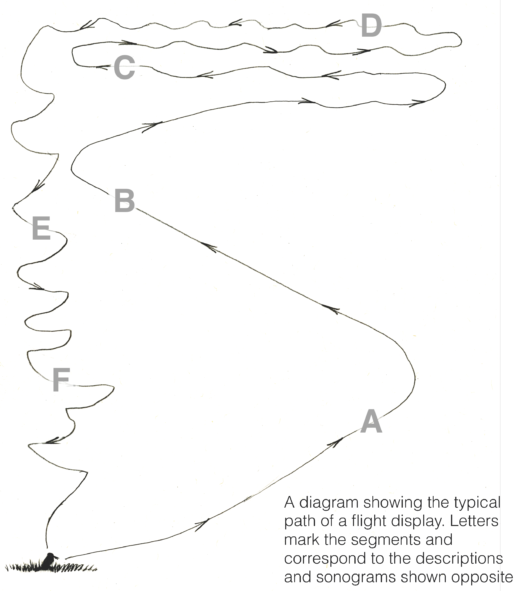 To experience this amazing aerial display, look for abandoned fields, meadows, pastures, bogs, power line cuts, and other openings with young forest nearby. Check out a satellite map of the priority block(s) you’re interested in covering, and pick out fields next to forest that look like they’re not short-cropped lawns. Powerline cuts can be great spots to target. Listen for the peent call (coded S) and the twittering of the bird in flight (coded C). The peent is given from the ground, and the twittering from the air.

The best time of day to see them is at dawn and dusk during civil twilight, which extends approximately 45 min after sunset and 45 min before sunrise (check your local civil twilight). Weather can affect their displays:  overcast weather causes them to start earlier in the evening, clear skies extend how long they display, wind reduces the likelihood of displays, and warm weather increases the likelihood of displays.

American Woodcock breed across the entire state (see the Atlas map). They start displaying on Long Island in early March, and courtship continues into June in northern New York. April and early May are good times to look for them across much of the state. 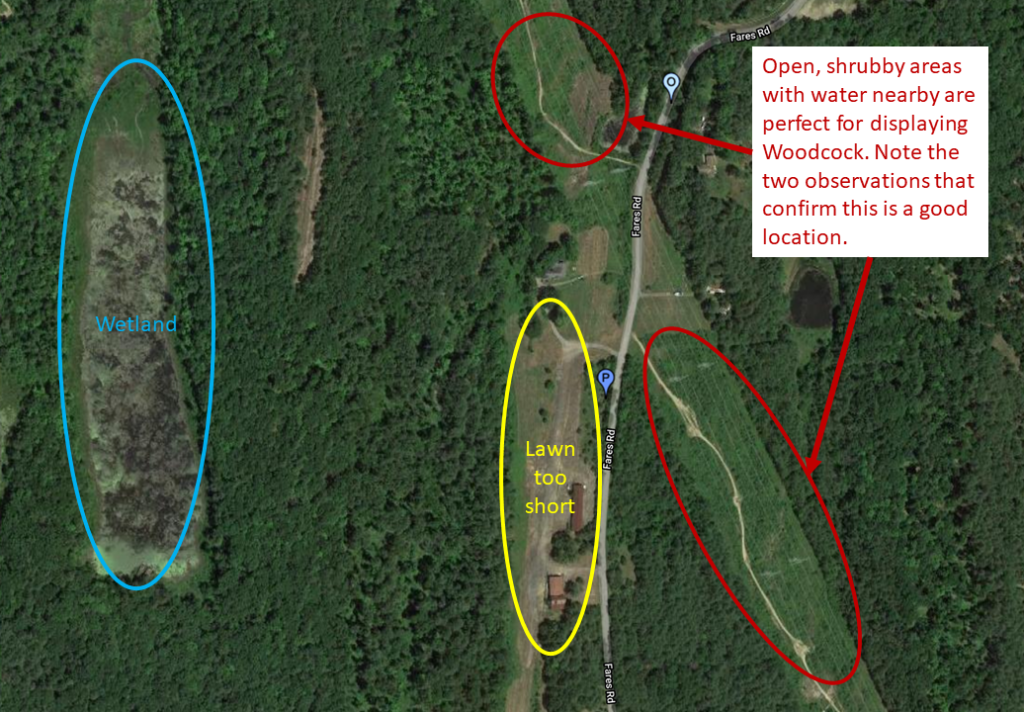 Look for open areas on satellite maps that show some ground cover indicating shrubby growth–the lush green in the powerline cut as opposed to the yellow-brown color of short-cropped lawns. This is important so the birds have cover but still open skies to carry out their courtship display flights. Having water and young forest nearby increases your chances as that indicates good nesting habitat.

One of the advantages of entering breeding codes on every checklist even if you’ve already documented the behavior, is that we gain a fine-scale look at breeding phenology. If we plot each breeding code by date of observation, we can see when each species is mostly engaged in courtship, nest building, or raising young. The phenology chart for American Woodcock based on data from 2020 (below) shows that courtship takes place mostly in March and April, but extends into June. Females are busy protecting the nest and young in April and May, while most fledglings were observed in June. 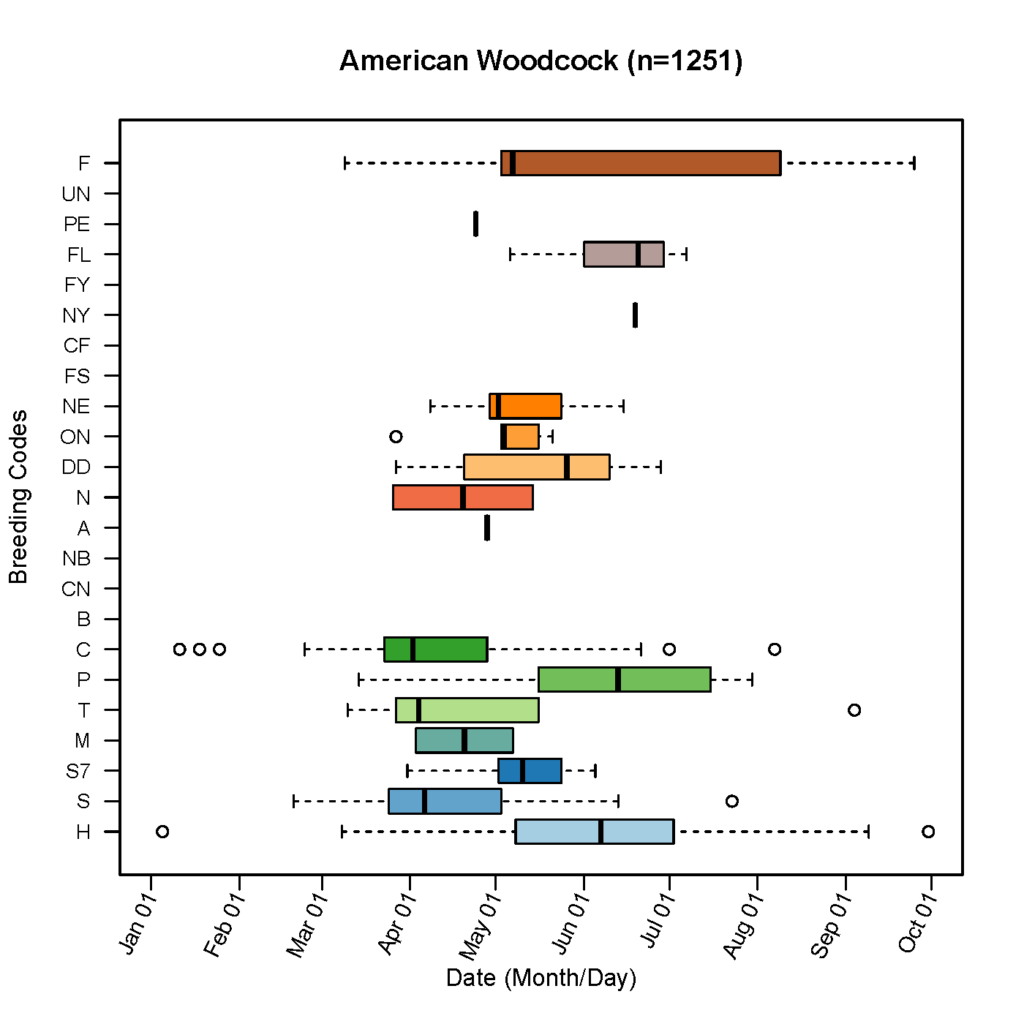 Breeding phenology plot showing the time of year each breeding behavior was recorded for American Woodcock based on 2020 Atlas data (1,251 observations through September). Standard box plots with median and first and third quartiles plotted. Based on raw, unvetted data.

Apr-May: Egg laying and incubation by female only

Behaviors for Look for

Courtship Flight: This behavior is actually easier to listen for, than watch for because it is given at dawn and dusk in low light conditions. The tell-tale sign is the loud “peent” that males give from the ground. Once you key on the peenting, listen for the twittering as they circle upward high into the sky and then chatter as they fall back down and land in almost the exact same spot they lifted off from.

Distraction Display: Females defend eggs and young by distracting potential predators. They try to lure predators away from the eggs or young and may give a whining call reminiscent of a cat.

Flushing: Woodcock are extremely well camouflaged and difficult to see during the daytime. Your best chances of seeing one are accidental when you walk past a nearby roosting or nesting bird. When flushed from dense cover, listen for high-pitched wing twittering and note the rotund shape and long bill. They might be confused with Wilson’s Snipe, but woodcock are not nearly as dark and patterned.

The Funky Walk: Woodcock have a peculiar walking style they use when foraging where they rock their bodies front and back between steps. Check it out in this YouTube video set to music.