Now that we are in the latter part of the breeding season, you may be starting to wonder how to determine if a block is done. A block is complete when it meets the block completion guidelines:

Some of these thresholds are easy to assess, while others take a little more effort.

1. Are there checklists from three different months?

Look at the checklist dates on the “Recent Visits” tab. For most blocks this will show you all the visits to a block. If you are in a highly trafficked block, you may need to look at the data for the different locations that have been visited. Click on the link to take you to a checklist for the location of interest (e.g., Robert V Riddell

On the “Recent Visits” tab, verify there are checklists from multiple locations. Then look at a satellite map of the block to identify the main habitat types in the block. For each habitat, check that birds commonly found in each habitat type are documented (use the “Overview” tab).

Note that not all habitats are accessible. If a particular habitat cannot be surveyed legally, do not trespass. 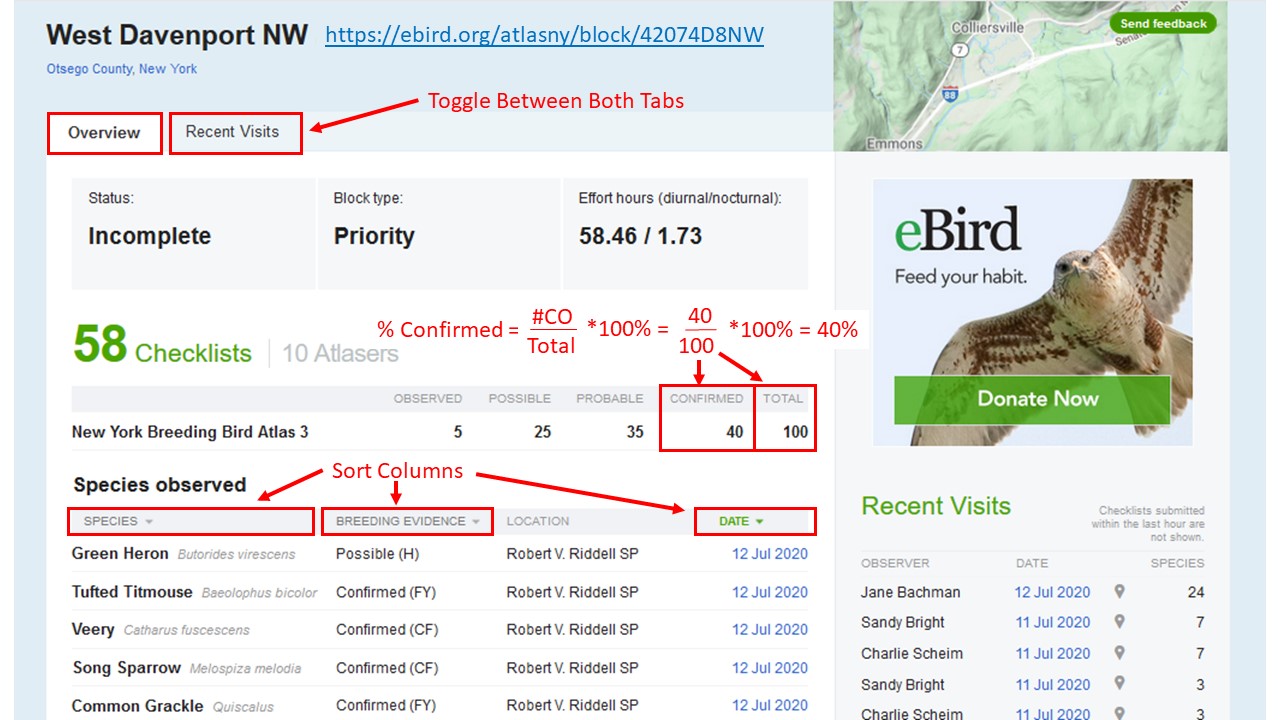 Where to look at on the block summary page to determine if a block is complete.

3. Are the time commitments met, particularly the nocturnal hours?

Look at the Effort Hours on the top of the “Overview” tab and make sure there are at least 20 daytime hours and 2 nocturnal hours. Then check that the hours spent were effective. Not all checklists are comprehensive and some birds are overlooked by beginner atlasers. To help assess how thoroughly a block was surveyed, check that a variety of breeding codes were used. If there are a lot of H’s and no M’s or S7’s, there’s a good chance a number of species could be bumped up to Probable breeding. On the “Overview” tab, sort by the different breeding evidence codes by clicking on the column label. Then scan down through the species and see if common species are listed as at least Probable, if not Confirmed. American Robin, for example, should be confirmed in nearly every block.

4. Is the number of coded species in the right range for that region?

On the “Overview” tab, look at the Total species. Then compare that number of species to neighboring blocks. You can also look at the county summary in which a block lies. Go to “Explore Atlas Regions” and type in the County. Alternatively, click on the county link below the block name at the top of the page. On the “Overview” tab, look at the list of species confirmed. There should be a lot of overlap between this list and the list of species for any block in that county. Also check that common birds are listed and confirmed (e.g., American Robin, Blue Jay, Gray Catbird, etc.).

I think this block is complete, now what?

If you believe a block is complete, please let your regional coordinator know. They will review the block data and forward it to the Project Coordinator if everything looks good. Completed blocks will show up on the Atlas Effort Map as black squares and the status on the block page will indicate that the block is complete.

When a block is considered complete, we ask that you divert your attention to other incomplete priority blocks. New sightings will still be accepted for completed blocks, and you should still submit such sightings if you notice them, but your help is more valuable if you can help complete other priority blocks.