This is a guest post by Greg Lawrence, a steering committee member based in Rochester, who surveys for marsh birds as part of his day job.

If you’ve struggled to see a Virginia Rail or an American Bittern hidden in the cattails only a few feet away from you, you are not alone. Secretive marsh birds are notoriously difficult to see, and one of the most important ways to code breeding birds is to watch for certain behaviors. So, how exactly do you document breeding codes for birds you can’t even see? And how do you actually see them? Follow along through the reeds and find out in this article.

In New York, we have two main groups of secretive marsh birds: rails and bitterns. Some of the rails, American Coot and Common Gallinule, are easy to see and can be downright abundant in some locations like Montezuma National Wildlife Refuge in the Finger Lakes. Thus, it can be easy to get possible codes by hearing them sing or seeing them in their appropriate habitat. Since these two species venture out into the open more than other rails, finding young coots or gallinules can be pretty easy and quite rewarding. Typically, these species will have fledglings from early June through August. 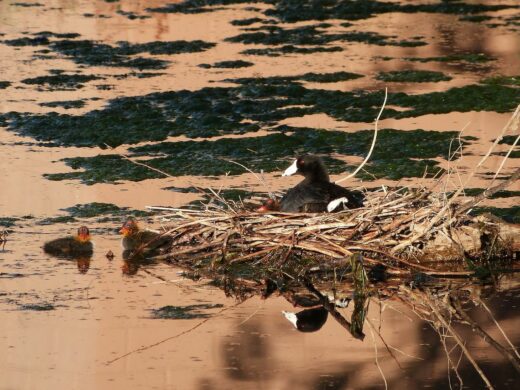 As for their cryptic relatives, Virginia Rail and Sora are the most widespread across New York State. Clapper Rails are also seen regularly, but mainly along the coast. Though very rare, three other rail species have nested in New York State: King, Yellow, and Black.

Virginia Rails are widespread and probably the most detected    rail species in this group. They prefer freshwater wetlands but will use saltwater or brackish marshes as well. Since they are most often detected by sound, it is not too difficult to get an S-Singing Bird or S7-Singing Bird Present 7+ Days code. Virginia Rails can be coded as “singing” when hearing their “kiddick” or “k-k-k-keerrr” calls, as both are given by males in the spring, with the latter likely a breeding call. When out birding in marshes, you’ll often hear the “grunt” calls of Virginia Rails, which can be coded as C-Courtship, Display, or Copulation, as these are given by pairs during the breeding season. Virginia Rails can usually be heard early in the breeding season, so it is worth getting out early in May to listen for this species. 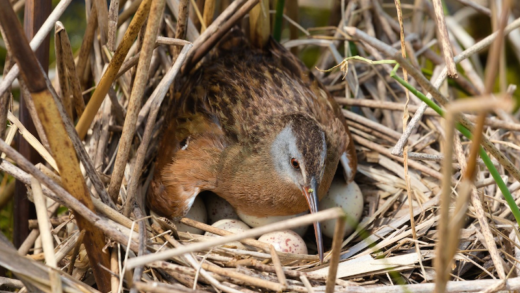 Soras are less common, but still widespread across the state. These also prefer freshwater wetlands, but typically more shallow ones than those occupied by Virginia Rails (though they overlap a lot), and often with more grasses, sedges, and rushes. Another difficult to spot species, Soras are most easily detected by sound. They can easily be detected in early May right after returning from the south and often during second nesting attempts in mid-late June. Their descending “whinny” call is heard often and can be coded as S or S7, as it is used by mated pairs and when birds are establishing territories. Their other well-known call is the “ker-wee,” which is likely used to attract mates, so this can also be coded as S or S7.

The Clapper Rail is found downstate from Westchester County (Marshlands Conservancy is an excellent spot to detect these) to c   oastal New York City and Long Island. This species prefers saltmarshes, where it is easy to hear the male’s repeated “kek” calls, which are primarily used in attracting a mate and can be coded as S or S7. Further, their “grunt” or “clapper” calls are used by paired birds and can be coded as C, since these are used by paired birds often duetting. They also make a handful of other calls, though their purpose is not very well understood. These can likely be coded as H-In Appropriate Habitat. 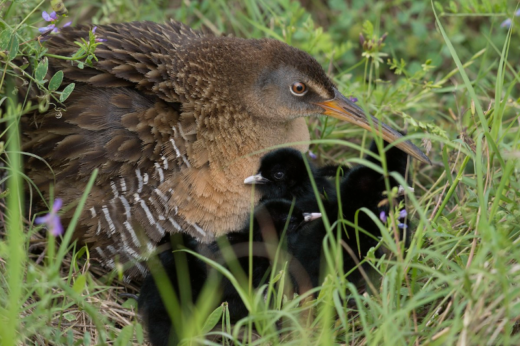 Lastly, we’ll tackle the Bitterns—Least and American. American Bitterns are often seen earlier in the year than Least, but both species can have eggs by mid-May. American Bitterns prefer freshwater wetlands with tall vegetation. They have one of the most unique bird sounds and were often referred to as “thunderpumpers.” Their main calls start as a series of clicks and gulps, followed by “onk-a-chonk,” and these are primarily used to attract mates and mark out territories. This can be coded as S or S7. Aside from an occasional call when flushed, American Bitterns are generally silent. Least Bitterns are found in freshwater, though sometimes brackish marshes with lots of emergent vegetation. Males will give a “cooing” or “chuckling” call, which is used to attract a mate and can be coded as S or S7. They can give a few other vocalizations, which can be coded as H. 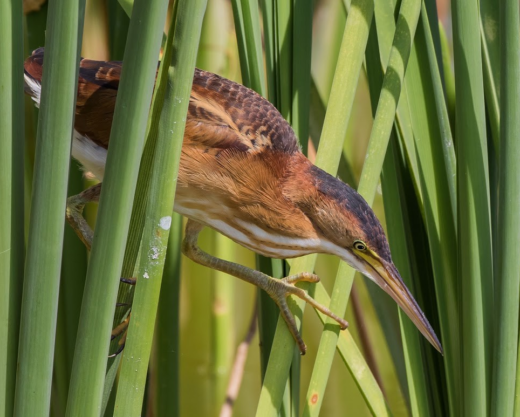 Observing rails and bitterns can be difficult and can take a lot of patience near an opening or at the edge of vegetation. However, when visible, these species can be very tolerant of human presence. I’ve had Virginia Rails walking around my feet while doing marsh bird surveys, and Least Bitterns standing just inches away, not minding my presence at all, while I was walking through cattails! Kayaking or canoeing in wetlands can be extremely helpful, especially later in the season when you can spot young rails following their parents around. Kayaking is also an excellent way to spot bitterns, especially Least Bitterns flying across channels in the marsh. Nest searching is not advised unless you are experienced walking through dense vegetation in wetlands, though it can be extremely rewarding when you find a nest of neatly woven marsh vegetation. Early in the season, listening at dawn, dusk, or even at night can be an excellent way to hear rails and bitterns, as they vocalize quite a bit when it gets dark out.

In the end, these species take a lot of patience to observe, often requiring extra effort at night or surveying from the water, especially before the main breeding season. However, when you do detect these species, it is extra rewarding!