Big Atlas Weekend 2021 was a success! All four participating Atlas projects had great turnout the weekend of June 25-27. By now, many atlasers have figured out that the best atlasing period is late June through early July, which is why we’ve started this annual mid-summer competition. It was a great time to be out with lots of babies hatching and needing to be fed.

Despite the hot, windy weather here in NY, 435 atlasers participated! Of the 217 species that have been confirmed breeding in the state to date, 206 of them were documented over the weekend, including 12 species of grassland birds and some species seen in NY and nowhere else. Looking at several different measures, we had a clear increase in participation over the same weekend in 2020.

While NY didn’t win the overall championship (more on that below), we clearly have a highly dedicated and diverse group of atlasers in the Excelsior State. Next year we’ll be coming for you, Maine!

By many measures, NY atlasers are absolutely amazing. This is the third Atlas in the state, and a lot of experienced atlasers are putting their skills to work while many others are just getting hooked. Here are some of the achievements from the first Big Atlas Weekend.

The main goal of the Big Atlas Weekend was to increase awareness of breeding birds and Breeding Bird Atlas projects. To assess how well we achieved that goal, we looked at a few different benchmarks set last year. Here is the breakdown by category of how 2021 compared to last year, showing an increase in participation across the board. 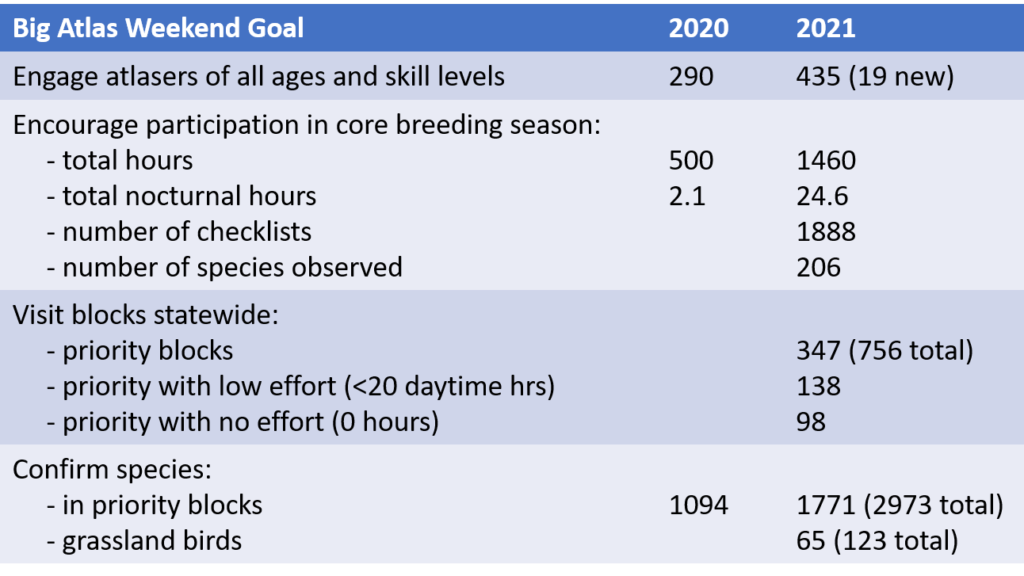 Goals of the Big Atlas Weekend comparing stats (where available) from the same weekend in 2020 to 2021. We saw an increase in all measured categories!

When we look at all the states combined, we had a bevy of 1001 atlasers out in all four participating areas who spent a total of 3276 hours making 6169 confirmations! These are impressive numbers considering this was the first ever Big Atlas Weekend!

Everyone who participated received a free introductory bird identification course from the Bird Academy at the Cornell Lab of Ornithology.

NY had a higher showing in all categories except nocturnal hours—another great achievement. Despite this, when we compared effort across states and adjusted for the number of atlasers and the geographic size of each state, Maine came out the overall winner. Maine is in the 4th year of their Atlas and the atlasers there are incredibly efficient. Just look at the average number of confirmations per atlaser in ME compared to NY, 6.4 vs 3.4—nearly double!

The winners of the statewide challenges received a free course of their choosing from the Bird Academy. Winners were randomly selected from all eligible checklists in each category. Congratulations to these NY winners!

Challenge winners (above) were randomly drawn from all eligible entries in each category, but we thought the top atlasers over the weekend also deserved a little of the limelight. Here are the top 5 atlasers (more where there was a tie) by checklists, codes, hours, and blocks. Congratulations on being a rockstar atlaser! 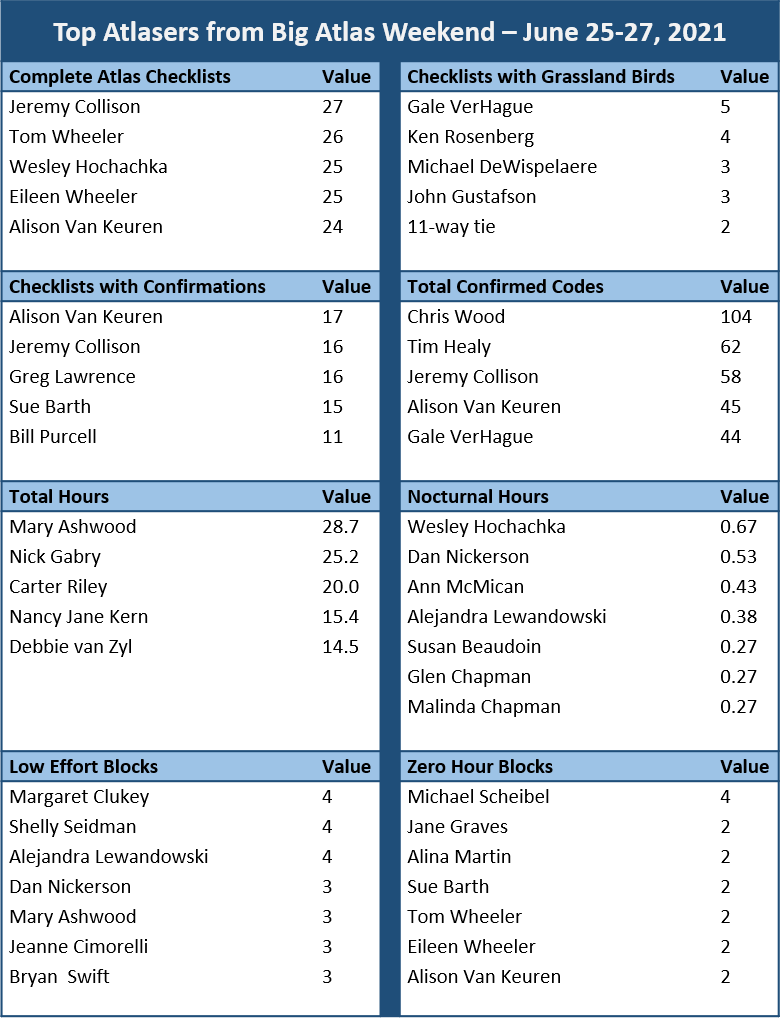 Top 5 atlasers in each category (more names appear if there was a tie) and the number of checklists, codes, hours, or blocks per person in that category.

The Big Atlas Weekend coordinators had a great time organizing this year’s event, so much so, that we’ve already started discussing the details for 2022. We hope to expand to other Atlas projects since this year was such a success.

And we are all going to be gunning for that trophy, so Mainers better watch out!

If you missed the kickoff, training session, or awards night, you can still learn what eye flecks tell you about identifying female birds, get a refresher on the Atlas Essentials, and watch the awards ceremony on our YouTube channel.

If you have any questions about the event, including if your Atlas project would like to get involved, please contact a participating Atlas project coordinator. In NY, email Julie.