History of the Atlas

An atlas is a collection of maps. Maps visualize location-specific information in a condensed format that allows users to find information at a glance. In the mid-1960s, The Golden Guide to the Birds of North America introduced a revolutionary innovation: range maps. While other guides available at the time had brief, written range descriptions, these range maps showed the seasonal distribution of each bird species featured in the guide and allowed readers to quickly see if a bird was out of range or season. For example, a birder in central Georgia in June could focus on Acadian Flycatcher rather than Least Flycatcher, because the range map showed the Acadian bred in Georgia, but the Least did not.

At about the same time these range maps were being published, naturalists in the United Kingdom and Ireland were enlisting volunteers to map plant (1952–1959) and bird (1968–1972) distributions using a 10 x 10 km grid superimposed on the landscape of Britain and Ireland. Chandler Robbins, the main drafter of the Golden Guide’s range maps, recognized the value of bird maps for showing in detail where birds lived. Such detail would give scientists, conservationists, and wildlife agencies current and accurate data about whether a bird was widespread or localized and where their habitat existed.  If such surveys were repeated, they would also show how birds responded to changes in climate, land use, and other environmental changes.

Robbins encouraged the Maryland Ornithological Society to conduct the first breeding bird atlases in North America. These were county surveys conducted in the 1970s and were published late in the decade. The first statewide atlas projects were completed over the ensuing decade in Massachusetts and Vermont. By now, many states and provinces have produced bird atlases. Several, including Maryland and DC, have completed second breeding bird atlas projects. Now two regions, New York and Maryland and DC, have embarked on their third. 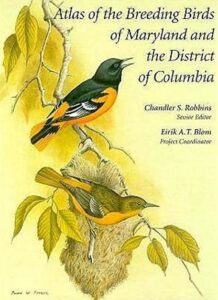 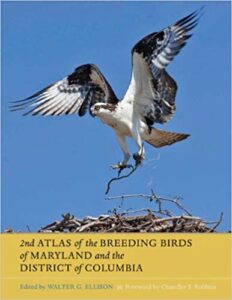